Astronomers capture a test image with the ALMA telescope, showing the Antennae Galaxies in wavelengths roughly one thousand times longer than visible light.

The world’s most complex ground-based astronomy observatory — the Atacama Large Millimeter/submillimeter Array (ALMA) — has officially opened for astronomers. The first released test image (on October 3, 2011), from a telescope still under construction, reveals a view of the Antennae Galaxies that cannot be seen at all by visible-light and infrared telescopes.

At present, around a third of ALMA’s eventual 66 radio antennas, with separations up to 125 meters (137 yards) rather than the maximum 16 kilometers (10 miles), make up the growing array on the Chajnantor plateau in northern Chile.

ALMA’s view shows something that cannot be seen at visible or infrared wavelengths: the clouds of dense cold gas from which new stars form. The ALMA observations were made at specific wavelengths of millimeter and submillimeter light, tuned to detect carbon monoxide molecules in the otherwise invisible hydrogen clouds, where new stars are forming. Image Credit: ALMA

ALMA is radically different from visible-light and infrared telescopes. It is an array of linked antennas acting as a single giant telescope, and it detects much longer wavelengths than those of visible light — roughly one thousand times longer than visible-light wavelengths. Its images therefore look quite unlike more familiar pictures of the cosmos.

Using these longer wavelengths will allow astronomers to study extremely cold objects in space — such as the dense clouds of cosmic dust and gas from which stars and planets form — as well as very distant objects in the early Universe.

To capture this test image of the Antennae Galaxies, astronomers used only twelve antennas working together — far fewer than will be used for future observations — and with the antennas much closer together, as well. Both of these factors make the new image just a glimpse of what is to come. As the observatory grows, the sharpness, efficiency, and quality of its observations will increase dramatically as more antennas become available and the array grows in size. Larger separations mean sharper images; and if more antennas are working together, more detailed images will be possible.

The Antennae Galaxies (also known as NGC 4038 and 4039) are a pair of distorted colliding spiral galaxies about 70 million light-years away, in the constellation of Corvus (The Crow). This view shows a comparison of the ALMA observations (left) with visible-light observations from the ESO Very Large Telescope. Image Credit: ALMA and ESO/Alberto Milani

Massive concentrations of gas are found not only in the hearts of the two galaxies but also in the chaotic region where they are colliding. Here, the total amount of gas is billions of times the mass of our sun — a rich reservoir of material for future generations of stars. Observations like these open a new window on the submillimetre Universe and will be vital in helping us understand how galaxy collisions can trigger the birth of new stars.

Over the last few months, astronomers from around the world have submitted over 900 proposals for observations at ALMA — a record for a telescope.

Masami Ouchi of the University of Tokyo in Japan will use ALMA to observe Himiko, a very distant galaxy churning out at least 100 suns’ worth of stars every year and surrounded by a giant, bright nebula. Ouchi said:

Other telescopes cannot show us why Himiko is so bright and how it has developed such a huge, hot nebula when the ancient Universe all around it is so calm and dark. ALMA can show us the cold gas deep in Himiko’s star-forming nebula, tracing the movements and activities inside, and we will finally see how galaxies started forming at the cosmic dawn.

By 2013, ALMA will be an array up to 16-km wide with 66 ultra-precision millimetre/submillimetre wave radio antennas working together as one telescope and built by ALMA’s multinational partners in Europe, North America and East Asia. 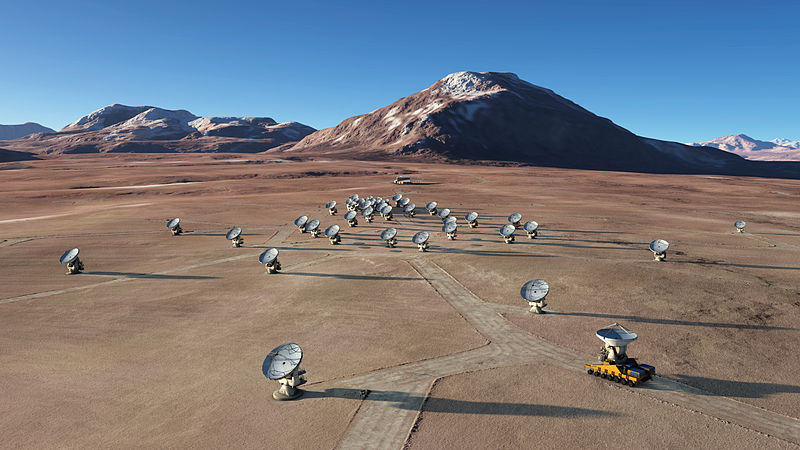