Astronomers have evidence for 3 infant planets forming in a disk around a newborn star. They say their new observing technique could find some of the youngest planets in our galaxy. 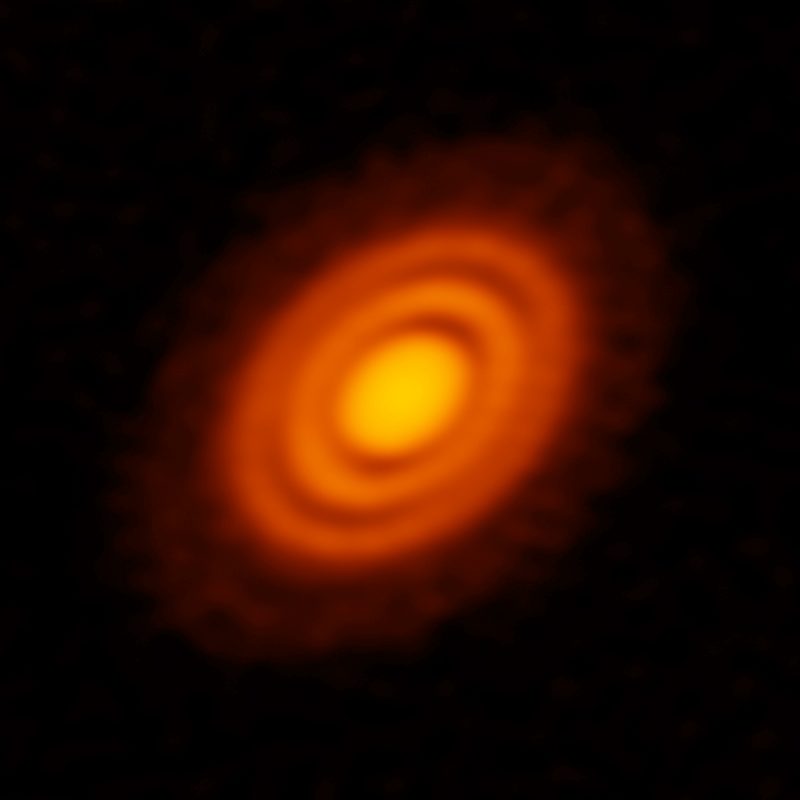 ALMA image of a disk of material surrounding the young star HD 163296. This dusty disk has been known since 2016 to have gaps in it, presumably from newly forming planets. Now astronomers see disturbances in the disk, indicating where 3 new planets are moving within the disk. Image via ALMA (ESO/NAOJ/NRAO); A. Isella; B. Saxton (NRAO/AUI/NSF).

Two independent teams of astronomers said on June 13, 2018, that they’ve uncovered convincing evidence for three young planets orbiting within a protoplanetary disk – or planet-forming disk – around an infant star. The star is called HD 163296. It’s 330 light-years from Earth in the direction of the constellation Sagittarius. And it’s young – really young in astronomical terms – only about 4 million years old. That’s in contrast to our sun, with 4+ billion years under its belt. These astronomers used the ALMA telescope in Chile and a new planet-finding technique. What they’ve seen are three discrete disturbances in the young star’s gas-filled disk. They said this is:

… the strongest evidence yet that newly formed planets are in orbit there.

ALMA stands for Atacama Large Millimeter/submillimeter Array, and this telescope has been used extensively to study protoplanetary disks since it went online officially in March, 2013. The disks around very young stars like HD 163296 are filled with gas and dust. Stars themselves – and their planets – are born out of this material. So studying the disks is like the studying the birth throes of our own Earth and sun.

The two teams of astronomers both used ALMA in conjunction with a new planet-hunting technique that identifies unusual patterns in the flow of gas within a protoplanetary disk.

The astronomers reported their results in two separate journal articles, both in the peer-reviewed Astrophysical Journal Letters. The full references are listed at the bottom of this article, and you’ll find the actual papers online here and here.

Rather than focusing on the dust within the disk, which was clearly imaged in earlier ALMA observation, the astronomers instead studied the distribution and motion of carbon monoxide (CO) gas throughout the disk. Molecules of CO naturally emit a very distinctive millimeter-wavelength light that ALMA can observe. Subtle changes in the wavelength of this light due to the Doppler effect provide a glimpse into the kinematics – or motion – of the gas in the disk.

If there were no planets, gas would move around a star in a very simple, predictable pattern known as Keplerian rotation.

But that’s not what these astronomers saw. Instead, they saw disturbances in the gas. Christophe Pinte of Monash University in Australia, lead author on one of the two papers, said:

It would take a relatively massive object, like a planet, to create localized disturbances in this otherwise orderly motion. Our new technique applies this principle to help us understand how planetary systems form.

These astronomers are hopeful their technique can be applied to other young stars throughout the galaxy, in order to study some of our galaxy’s youngest planets.

Read more about the two new studies from NRAO 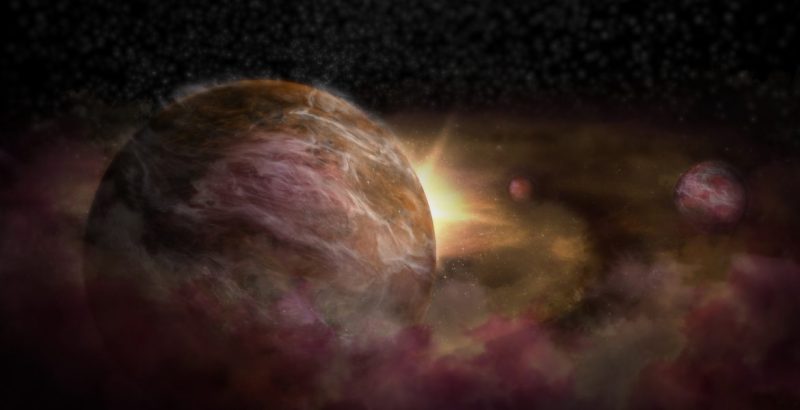 Artist’s concept of protoplanets forming around a young star via ALMA (ESO/NAOJ/NRAO); A. Isella; B. Saxton (NRAO/AUI/NSF).

Bottom line: Astronomers using the ALMA telescope in Chile – and a new planet-hunting technique that identifies unusual patterns in gas flow – have detected disturbances in the disk of gas and dust around the very young star HD 163296. They say these disturbances represent strong evidence for 3 planets forming within the disk.

Kinematic evidence for an embedded protoplanet in a circumstellar disc, by C. Pinte et al., 2018, to appear in Astrophysical Journal Letters.