ISS managers are being forced to adjust the space station’s flight manifest following the August 24, 2011 crash of a Russian cargo ship in Siberia.

As a result of the August 24, 2011 crash of a Russian Progress cargo spacecraft in Siberia, the International Space Station (ISS) might be de-manned in mid-November, according to a NASA spokesperson speaking on Monday, August 29. Though the current on-board crew remains safe for now, crew rotation issues and difficulties landing the manned Soyuz craft in the middle of winter might require temporarily abandoning the ISS. The station can theoretically be operated from Earth indefinitely.

Boriensko, Samokutyaev, and Garan were due to return September 8, while the rest of the crew would remain until at least November 16.

The International Space Station on May 30, 2011 as seen from the departing space shuttle Endeavour during STS-134. (Wikimedia Commons)

The immediate issue facing the ISS is not related to supplies, since, according to NASA, the recent STS-135 mission delivered enough for the ISS to remain crewed at six crew members and still reach next summer without any resupplies.

Rather, the immediate issue facing the ISS relates to crews, since neither NASA nor the Russian space agency will allow the astronauts aboard the space station to remain beyond a mandated six-month limit because of the risk posed by exposure to radiation. Ensuring that ISS remains crewed until the next Soyuz spacecraft can launch replacement crew members will be a challenge, and is dependent upon how quickly the Russians can return the Soyuz rocket to flight status. 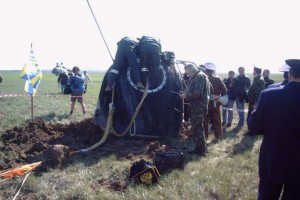 A May 2002 shot of a post-landing scene in Kazakhstan. Image Credit: NASA/Marty Linde

The timing of a Soyuz spacecraft’s return to its Kazhakstan landing site – carrying returning ISS crew members aboard – must occur an hour before or after sunrise, or an hour before sunset, in order to provide rescue crews with safe conditions for reaching the returning crew. The times that the Soyuz spacecraft can land in Kazakhstan are dictated by orbital mechanics. As winter approaches in the difficult Russian terrain, the required time frame becomes even more difficult due to shorter daylight hours and more hazardous weather conditions. In a worst-case scenario, if anything goes wrong in the Soyuz landing, the search-and-rescue teams would be forced to search for the landed astronauts in a blizzard wrapped in total darkness.

During the Kazakhstan winter months (December to February), the weather is too bad to permit Soyuz landings, since strong winds and heavy snows increase the risks to both Soyuz landings and the search-and-rescue teams.

… not going to happen. We are considering a couple of options. One is to keep the crew until about mid-September, perhaps another week or so, and this gets us all the way up to the point where we [begin to] lose light at the landing site … 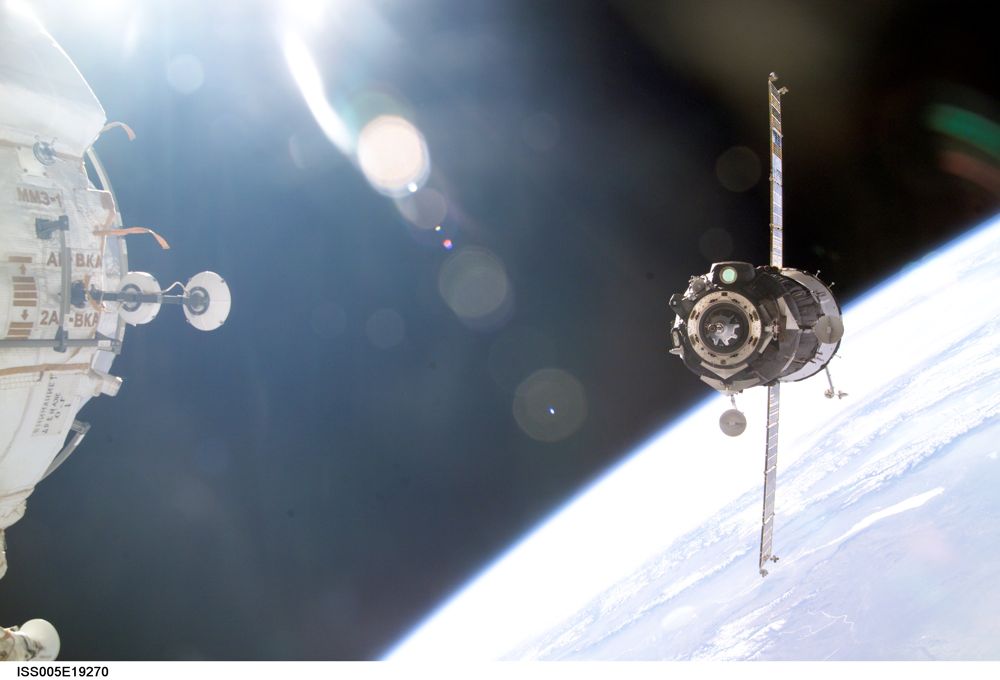 A 2002 approach of a Soyuz spacecraft to the International Space Station. Image Credit: NASA

The three remaining crew members will stay on until at least November 16. In December, landing at the Kazhakstan site becomes extremely risky. Suffredini said:

Don’t get hung up on the dates. The important part is we’ll have a couple of unmanned flights before we put humans aboard the Soyuz. I want to emphasize to everyone that the crew on board is safe. We have plans to operate either three crew or no crew, the impact of course is the amount of research we’ll get done …. meanwhile we’ll give our Russian colleagues the chance to thoroughly sort through the anomaly, determine the root causes, determine recovery plans, and once they finalize those plans then we will together finalize a plan for the crew and as I said we have plenty of options. We will focus on crew safety as we always do. If we don’t have Soyuz flying by the middle of November, then we would have to de-man the ISS at that point.

Since the termination of the U.S. space shuttle program in July 2011, the Russian Soyuz rockets remain the only method for launching American astronauts into space and returning them to Earth.

Yet to be decided is the fate of the mission to bring three new crew members to ISS in October.

Bottom line: As a result of the August 24, 2011 crash of a Russian Progress cargo rocket over Siberia, International Space Station (ISS) managers are adjusting the flight manifest for the orbiting space station, which might be de-manned by mid-November, according to NASA. The current on-board crew remains safe – and has supplies – at this time.

Bonnie Dunbar on the end of the Space Shuttle era