The sun was very active on Friday! It released two X-flares, the most powerful kind of solar flares, causing two temporary radio blackouts.

The sun was active on Friday! NASA’s Solar Dynamics Observatory recorded a powerful an X1 flare on the sun early on Friday, and then again about 7 hours later. X-flares are the most powerful solar flares. The first flare peaked on October 25, 2013 at 0801 UTC (3:01 a.m. CDT in the U.S.). The second X-class solar flare, an X2, peaked at 1503 UTC (10:03 a.m. CDT). And this might not be the end of the flare activity. We’ll keep you updated, and you might also check with NASA’s SDO page about these events.

Meanwhile, the NOAA’s Space Weather Prediction Center recorded two strong (but temporary) radio blackouts Friday. Both were categorized as R3 blackouts, which are typically associated with X-flares from the sun.

There was no indication of a coronal mass ejection (CME) from either solar flare. A CME aimed in Earth’s direction can cause geomagnetic storms, creating beautiful displays of northern lights, aka the aurora borealis. A CME in this case, however, would be unlikely to cause geomagnetic storm activity because the X-flares were located to one side of the sun, and the CME would not be launched in our direction.

The video below shows the first X-flare, which occurred early in the morning on October 25, according to clocks in the U.S.

There may be more to this flare than meets the eye … The X1-flare was bracketed by two erupting magnetic filaments, each located hundreds of thousands of kilometers from AR1882. In other words, the X1 flare might have been just one piece of an interconnected global eruption. 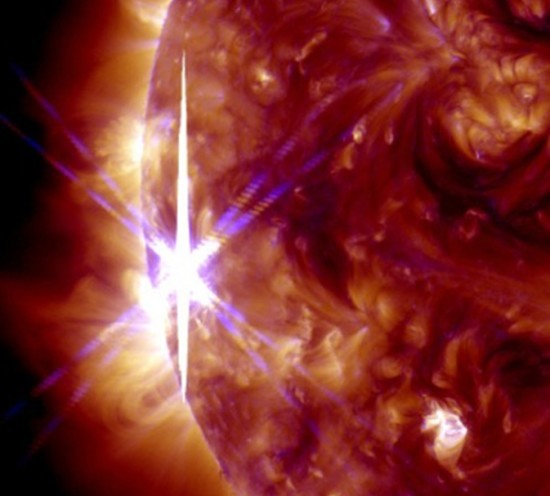 This is the second X-flare on October 25. Don’t worry about its appearing on the opposite side of the sun. It’s from the same sunspot group; the images are just rotated. Image via NASA SDO.