After releasing a barrage of M-class flares over the past few days, sunspot 1515 released an X-flare on July 6. Its effects might deliver a glancing blow to Earth on July 8 or 9.

We’ve seen many photos on EarthSky’s Facebook page this week of giant sunspot region 1515, which has released a barrage of M-class flares over the past few days. Late in the day on July 6, this sunspot region released a strong X1.1-class solar flare. The X-flare came at 2308 UTC (6:08 p.m. CDT).

Spaceweather.com reports that the explosion hurled a CME, or coronal mass ejection, into space. These events can cause damage to satellites in Earth orbit, and they can affect telecommunications on Earth. CMEs are not harmful to humans on Earth’s surface.

The movie below is from the Solar and Heliospheric Observatory. It shows the cloud of charged solar particles released in the July 6, 2012 X-flare to be heading south and away from Earth. There is the possibility of a glancing blow to our planet on July 8 or 9. Again, these events cannot harm us on Earth’s surface. Our atmosphere protects us. There is a chance for a beautiful display of the northern lights. Aurora alert!

The Solar and Heliospheric Observatory released this movie of the CME associated with the July 6, 2012 X-flare. It shows the cloud of charged solar particles to be heading south and away from Earth. There is the possibility of a glancing blow to our planet on July 8 or 9. Humans on Earth’s surface are protected from these events by our planet’s atmosphere.

The image below was posted by our friend Jv Noriega, who photographed AR1515 at sunset in Manila just hours before the X-flare.

The image below is from NASA’s Solar Dynamics Observatory, which orbits in a circular, geosynchronous orbit – that is, staying at one spot over Earth’s surface – at an altitude of 36,000 kilometers (22,000 miles). 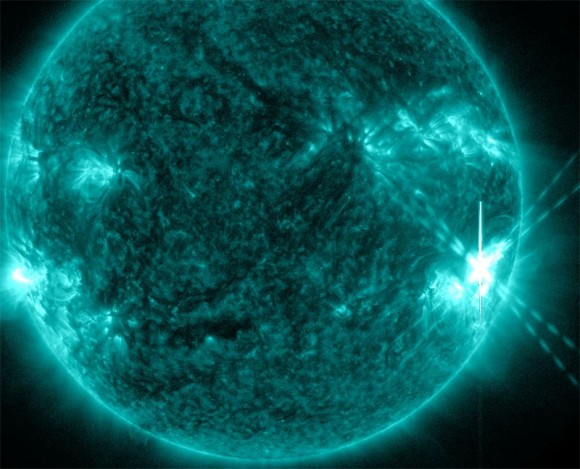 Here is the sun with active region 1515 as seen from space by NASA’s Solar Dynamics Observatory (SDO).

Bottom line: AR1515 released a strong X1.1-class solar flare at 2308 UTC on July 6, 2012. Its effects might deliver a glancing blow to Earth on July 8 or 9. Around those nights, look for beautiful displays of the aurora, or northern lights.