ESA hopes communications with the Philae comet lander can be regained by May or June. Wait you’re waiting, check out these stunning newly released images!

View larger. | Philae comet lander’s descent to the surface of Comet 67P/Churyumov–Gerasimenko, as seen by the Rosetta spacecraft. The timestamp marked on the images are in GMT (onboard spacecraft time). Image via ESA/Rosetta/MPS for OSIRIS Team MPS/UPD/LAM/IAA/SSO/INTA/UPM/DASP/IDA

NASA released the animated gif above on January 30, 2015. It’s a series of 19 images captured by Rosetta’s OSIRIS camera as the Philae lander descended to the surface of Comet 67P/Churyumov–Gerasimenko on November 12, 2014. That was the day the Philae lander made history, becoming the first space probe to attempt a soft-landing on a comet. In the weak gravity of the 4-km-wide (2.5-mile-wide) comet, the spacecraft bounced several times from its initial touchdown point, became lost and then went silent when its battery ran out. On January 30, ESA said it would call off further searches for the lander for the time being and wait for the lander to “call home.”

ESA had said in November it was likely the lander had finally touched down in the shadow of a cliff or other obstruction, somewhere it could not receive enough sunlight to re-power its battery. And yet all hope for the lander was not and is not lost. As the comet continues orbiting the sun, its seasons are subtly changing (much as Earth’s are), meaning the sun is continually shifting in the comet’s sky, eventually, hopefully, bringing more sunlight to the lander’s location.

ESA said it will begin listening in a few more weeks with the hope that communications with the lander can be re-established by May or June.

But wait! Before you go, check out the image below … 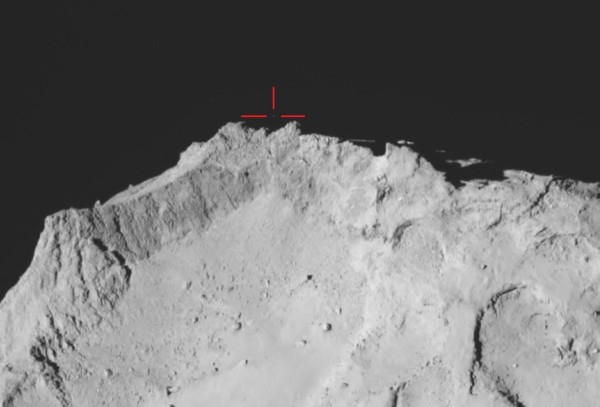 View larger. | The Philae Lander against black space just off the comet’s surface during the first bounce off Comet 67P/Churyumov–Gerasimenko. Image via ESA ESA/Rosetta/MPS for OSIRIS Team MPS/UPD/LAM/IAA/SSO/INTA/UPM/DASP/IDA.

The image above is an absolutely awesome shot of the Philae lander, making its descent to Comet 67P/Churyumov–Gerasimenko above the Hatmehit crater on November 12, 2014.

Here the Philae Lander is seen against black space just off the comet’s surface (within the red crosshairs) during the first bounce after failing to land properly on the comet.

Philae Lander did eventually land in a still-unknown location on the comet.

Seasons are changing on Rosetta’s comet 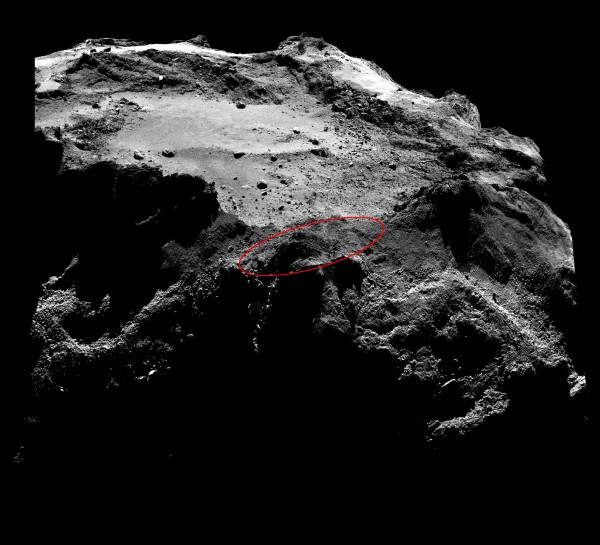 Hatmehit crater on Comet 67P/Churyumov-Gerasimenko. The area in red marks the search area for the Philae lander. Image via ESA ESA/Rosetta/MPS for OSIRIS Team MPS/UPD/LAM/IAA/SSO/INTA/UPM/DASP/IDA.

Here’s another awesome image of the Hatmehit crater on the top of 67P’s head from the OSIRIS (Optical, Spectroscopic and Infrared Remote Imaging System) Narrow Angle Camera. The image is from December 13, 2014.

Here the Hatmehit crater is very well seen from an oblique angle with the red oval outlined area showing the search area of the washing-machine-sized Philae lander.

What are you actually seeing here? It’s a comet, moving in orbit around the sun. The nucleus of 67P/Churyumov–Gerasimenko is smaller than many mountains, is also much smaller than both of the Mars moons, Phobos and Deimos.

Many features look like ablation features, even though Comet 67P/Churyumov-Gerasimenko has only been in an orbit to allow sublimation only very recently, so could be impact features that have frozen.

Cliffs and boulders are also visible.

Bottom line: The wonderful Philae comet lander! It lies silent, presumably in darkness, on the surface of Comet 67P/Churyumov-Gerasimenko. NASA hopes communications with the lander can be regained by May or June. While you’re waiting, check out these stunning newly released images!