The last of Hubble’s Frontier Fields 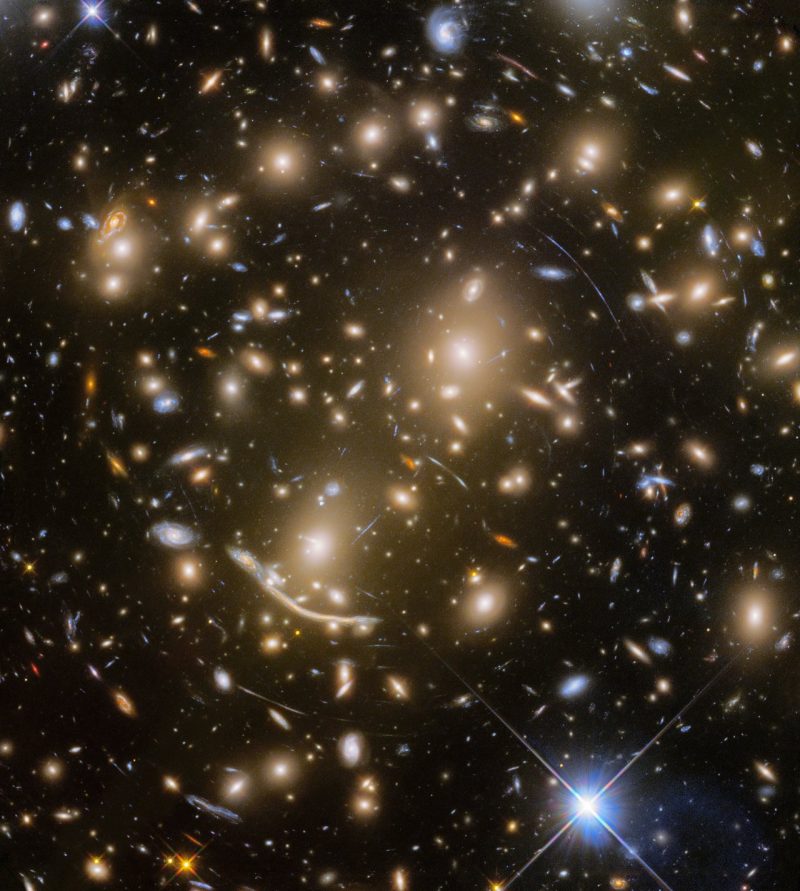 With the final observation of the distant galaxy cluster Abell 370 — some 5 billion light-years away — the Hubble Space Telescope’s Frontier Fields program came to an end. The arcs and streaks in the picture are the stretched images of background galaxies, caused by gravitational lensing by Abell 370. Image via NASA/ ESA/ Hubble/ HST Frontier Fields.

The Hubble Space Telescope’s Frontier Fields program has ended, NASA said on May 4, 2017 as it released the image above. This program was born in early 2012, over lunch meetings the Space Telescope Science Institute (STScI) in Baltimore. Ken Sembach, now STScI’s director, said at the time that the program grew from an earlier probe of the universe by Hubble – the Hubble Ultra Deep Field – which had looked back approximately 13 billion years, between 400 and 800 million years after the Big Bang. Sembach said:

We are often asked by the public whether what is seen in the [Hubble Ultra Deep Field] is typical of the rest of the universe. And quite frankly, we don’t know without further deep observations of this type.

Thus Frontier Fields was born, aimed to advance knowledge of the early universe by studying high-redshift galaxies with the help of gravitational lensing. That is, the immense gravity of massive clusters of galaxies is known to warp the light from even-more-distant galaxies beyond. The intervening clusters distort and magnify the light of the more distant galaxies — too faint to be seen by Hubble directly — so that they become visible. NASA said:

Frontier Fields combines the power of Hubble with the power of these ‘natural telescopes’ to reveal galaxies 10 to 100 times fainter than any previously observed.

This last Frontier Fields image – shown at the top of this post – features a particularly historic and beautiful cluster of hundreds of galaxies, Abell 370. It’s located an estimated four to six billion light-years away, in the direction of our constellation Cetus the Whale. In the 1980s, Abell 370 became one of the first galaxy clusters in which astronomers observed the gravitational lensing phenomenon. NASA said:

Already in the mid-1980s higher-resolution images of the cluster showed that the giant luminous arc in the lower left of the image was not a curious structure within the cluster, but rather an astrophysical phenomenon: the gravitationally lensed image of a galaxy twice as far away as the cluster itself. Hubble helped show that this arc is composed of two distorted images of an ordinary spiral galaxy that just happens to lie behind the cluster …

This image of Abell 370 was captured as part of the Frontier Fields program, which used a whopping 630 hours of Hubble observing time, over 560 orbits of the Earth. Six clusters of galaxies were imaged in exquisite detail, including Abell 370 which was the very last one to be finished.

NASA said that – now that the observations for the Frontier Fields program are complete – astronomers will begin using the full dataset to explore these distant clusters, their gravitational lensing effects and the magnified galaxies behind them. Thus they’ll continue probing the early universe, even as they’re preparing to begin using Hubble’s replacement, the James Webb Space Telescope, scheduled for launch in 2018.

Bottom line: With the final observation of the distant galaxy cluster Abell 370 — some five billion light-years away — the Frontier Fields program came to an end.