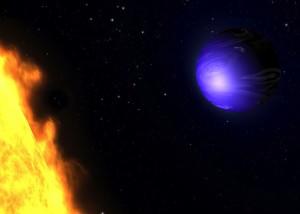 Its cobalt blue color is thought to be caused by fierce, hot winds that send “raindrops” of glass howling sideways across this world’s surface. Image via NASA, ESA, and G. Bacon (STScI).

Thank you! Your submission has been received!
Oops! Something went wrong while submitting the form.
END_OF_DOCUMENT_TOKEN_TO_BE_REPLACED