A true-blue world, 63 light-years away

Earth appears blue from space because it has oceans. Planet HD 189733b appears blue because of molten glass “raindrops” blowing sideways across its surface.

The Hubble Space Telescope has identified the true visible-light color of a giant Jupiter-sized planet located 63 light-years away and found it to be cobalt blue. Unlike our blue planet Earth, whose color comes from our world’s oceans, the blue color of planet HD 189733b doesn’t come from water. Instead, the cobalt blue color is believed to come from torrential 4,500-mile-per-hour winds blowing across the surface of this world, which are so hot that they melt silicates into raindrops of sideways-blowing molten glass. 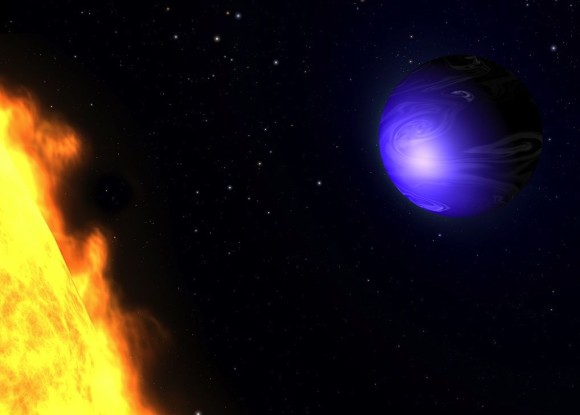 Artist’s concept of planet HD 189733. Its cobalt blue color is thought to be caused by fierce, hot winds that send “raindrops” of glass howling sideways across this world’s surface. Image via NASA, ESA, and G. Bacon (STScI).

The planet orbits the yellow-orange star HD 189733. It’s one of the closest exoplanets – or planets orbiting distant suns – that can be seen crossing the face of its star.

Winds blowing across the surface of this world are thought to be so hot they melt silicates into raindrops of molten glass, which blow sideways across this world’s surface. The cobalt-blue color of the planet seen from afar comes from these melted glass raindrops, which scatter blue light more readily than green or red light.

The planet’s color provides unique clues to the atmosphere and weather on a truly alien world that orbits much closer to its star than the innermost planet Mercury is to our sun.

Read more about HD 189733b from the HubbleSite News Center

Bottom line: Earth appears blue from space because it has oceans. Planet HD 189733b appears blue because of molten glass “raindrops” blowing sideways across its surface!