A supernova in M95

Currently supernova SN 2012aw is shining with the light of 500 million suns and will most likely get much brighter.

Only a moon’s width south of the planet Mars in the constellation Leo, a star that exploded in a nearby galaxy has just come into our view. Professional and amateur astronomers spotted it on March 16, 2012, on the outskirts of a spiral galaxy named M95, situated along our line of sight to the constellation Leo the Lion, where Mars also happens to be now.

The supernova in M95 is now officially designated SN 2012aw. It appeared to us this month, but actually exploded about 38 million years ago. It has taken that much time for the light from the explosion to cross through extragalactic space to reach telescopes here on Earth.

Located 38 million light-years away, the newly detected supernova offers astronomers a rare up-close opportunity to study the evolution of a massive dying star. Though 38 million light-years sounds incredibly far away, it’s actually pretty close as galaxies go. Most supernovae are detected in galaxies far across the universe. This supernova is still very far away, and of course not a danger to Earth in any way. Yet, on a cosmic scale, this explosion is almost in our backyard. 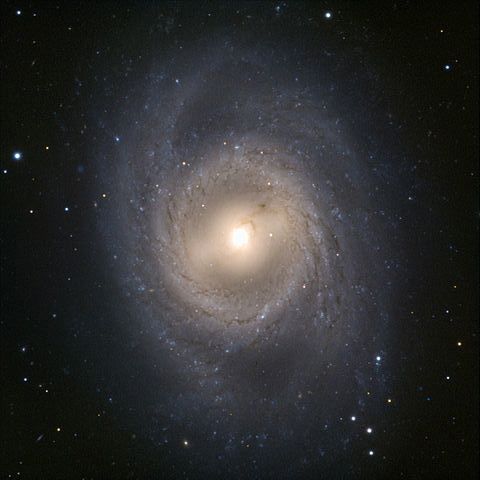 Here is the galaxy M95 – taken at the Very Large Telescope (VLT) – before the supernova. Image Credit: ESO via Wikipedia 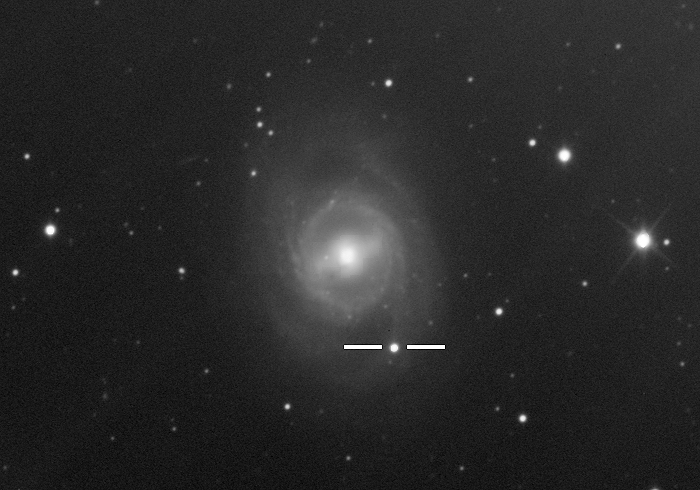 Here is the galaxy M95 again, with the supernova now visible. This image was taken on March 20, 2012. The supernova is marked with the white bars. Image Credit: Anthony Ayiomamitis

Because it is so close, M95 is a favorite target for amateur and professional astronomers alike. This is fortuitous for researchers because it gives them access to a rich set of images leading up to and during the initial outburst. Usually supernovae are noticed only after they’ve reached their peak brightness. But SN 2012aw is continuing to get brighter every night. Astronomers therefore hope that it can teach them about the earliest moments of a massive star’s death throes. That, in turn, may provide some insight into how these stars operate beneath their luminous outer layers.

Currently SN 2012aw is shining with the light of 500 million suns and will most likely get much brighter before slowly fading away over the coming months.

Astronomers have been able to clock the ejecta at a speed of 15,000 km/s – over 33 million mph! At that speed, the exploding gas would cover the distance between the sun and our planet in only three hours.

What is a supernova? A star spends most of its time in a precarious balance: the energy produced from thermonuclear fusion in its core constantly pushes outward against the star’s relentless gravitational pull. When the star runs out of fuel, gravity wins. Without gas pressure provided by fusion, the massive bulk of the star comes crashing down on the stellar core. The inrushing gas ignites one last round of runaway nuclear fusion, and the star, now wildly out of balance, literally blows itself apart. The resulting explosion is called a Type II supernova.

Difference between Type I and Type II supernovae 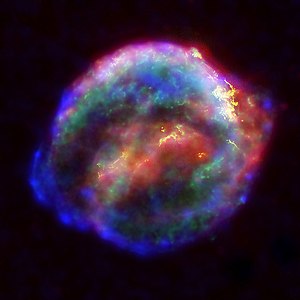 Supernovae happen with only the most massive of stars – at least eight times heavier than our sun. These stellar behemoths shine bright and die young. The intense pressure from all that weight bearing down on the core of the star forces these heavyweights to exhaust their fuel supply in only a few million years. To put that into perspective, our sun is middle-aged at five billion years old. Since a few million years isn’t enough time for a star to wander far from its birthplace, Type II supernovae typically only explode in regions where stars are forming. 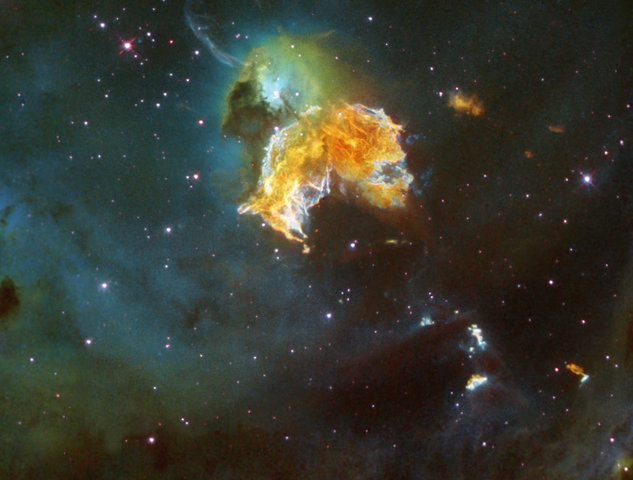 A supernova remnant 160,000 light-years away in the Large Magellenic Cloud, a satellite galaxy of the Milky Way. Credit: NASA, ESA, HEIC, and The Hubble Heritage Team (STScI/AURA) via Wikipedia

Like others before it, SN 2012aw is now seeding the space around it with heavy elements that can only be forged in the fires of a supernova. All the gold in all the wedding rings in the world came from a stellar explosion that triggered the formation of our solar system over five billion years ago. It’s possible that in the coming millenia, the shockwave from SN 2012aw will trigger the collapse of a nearby cloud of interstellar gas and dust, leading to the formation of new stars and planets. Out of the death of one massive star may come the birth of the next stellar generation.

Bottom line: A supernova has been detected in the nearby spiral galaxy M95, providing astronomers a rare opportunity to study the death of a massive star. Astronomers first spotted the supernova on March 16, 2012, and it is still getting brighter. Its official designation is now SN 2012aw. Astronomers around the world are watching it!