A spiral within a spiral galaxy

ESO 498-G5’s spiral arms wind all the way into the galaxy’s center. ESO 498-G5’s core looks like a miniature spiral galaxy at the heart of the larger spiral.

Orbiting about 360 miles (550 kilometers) above Earth, the Hubble Space Telescope captured this image of a spiral galaxy, called ESO 498-G5, with a fascinating spiral structure at its heart. 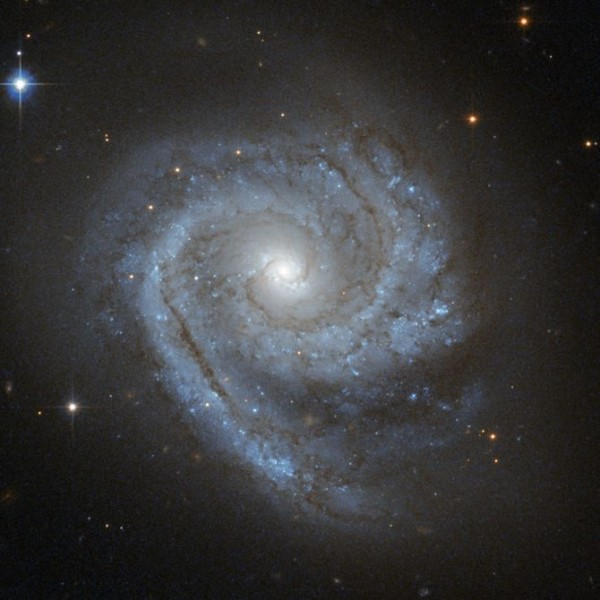 The NASA/ESA Hubble Space Telescope captured this image of the spiral galaxy known as ESO 498-G5. One interesting feature of this galaxy is that its spiral arms wind all the way into the centre, so that ESO 498-G5’s core looks a bit like a miniature spiral galaxy. Image Credit: ESA/Hubble & NASA

ESO 498-G5 is located 100 million light years away in the direction of a small, inconspicuous constellation in the southern hemisphere, Pyxis. Look closely at the center of the galaxy. See the spiral? What’s happening here is that ESO 498-G5’s spiral arms wind all the way into the galaxy’s center. That fact makes ESO 498-G5’s core look like a miniature spiral galaxy at the heart of the larger spiral.

Astronomers refer to the distinctive spiral-like bulge of galaxies such as ESO 498-G5 as disc-type bulges, or pseudobulges. Meanwhile, bright elliptical centers of spiral galaxies are called classical bulges.

Bottom line: The spiral galaxy ESO 498-G5 has a smaller spiral structure at its heart. This type of structure in a spiral galaxy is called a pseudobulge. Bright elliptical centers of spiral galaxies are called classical bulges. The Hubble Space Telescope took this photo.

Read more about this galaxy from NASA

Will a nearby supernova harm life on Earth in 2012? Nah.