Astronomers found a ring system in a distant solar system when the rings blocked the light of that distant sun, and caused a temporary dimming of its light.

With its wide, encircling system of rings, Saturn is the most glorious planet in our solar system to view through a telescope. But over the past decades, astronomers have learned that the four gas giant planets in our solar system – Jupiter, Saturn, Uranus and Neptune – all have rings. Now astrophysicists from the University of Rochester and Europe have discovered a ring system in a distant solar system, 420 light-years away. They found it when the ring system apparently blocked the light of that distant sun, and caused a temporary dimming of its light. 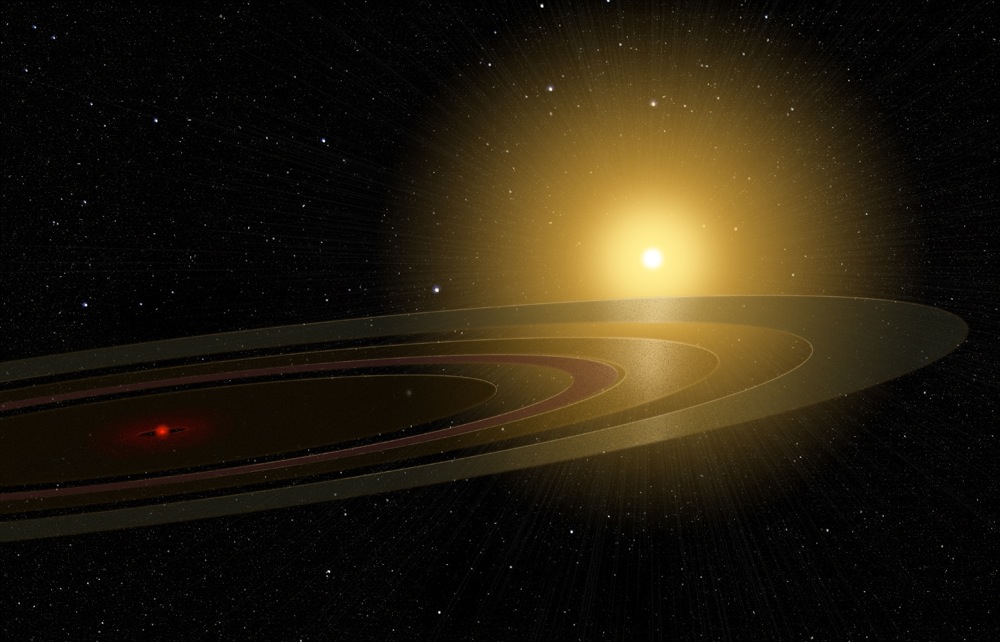 Artist’s concept of possible ring system in a distant solar system. The rings sometimes blot the light of this star as seen from Earth, temporarily dimming it. Illustration Credit: Michael Osadciw/University of Rochester

This system contains a star similar in mass to our sun, known to astronomers as 1SWASP J140747.93-394542.6. The star is younger than our sun – about 16 million years old or 1/300th the age of the solar system. It lies in the direction of the southern constellation Centaurus the Centaur, in what astronomers refer to as the Scorpius-Centaurus association — an loose grouping of stars near our sun, thought to have been born at more or less the same time, and still moving together through space. Some have speculated that our sun might be part of this association.

The scientists who studied this region of space, led by Assistant Professor of Physics and Astronomy Eric Mamajek of Rochester and the Cerro Tololo Inter-American Observatory, used data from the international SuperWASP (Wide Angle Search for Planets) and All Sky Automated Survey (ASAS) project to study the light curves – or waxing and waning of light, over time – of young sun-like stars belonging to the Scorpius-Centaurus association.

One star in particular appeared to undergo an eclipse during a 54-day period in 2007. University of Rochester graduate student Mark Pecaut and Mamajek discovered the eclipse in the data several years later, in 2010. Mamajek said:

When I first saw the light curve [plot of the star’s light, over time], I knew we had found a very weird and unique object. After we ruled out the eclipse being due to a spherical star or a circumstellar disk passing in front of the star, I realized that the only plausible explanation was some sort of dust ring system orbiting a smaller companion—basically a ‘Saturn on steroids.

He said that if a spherical body – like a planet or moon – had passed in front of the star, the intensity of the light would have gradually dimmed and reached a low point before gradually increasing. That was not the case with this star. The Rochester team discovered a long, deep, and complex eclipse event with significant on-and-off dimming. At the deepest parts of the eclipse, at least 95% of the light from the star was being blocked by dust. Mamajek said:

We suspect this new star is being eclipsed by a low-mass object with an orbiting disk that has multiple thin rings of dust debris.

Bottom line: Astronomers from the University of Rochester and Europe have discovered a ring system in a distant solar system, 420 light-years away. They found it when the ring system apparently blocked the light of that distant sun, and caused a temporary dimming of its light.

Read more about this story

Give me five minutes, I’ll give you Saturn in 2012