As the first human ancestors walked the Earth, our galaxy’s central black hole might have been in the process of blasting away most of the galaxy’s normal matter. 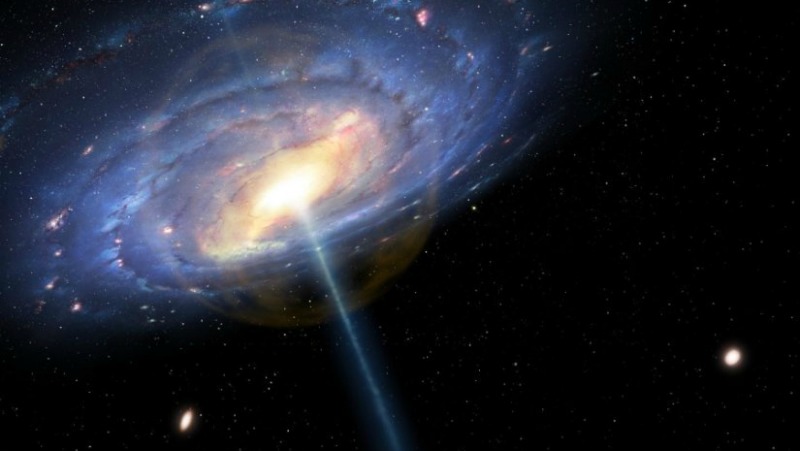 Artist’s concept of Milky Way as it might have appeared 6 million years ago during a ‘quasar’ phase of activity. Image via Mark A. Garlick/CfA.

In recent decades, astronomers have learned that the center of our home galaxy, the Milky Way, contains a four-million-solar-mass black hole. For the most part, this supermassive black hole is inactive, although it’s known to swallow sips of hydrogen gas occasionally. But, if astronomers at the Harvard-Smithsonian Center for Astrophysics (CfA) are correct, the Milky Way recently (by cosmic standards) went through a quasar stage in its evolution. The astronomers say it happened when the Milky Way’s central black hole swallowed a huge amount of gas, creating a shock wave that has now crossed 20,000 light-years of space. They say that event left behind a million-degree gaseous fog, a sort of “bubble” that extends from the Milky Way’s core two-thirds of the way to Earth. It’s this “bubble” that the astronomers say they’ve now observed, via data from an X-ray spacecraft. Thus, according to their August 29, 2016 statement, six million years ago:

… when the first human ancestors known as hominins walked the Earth, our galaxy’s core blazed forth furiously.

The CfA study – which has been accepted for publication by the Astrophysical Journal – was led by Fabrizio Nicastro, who holds joint appointments at CfA and the Italian National Institute of Astrophysics. The study is based on a search for the galaxy’s missing mass. Nicastro explained:

We played a cosmic game of hide-and-seek. And we asked ourselves, where could the missing mass be hiding?

The CfA statement explained the missing mass as follows:

Measurements show that the Milky Way galaxy weighs about 1-2 trillion times as much as our sun. About five-sixths of that is in the form of invisible and mysterious dark matter. The remaining one-sixth of our galaxy’s heft, or 150-300 billion solar masses, is normal matter. However, if you count up all the stars, gas and dust we can see, you only find about 65 billion solar masses. The rest of the normal matter – stuff made of neutrons, protons, and electrons – seems to be missing.

Nicastro and his group analyzed archival X-ray observations – older data that had been stored – from ESA’s XMM-Newton spacecraft in their search for the Milky Way’s missing mass. Their statement said they found:

The astronomers used the amount of absorption to calculate how much normal matter was there, and how it was distributed. They applied computer models but learned that they couldn’t match the observations with a smooth, uniform distribution of gas. Instead, they found that there is a “bubble” in the center of our galaxy that extends two-thirds of the way to Earth. Their statement explained:

Clearing out that bubble required a tremendous amount of energy. That energy … came from the feeding black hole. While some infalling gas was swallowed by the black hole, other gas was pumped out at speeds of 2 million miles per hour (1,000 km/sec).

Six million years later, the shock wave created by that phase of activity has crossed 20,000 light-years of space. Meanwhile, the black hole has run out of nearby food and gone into hibernation.

The astronomers say this timeline is corroborated by the presence of 6-million-year-old stars near the Milky Way’s center. They said they believe those stars formed from some of the same material that once flowed toward the black hole.

They also said the observations and associated computer models show that the hot, million-degree gas can account for up to 130 billion solar masses of material. That’s a lot of mass, but the Milky Way’s missing mass is also alot. Their statement said the numbers add up and that their ideas:

… just might explain where all of the galaxy’s missing matter was hiding: it was too hot to be seen.

Their statement also spoke of a concept for a next-generation space mission known as X-ray Surveyor:

It would be able to map out the bubble by observing fainter sources, and see finer detail to tease out more information about the elusive missing mass.

Bottom line: Astronomers at the Harvard-Smithsonian Center for Astrophysics believe that our galaxy’s central black hole might have been in a quasar phase of activity six million years ago.

Via the Harvard Smithsonian Center for Astrophysics