A preliminary map of different regions on Rosetta’s comet

The comet turns out to be a unique, multifaceted world. We now know comets can have cliffs, depressions, craters, boulders or even parallel grooves. 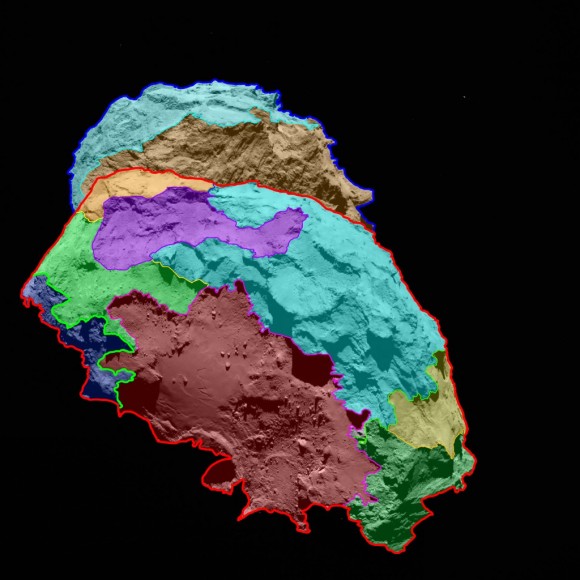 Morphologically different regions are indicated in this preliminary map of Comet 67P/Churyumov-Gerasimenko. In this image, the comet’s ‘body’ is in the foreground, and its ‘head’ is in the background. Image via ESA/Rosetta/MPS for OSIRIS Team MPS/UPD/LAM/IAA/SSO/INTA/UPM/DASP/IDA

ESA’s Rosetta spacecraft arrived at its target comet – Comet 67P/Churyumov-Gerasimenko – on August 6, 2014. Since then, the craft has been moving in tandem with the comet as this small icy body approaches its perihelion, or closest point to the sun, in 2015. On November 11, ESA will drop a lander onto the comet’s surface, and the search for the best landing site has been narrowed to five candidates. In the meantime, various science results have been coming out of the spacecraft’s instruments, including this interesting preliminary map of distinct morphological regions on Rosetta’s comet.

As indicated by this map, the Rosetta spacecraft has revealed Comet 67P/Churyumov-Gerasimenko as a unique, multifaceted world. We know this comet vastly better now than any previous comet in history. Each region on 67P’s surface – shown in different colors in the image above – is defined by special morphological characteristics. For example, the spacecraft has seen areas on the comet dominated by cliffs, depressions, craters, boulders or even parallel grooves. While some of these areas appear to be quiet, others seem to be shaped by the comet’s activity, which will increase as it nears the sun.

This weekend – September 13 and 14, 2014 – maps of 67P’s surface will offer valuable insights as Rosetta’s Lander Team and the Rosetta orbiter scientists gather in Toulouse to determine a final primary and backup landing site from the earlier preselection of five candidates.

OSIRIS, Rosetta’s scientific imaging system, captured the data that let scientists define the various regions on the comet’s surface. Holger Sierks of the Max Planck Institute for Solar System Research in Germany is the OSIRIS camera’s Principal Investigator. He commented:

Never before have we seen a cometary surface in such detail. It is a historic moment, we have an unprecedented resolution to map a comet.

This first map is, of course, only the beginning of our work. At this point, nobody truly understands how the morphological variations we are currently witnessing came to be.

In the coming months, the OSIRIS team will monitor the comet’s surface, looking for the inevitable changes that will come as both 67P and the Rosetta spacecraft travel closer to the sun. 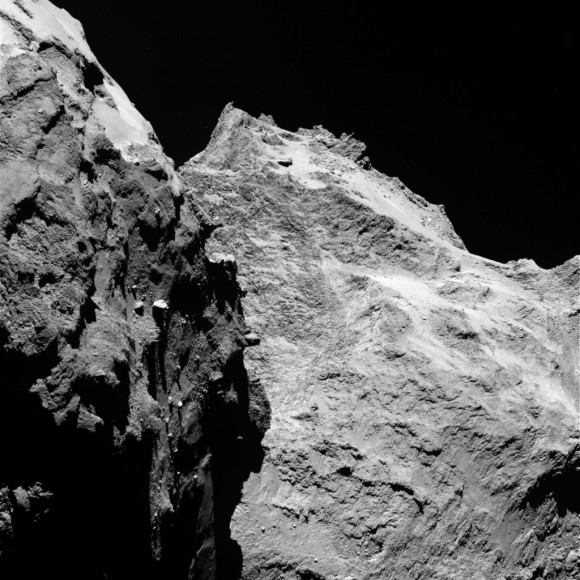 Jagged cliffs and prominent boulders are visible in this image taken by Rosetta’s OSIRIS imaging system on September 5, 2014 from a distance of 62 kilometers from comet 67P/Churyumov-Gerasimenko. The left part of the image shows a side view of the comet’s ‘body,’ while the right is the back of its ‘head’. One pixel corresponds to 1.1 meters. Image via ESA/Rosetta/MPS for OSIRIS Team MPS/UPD/LAM/IAA/SSO/INTA/UPM/DASP/IDA

Bottom line: A preliminary map of morphologically different regions on the surface of Comet 67P/Churyumov-Gerasimenko – as revealed by the Rosetta spacecraft – shows the comet to be a unique, multifaceted world. We now know that comets can have cliffs, depressions, craters, boulders or even parallel grooves.