A new way to search for exomoons 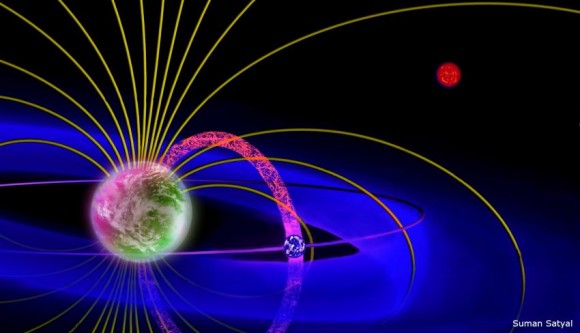 Schematic of a plasma torus around an exoplanet, which is created by the ions injected from an exomoon’s ionosphere into the planet’s magnetosphere. Image by Suman Satyal via UT Arlington

In recent years, astronomers have found more than 1,800 exoplanets, worlds located far beyond our local solar system. But, so far, no one has confirmed an exomoon. Physicists from University of Texas at Arlington say it might be possible to follow a trail of radio wave emissions to discover the first exomoons orbiting distant planets. Their work is published in the August 10, 2014 issue of The Astrophysical Journal.

These physicists propose to look for radio wave emissions, like those resulting from the interaction between the magnetic field of Jupiter – our solar system’s largest planet – and its little moon Io. This moon has an ionosphere – a charged upper atmosphere – likely created by Io’s extremely active volcanoes. As Io orbits around Jupiter, its ionosphere interacts with Jupiter’s magnetosphere – a layer of charged plasma that protects the planet from radiation – to create a frictional current that causes radio wave emissions.

The physicists suggest using detailed calculations about the Jupiter/Io dynamic to look for radio emissions that could indicate moons orbiting an exoplanet.

Joaquin Noyola, a Ph.D. graduate student at UT Arlington is lead author on the new paper. He said it’s important to note that – when modeling distant planet/moon pairs – exomoons would not necessarily have to have Io’s volcanic activity to have an ionosphere. He said:

Larger moons – such as Saturn’s largest moon, Titan – can sustain a thick atmosphere, and that could also mean they have an ionosphere. So volcanic activity isn’t a requirement.