A giant magnetic bridge between galaxies

Known as the Magellanic Bridge, it’s a huge stream of neutral gas stretching 75,000 light-years between the 2 Magellanic Clouds, which orbit our Milky Way. 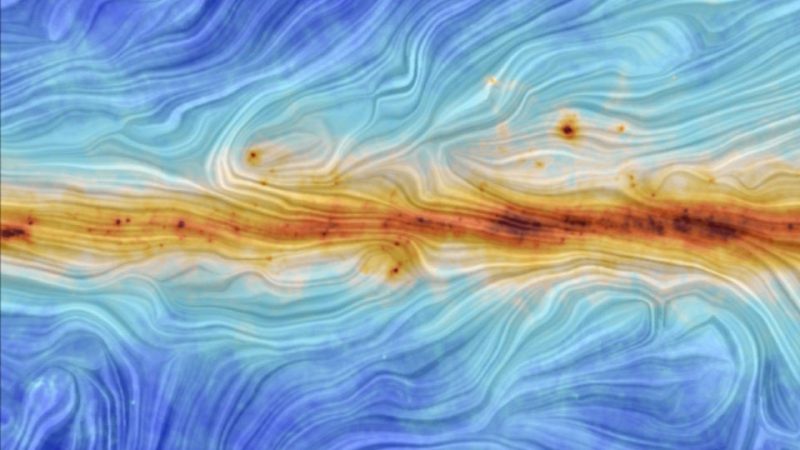 This story was released earlier this month, but it wasn’t until today (May 18, 2017) that it made a splash on social media. I suspect that’s because some smart media person thought to include the image above (which doesn’t show the magnetic bridge itself, but instead is a map of our Milky Way galaxy’s magnetic field). Still, it’s a very cool story, a magnetic bridge between galaxies, in this case the Large and Small Magellanic Clouds, which are satellite galaxies to our home galaxy, the Milky Way. Scientists haven’t seen a magnetic bridge between galaxies before, and they’re calling this one the Magellanic Bridge.

This vast bridge is a filament of gas stretching 75 thousand light-years in length. Jane Kaczmarek is a PhD student in the School of Physics at the University of Sydney, and she’s lead author of the paper describing the finding in the peer-reviewed journal Monthly Notices of the Royal Astronomical Society. She said:

There were hints that this magnetic field might exist, but no one had observed it until now.

Now … let’s talk about what she means by “observed.” Specifically, why isn’t anyone publishing a picture of the bridge itself? 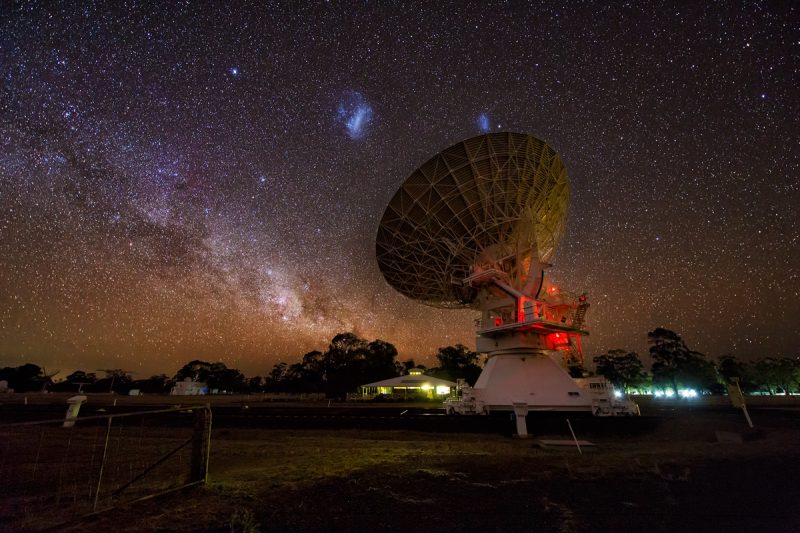 Here’s the Australia Telescope Compact Array with the Large and Small Magellanic Clouds in the background. The telescope is located at the Paul Wild Observatory in New South Wales, Australia. Image by Mike Salway via University of Toronto.

The trick is that cosmic magnetic fields can be detected only indirectly. In this case, the Australia Telescope Compact Array radio telescope observed radio signals from hundreds of very distant galaxies lying in the space beyond the Large and Small Magellanic Clouds. Kaczmarek said:

The radio emission from the distant galaxies served as background ‘flashlights’ that shine through the Bridge. Its magnetic field then changes the polarization of the radio signal. How the polarized light is changed tells us about the intervening magnetic field.

The original statement about this discovery, which was from University of Toronto, explained more about what that means:

A radio signal, like a light wave, oscillates or vibrates in a single direction or plane; for example, waves on the surface of a pond move up and down. When a radio signal passes through a magnetic field, the plane is rotated. This phenomenon is known as Faraday Rotation and it allows astronomers to measure the strength and the polarity — or direction — of the field.

The observation of the magnetic field, which is one millionth the strength of the Earth’s, may provide insight into whether it was generated from within the Bridge after the structure formed, or was ‘ripped’ from the dwarf galaxies when they interacted and formed the structure.

Kaczmarek went on to explain that, when speaking of magnetic bridges between galaxies, we are truly on the frontier of what’s known about outer space. She said:

Bryan Gaensler, director of the Dunlap Institute for Astronomy & Astrophysics at University of Toronto and a co-author on the paper, commented:

Not only are entire galaxies magnetic, but the faint delicate threads joining galaxies are magnetic, too.

Everywhere we look in the sky, we find magnetism.

Bottom line: Scientists have found a magnetic bridge between the Large and Small Magellanic Clouds. They’re calling it the Magellanic Bridge.