A balancing rock on Rosetta’s comet?

In close-up images via the orbiting Rosetta spacecraft, the rock looks poised like a ballerina, with only a tiny fraction of its surface touching the ground. 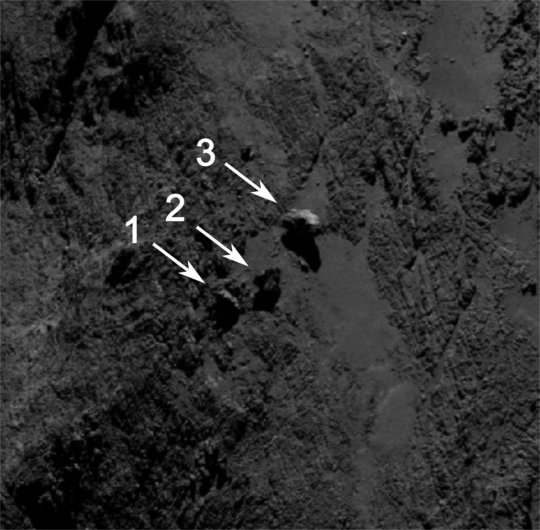 Rosetta’s OSIRIS imaging system captured these boulders on Rosetta’s comet on September 1, 2014, from a distance of 18 miles (29 km.). Rock #3 appears to be balancing. Image via ESA/Rosetta/MPS for OSIRIS Team MPS/UPD/LAM/IAA/SSO/INTA/UPM/DASP/IDA.

Scientists from the Rosetta spacecraft’s OSIRIS team – that is, its scientific imaging team – said this week (May 18, 2015) that they’ve discovered what appears to be a balancing rock on the larger lobe of Comet 67P/Churyumov-Gerasimenko. The spacecraft has been orbiting this comet since August, 2014, and will stick with it at least until the comet’s perihelion, or closest point to the sun, in August, 2015.

The close-range images from Rosetta show a group of three boulders on the comet’s surface. The largest one, with a diameter of approximately 30 meters (100 feet) appears perched on the rim of a small depression. Like balancing rocks found on Earth, this rock on Rosetta’s comet seems to have only a very small contact area with the ground.

See it! Best photos from last night of moon, Venus and Jupiter 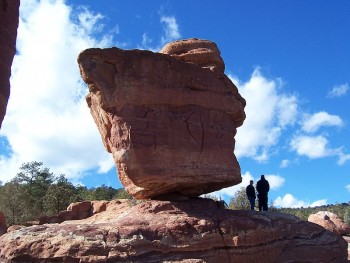 Balancing rock in Garden of the Gods park in Colorado Springs, Colorado via Wikimedia Commons

Balancing rocks touch the ground with only a small fraction of their surface. They often look as if they may tilt or topple over any moment. You can see balancing rocks in Australia or the U.S. Southwest. These boulders are sometimes thought to have riden within glaciers to their current locations. Or, sometimes, wind and water eroded softer material surrounding the rock to turn them into balancing rocks.

But how a balancing rock came to be on Comet 67P/Churyumov-Gerasimenko – which presumably has no glaciers or wind as we experience it on Earth – is not entirely clear. It’s true that, as icy comets draw near their closest points to the sun that binds them in orbit – as 67P will this August – they become warmer and increasingly active. Some of their ices heat up and sublimate to become gas. This process releases dust grains that had been trapped in the ice. The dusty gas from a comet’s icy nucleus forms a glowing cloud around the comet called its coma, from a Latin word for hair.

Scattered boulders can be found in many places on the surface of 67P/Churyumov-Gerasimenko. European Space Agency scientist Sebastien Besse, who discovered the possible balancing rock, said in a statement:

We had noticed this formation already in earlier images. However, at first the boulders did not seem to differ substantially from other we had seen.

And OSIRIS Principal Investigator Holger Sierks – from the Max Planck Institute for Solar System Research (MPS) in Germany – pointed out that:

Interpreting images of the comet’s surface can be tricky.

That is, depending on the viewing angle, illumination, and amount of detail in an image, very different and sometimes even misleading impressions can be created. Remember the face on Mars? Later images, better images, showed it to be an ordinary Martian hill. 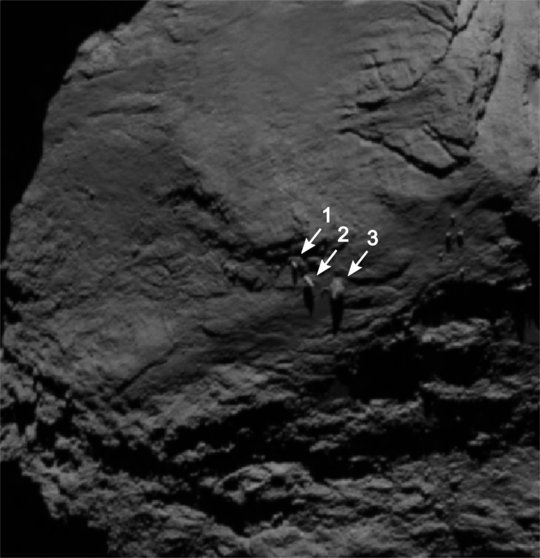 Rosetta’s OSIRIS camera captured this image of the boulders on Comet 67P/C-G on August 16, 2014 from a distance of 65 miles (105 km). Image via ESA/Rosetta/MPS for OSIRIS Team MPS/UPD/LAM/IAA/SSO/INTA/UPM/DASP/IDA.

For example, in the image above – taken from a larger distance of 105 kilometers – the second boulder in the balancing rock formation appears to be protruding like a pillar.

The OSIRIS scientists intend to continue to monitor the potential balancing rock carefully.

They hope that new images will give insights into its true nature and maybe even its origin. 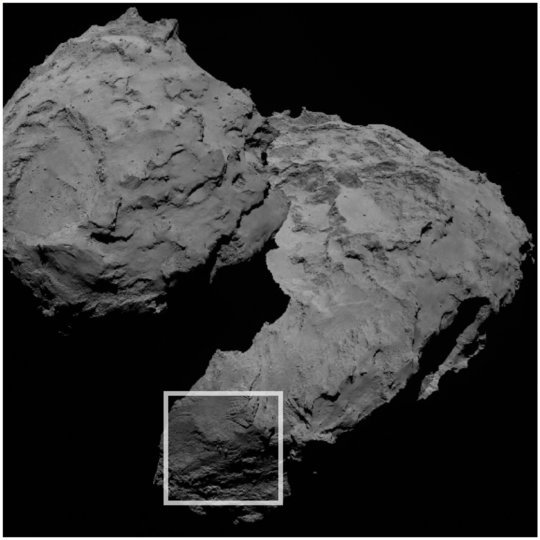 The three boulders are found in the Aker region of Comet 67P/C-G, on the comet’s larger lobe. The square marks their location. Image via ESA/Rosetta/MPS for OSIRIS Team MPS/UPD/LAM/IAA/SSO/INTA/UPM/DASP/IDA.

Bottom line: Scientists using the Rosetta spacecraft’s OSIRIS – its scientific imaging system – have discovered what looks like a balancing rock on Comet 67P/Churyumov-Gerasimenko.