NASA’s 2016 budget request includes $30 million for a mission to Europa, Jupiter’s moon, thought to have a liquid ocean beneath its icy crust. 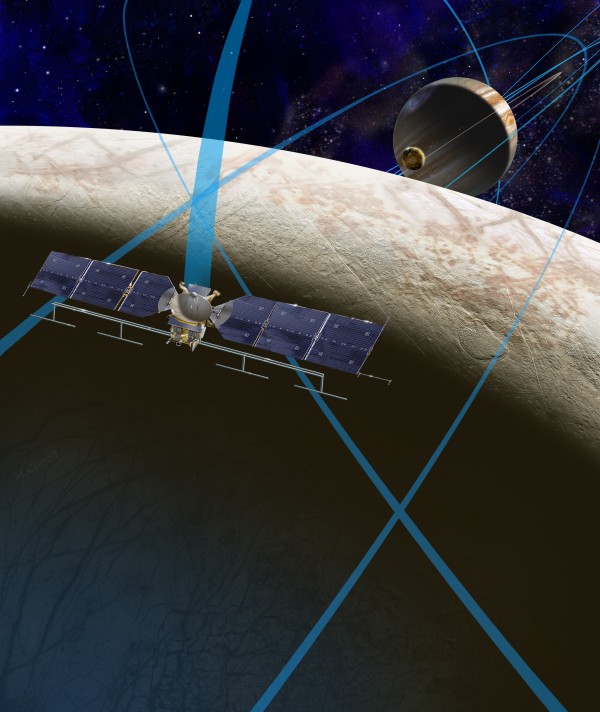 This artist’s rendering shows a concept for a future NASA mission to Europa in which a spacecraft would make multiple close flybys of the icy Jovian moon, thought to contain a global subsurface ocean. Image via NASA/JPL-Caltech

Our solar system has many fascinating worlds, including actual planets, moons of planets and of course sun-orbiting asteroids and comets. Jupiter’s moon Europa is among the most fascinating because – based on evidence from the Galileo spacecraft, which orbited in the jovian system for eight years, beginning in 1995 – Europa is now believed to have a liquid ocean below its icy crust, a possible abode for life. This week (May 26, 2015), NASA announced its selection of nine science instruments for a new mission to Europa.

NASA’s fiscal year 2016 budget request includes $30 million to formulate a mission to Europa, which is proposes to launch in the 2020s. The mission would send a solar-powered spacecraft into a long, looping orbit around the gas giant Jupiter to perform repeated close flybys of Europa over a three-year period. In total, the mission would perform 45 flybys at altitudes ranging from 16 miles to 1,700 miles (25 kilometers to 2,700 kilometers).

Last year, NASA invited researchers to submit proposals for instruments to study Europa. Thirty-three were reviewed and, of those, nine were selected. The payload of selected science instruments includes:

– Cameras and spectrometers to produce high-resolution images of Europa’s surface and determine its composition.
– An ice-penetrating radar will determine the thickness of the moon’s icy shell and search for subsurface lakes similar to those beneath Antarctica.
– A magnetometer to measure strength and direction of the moon’s magnetic field, which will allow scientists to determine the depth and salinity of its ocean.
– A thermal instrument to scour Europa’s frozen surface in search of recent eruptions of warmer water.
– Additional instruments to search for evidence of water and tiny particles in the moon’s thin atmosphere. NASA’s Hubble Space Telescope observed water vapor above the south polar region of Europa in 2012, providing the first strong evidence of water plumes. If the plumes’ existence is confirmed – and they’re linked to a subsurface ocean – it will help scientists investigate the chemical makeup of Europa’s potentially habitable environment while minimizing the need to drill through layers of ice.

If Europa’s sub-surface ocean does exist, it could contain more than twice as much liquid water as that found on Earth. In other words, Europa may be the true water planet in our solar system. And, of course, life as we know it depends on water. With its abundant salty water, rocky sea floor, and the energy and chemistry provided by tidal heating – that is, heating that occurs as Europa is gravitationally squeezed by Jupiter – Europa could be the best place in the solar system to look for present day life beyond our home planet.

Europa has tantalized us with its enigmatic icy surface and evidence of a vast ocean, following the amazing data from 11 flybys of the Galileo spacecraft over a decade ago and recent Hubble observations suggesting plumes of water shooting out from the moon.

We’re excited about the potential of this new mission and these instruments to unravel the mysteries of Europa in our quest to find evidence of life beyond Earth.

This is a giant step in our search for oases that could support life in our own celestial backyard. We’re confident that this versatile set of science instruments will produce exciting discoveries on a much-anticipated mission.

View larger. | Fractures on the icy surface of Europa. Just a week ago, scientists announced the discovery of sea salt welling up in cracks like these in Europa’s surface. Read more.

The NASA selectees are:

Mapping Imaging Spectrometer for Europa (MISE) — principal investigator Dr. Diana Blaney of JPL. This instrument will probe the composition of Europa, identifying and mapping the distributions of organics, salts, acid hydrates, water ice phases, and other materials to determine the habitability of Europa’s ocean.

Europa Imaging System (EIS) — principal investigator Dr. Elizabeth Turtle of APL. The wide and narrow angle cameras on this instrument will map most of Europa at 50 meter (164 foot) resolution, and will provide images of areas of Europa’s surface at up to 100 times higher resolution.

Radar for Europa Assessment and Sounding: Ocean to Near-surface (REASON) — principal investigator Dr. Donald Blankenship of the University of Texas, Austin. This dual-frequency ice penetrating radar instrument is designed to characterize and sound Europa’s icy crust from the near-surface to the ocean, revealing the hidden structure of Europa’s ice shell and potential water within.

Ultraviolet Spectrograph/Europa (UVS) — principal investigator Dr. Kurt Retherford of SwRI. This instrument will adopt the same technique used by the Hubble Space Telescope to detect the likely presence of water plumes erupting from Europa’s surface. UVS will be able to detect small plumes and will provide valuable data about the composition and dynamics of the moon’s rarefied atmosphere.

SUrface Dust Mass Analyzer (SUDA) — principal investigator Dr. Sascha Kempf of the University of Colorado, Boulder. This instrument will measure the composition of small, solid particles ejected from Europa, providing the opportunity to directly sample the surface and potential plumes on low-altitude flybys. 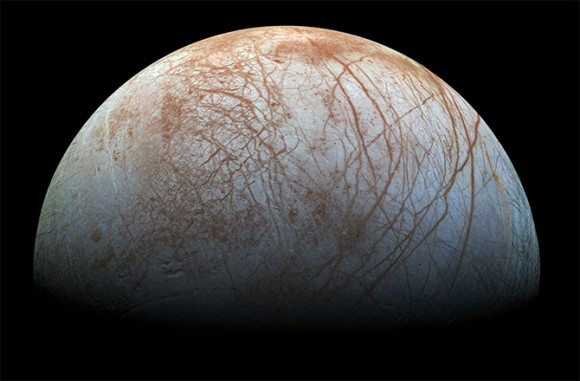 A composite of Europa made from images from the Galileo spacecraft. Image via NASA/JPL

Bottom line: NASA’s 2016 budget request includes $30 million for a mission to Europa, Jupiter’s moon, thought to have a liquid ocean beneath its icy crust. Last year, NASA invited researchers to submit proposals for instruments to study Europa. Thirty-three were reviewed and, of those, nine have now been selected.