The nearest sunlike star is Tau Ceti, only 12 light-years away. It’s now known to have at least 4 planets orbiting it, with relatively small masses, tantalizingly close to Earth’s mass. 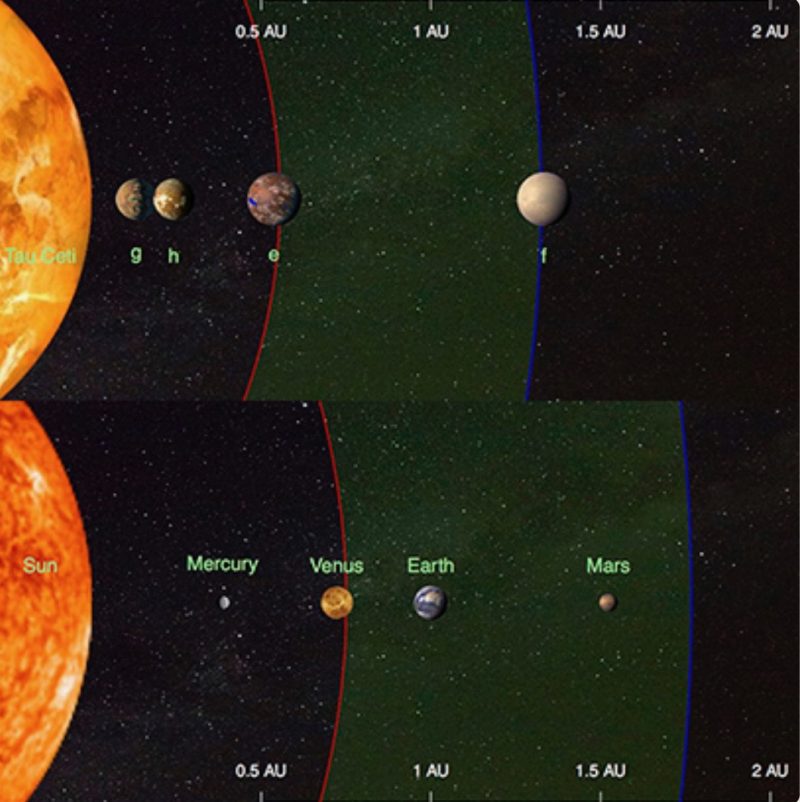 An international team of astronomers has discovered four Earth-sized planets orbiting the nearest sun-like star, Tau Ceti, only about 12 light-years away and visible to the unaided eye. They found the planets by observing tiny wobbles in the star as it appears in our sky, indicating the pull of gravity from unseen planets, and they hailed the discovery as an advance in the technology used to discover planets via this method. A paper describing these researchers’ study has been accepted for publication in the peer-reviewed Astrophysical Journal and is available online as of August 7, 2017. Coauthor Steven Vogt, professor of astronomy and astrophysics at UC Santa Cruz, commented:

We are now finally crossing a threshold where, through very sophisticated modeling of large combined data sets from multiple independent observers, we can disentangle the noise due to stellar surface activity from the very tiny signals generated by the gravitational tugs from Earth-sized orbiting planets. 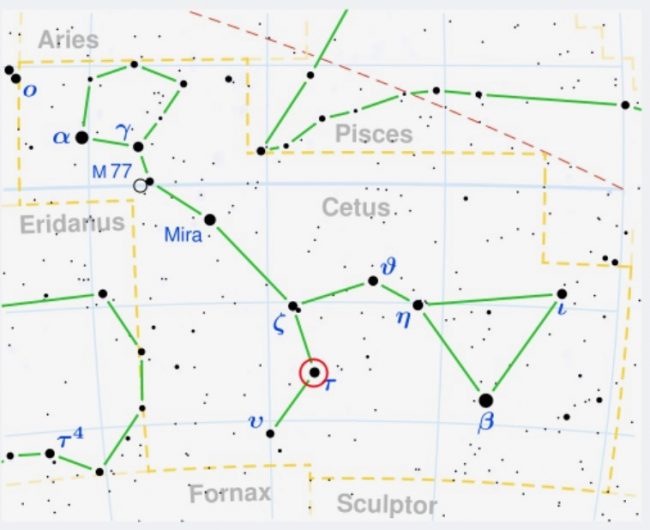 Tau Ceti is a rather faint star in the constellation Cetus the Whale – only 3.5 magnitude – but it is visible to the unaided eye in a dark sky. Image via Wikipedia.

Lead author Fabo Feng of the University of Hertfordshire, UK, said astronomers are getting “tantalizingly close” to being able to detect true Earth analogs, that is, a world like Earth, perhaps with oceans on its surface, perhaps even with life. He said:

Our detection of such weak wobbles is a milestone in the search for Earth analogs and the understanding of the Earth’s habitability through comparison with these analogs. We have introduced new methods to remove the noise in the data in order to reveal the weak planetary signals.

The newly discovered planets have masses as low as 1.7 Earth mass, making them among the smallest planets ever detected around nearby sunlike stars. Two of them are super-Earths located in Tau Ceti’s habitable zone, meaning they have the potential to support liquid water on their surfaces. A statement describing the discovery said:

The outer two planets around tau Ceti are likely to be candidate habitable worlds, although a massive debris disk around the star probably reduces their habitability due to intensive bombardment by asteroids and comets.

Read more about this discovery via UC Santa Cruz

A planet orbiting a star exerts a small gravitational pull which causes the star to wobble very slightly about the system’s center of mass (barycenter). Astronomers can detect these tiny wobbles to discover unknown planets. Image via SuperWasp.

Bottom line: The nearest sunlike star is tau Ceti, only 12 light-years away. It’s now known to have at least 4 planets orbiting it, with masses getting tantalizingly close to Earth’s mass.