The ancients made some jaw-dropping discoveries without modern technology. For example, the size of the moon. 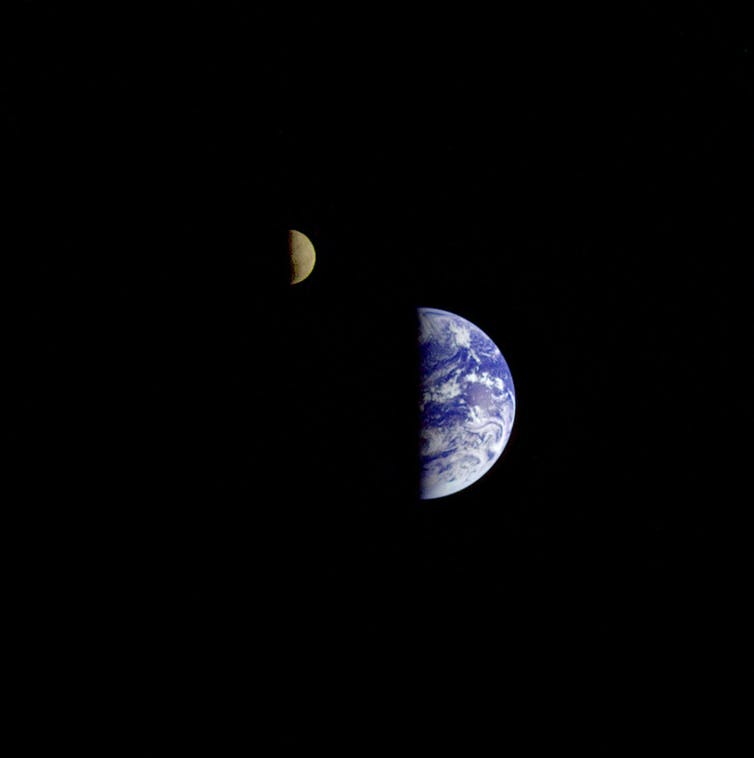 Earth and moon as seen by the Galileo spacecraft. Image via NASA/ The Conversation.

“The Histories” by Herodotus (484 B.C. to 425 B.C.) offers a remarkable window into the world as it was known to the ancient Greeks in the mid fifth century B.C. Almost as interesting as what they knew, however, is what they did not know. This sets the baseline for the remarkable advances in their understanding over the next few centuries – simply relying on what they could observe with their own eyes.

Herodotus claimed that Africa was surrounded almost entirely by sea. How did he know this? He recounts the story of Phoenician sailors who were dispatched by King Neco II of Egypt (about 600 B.C.), to sail around continental Africa, in a clockwise fashion, starting in the Red Sea. This story, if true, recounts the earliest known circumnavigation of Africa, but also contains an interesting insight into the astronomical knowledge of the ancient world.

The voyage took several years. Having rounded the southern tip of Africa, and following a westerly course, the sailors observed the sun as being on their right hand side, above the northern horizon. This observation simply did not make sense at the time because they didn’t yet know that the Earth has a spherical shape, and that there is a southern hemisphere.

1. The planets orbit the sun

A few centuries later, there had been a lot of progress. Aristarchus of Samos (310 B.C. to 230 B.C.) argued that the sun was the “central fire” of the cosmos and he placed all of the then known planets in their correct order of distance around it. This is the earliest known heliocentric theory of the solar system.

Unfortunately, the original text in which he makes this argument has been lost to history, so we cannot know for certain how he worked it out. Aristarchus knew the sun was much bigger than the Earth or the moon, and he may have surmised that it should therefore have the central position in the solar system.

Nevertheless it is a jaw-dropping finding, especially when you consider that it wasn’t rediscovered until the 16th century, by Nicolaus Copernicus, who even acknowledged Aristarchus during the development of his own work.

It had long been observed that the sun and moon appeared to be of the same apparent size in the sky, and that the sun was further away. They realized this from solar eclipses, caused by the moon passing in front of the sun at a certain distance from Earth.

Also, at the instant when the moon is at first or third quarter, Aristarchus reasoned that the sun, Earth, and moon would form a right-angled triangle.

As Pythagoras had determined how the lengths of a triangle’s sides were related a couple of centuries earlier, Aristarchus used the triangle to estimate that the distance to the sun was between 18 and 20 times the distance to the moon. He also estimated that the size of the moon was approximately one-third that of Earth, based on careful timing of lunar eclipses. 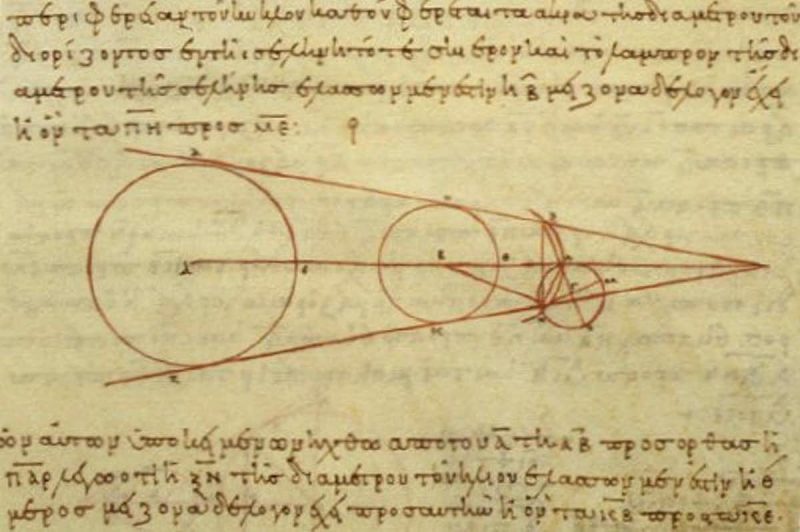 A 10th century reproduction of a diagram by Aristarchus showing some of the geometry he used in his calculations. Image via Wikipedia.

While his estimated distance to the sun was too low (the actual ratio is 390), on account of the lack of telescopic precision available at the time, the value for the ratio of the size of the Earth to the moon is surprisingly accurate (the moon has a diameter 0.27 times that of Earth).

Today, we know the size and distance to the moon accurately by a variety of means, including precise telescopes, radar observations and laser reflectors left on the surface by Apollo astronauts.

Eratosthenes (276BC to 195 B.C.) was chief librarian at the Great Library of Alexandria, and a keen experimentalist. Among his many achievements was the earliest known calculation of the circumference of the Earth. Pythagoras is generally regarded as the earliest proponent of a spherical Earth, although apparently not its size. Eratosthenes’ famous and yet simple method relied on measuring the different lengths of shadows cast by poles stuck vertically into the ground, at midday on the summer solstice, at different latitudes.

The sun is sufficiently far away that, wherever its rays arrive at Earth, they are effectively parallel, as had previously been shown by Aristarchus. So the difference in the shadows demonstrated how much the Earth’s surface curved. Eratosthenes used this to estimate the Earth’s circumference as approximately 25,000 miles (40,000 km). This is within a couple of percent of the actual value, as established by modern geodesy (the science of the Earth’s shape).

Later, another scientist called Posidonius (135 B.C. to 51 B.C.) used a slightly different method and arrived at almost exactly the same answer. Posidonius lived on the island of Rhodes for much of his life. There he observed the bright star Canopus would lie very close to the horizon. However, when in Alexandria, in Egypt, he noted Canopus would ascend to some 7.5 degrees above the horizon.

The world’s oldest surviving mechanical calculator is the Antikythera Mechanism. The amazing device was discovered in an ancient shipwreck off the Greek island of Antikythera in 1900.

The device is now fragmented by the passage of time, but when intact it would have appeared as a box housing dozens of finely machined bronze gear wheels. When manually rotated by a handle, the gears spun dials on the exterior showing the phases of the moon, the timing of lunar eclipses, and the positions of the five planets then known (Mercury, Venus, Mars, Jupiter, and Saturn) at different times of the year. This even accounted for their retrograde motion – an illusionary change in the movement of planets through the sky.

We don’t know who built it, but it dates to some time between the third and first centuries B.C., and may even have been the work of Archimedes. Gearing technology with the sophistication of the Antikythera mechanism was not seen again for a thousand years.

Sadly, the vast majority of these works were lost to history and our scientific awakening was delayed by millennia. As a tool for introducing scientific measurement, the techniques of Eratosthenes are relatively easy to perform and require no special equipment, allowing those just beginning their interest in science to understand by doing, experimenting and, ultimately, following in the footsteps of some of the first scientists.

One can but speculate where our civilization might be now if this ancient science had continued unabated.