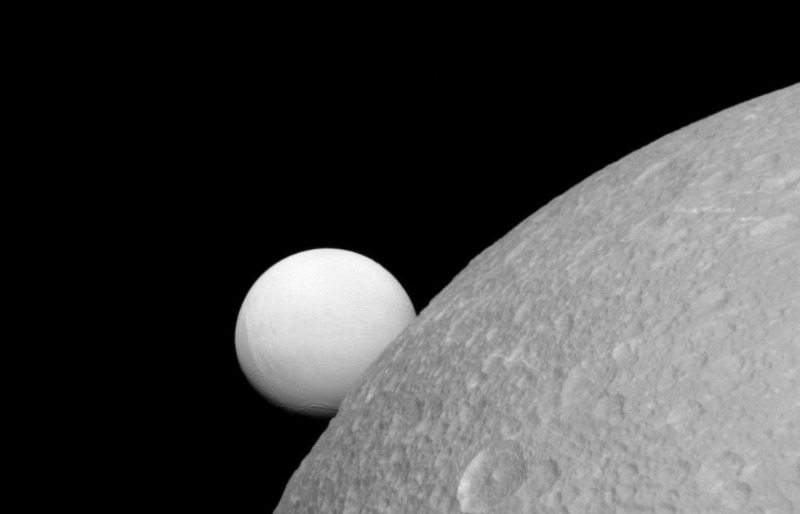 Dione (near) with Enceladus (far) in the background. This image was taken by the Cassini spacecraft in September 2015. Image via NASA/JPL-Caltech/Space Science Institute.

A subsurface ocean lies deep within Saturn’s moon Dione, according to a new study based on data from the Cassini mission. Two other moons of Saturn, Titan and Enceladus, are already known to have oceans under their icy crusts. The new study, published online this week in Geophysical Research Letters, suggests an ocean exists on Dione as well.

Dione is the fourth largest of the 62 moons known to be orbiting Saturn.

According to the study, gravity data from recent Cassini flybys can be explained if Dione’s crust floats on an ocean located 100 kilometers (62 miles) below the surface. The researchers say that

…Seen from within, Dione is very similar to its smaller but more famous neighbor Enceladus, whose south polar region spurts huge jets of water vapor into space. Dione seems to be quiet now, but its broken surface bears witness of a more tumultuous past. 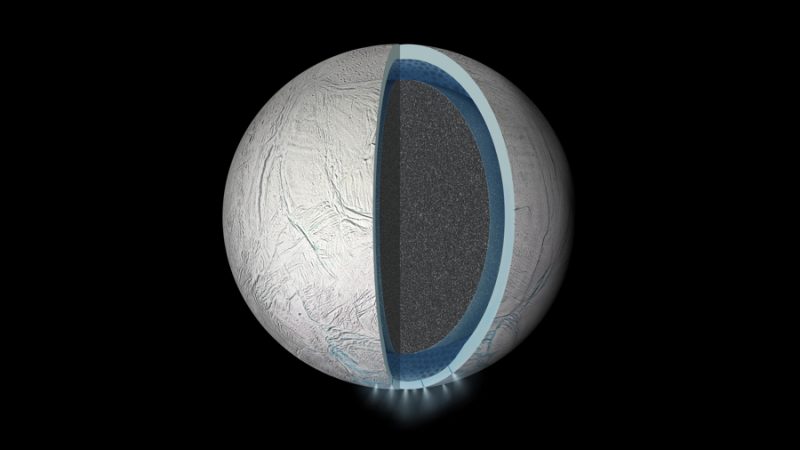 Representation of the interior of Enceladus with icy crust, ocean and solid core. Researchers think that Dione may also have a subsurface ocean Image via NASA/JPL-Caltech/Space Science Institute.

According to the new study, Enceladus’ ocean is much closer to the surface than Dione’s ocean, especially near Enceladus’ south pole where geysers erupt through a few kilometers of crust.

Dione’s ocean has probably survived for the whole history of the moon, say the researchers, and thus offers a long-lived habitable zone for microbial life. Attilio Rivoldini of the Royal Observatory of Belgium is a co-author of the study. Rivoldini said in a statement:

The contact between the ocean and the rocky core is crucial. Rock-water interactions provide key nutrients and a source of energy, both being essential ingredients for life.

The club of “ocean worlds” — icy moons or planets with subsurface oceans — gains new members with each new mission to the outer solar system. So far, scientists have discovered that three ocean worlds orbit Jupiter and three orbit Saturn. Pluto could also belong to the club, according to recent observations of the New Horizons spacecraft.

Bottom line: A new study based on data from the Cassini mission suggests that a subsurface ocean lies deep within Saturn’s moon Dione.

Read more about the study from the Royal Observatory of Belgium