If your browser or smart phone is set up to view it, this 360 video will let you virtually explore a Mars simulation facility at NASA’s Jet Propulsion Laboratory, where engineers are practicing for an upcoming Mars lander mission.

NASA Jet Propulsion Laboratory posted this 360 video on March 8, 2018. If you’re able to view it, the video will let you virtually explore a Mars simulation facility – the In-Situ Instrument Lab – located at the Jet Propulsion Laboratory in Pasadena, California. The lab is being used by engineers to practice operating NASA’s InSight lander, scheduled for launch in May 2018. The voice you hear is engineer Marleen Martinez Sundgaard. To explore, just set your cursor on the video, and move it around. NASA said of the In-Situ Instrument Lab:

They use this testbed to simulate all the functions of the spacecraft, preparing for any scenario it might meet once it touches down on the Red Planet.

InSight is unique in that it’s a lander rather than a rover; once it touches down, it can’t reposition itself. Its job is to stay very still and collect high-precision data. JPL’s testbed for the lander sits on piles of crushed garnet … This garnet simulates a mix of sand and gravel found on the Martian surface but has the benefit of being dust-free. The testbed’s legs are raised or lowered to test operations in an uneven landing area with up to 15 degrees of tilt.

Engineers also pile garnet at different tilts in the testbed’s “workspace” – the area in front of the lander where it practices setting down three science tools: an ultra-sensitive seismometer; a shield that isolates the seismometer from wind and temperature swings; and a heat-flow probe. These three objects are formally called the Science Experiment for Interior Structure (SEIS); the Wind and Thermal Shield (WTS); and the Heat Flow and Physical Properties Probe (HP3).

All this practice ensures InSight can set these objects down safely no matter what surprises its landing site has in store.

InSight will launch from Vandenberg Air Force Base in central California. The launch window opens on May 5. Insight is scheduled to land on Mars in November 2018. 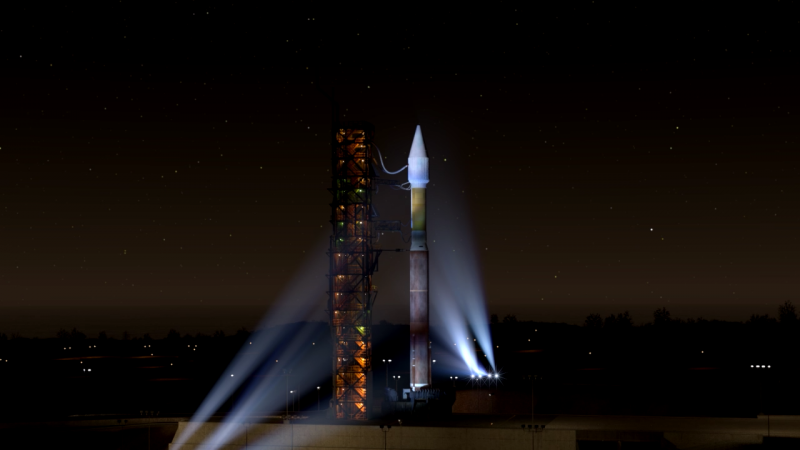 Artist’s concept of Mars Insight launch. InSight is scheduled to launch under pre-dawn skies from Vandenberg Air Force Base on the central coast of California in May 2018. The mission’s launch period is May 5 through June 8, with daily launch windows that last 2 hours per day. Launch opportunities are set five minutes apart during each date’s launch window. The first opportunity begins at approximately 4 a.m. Pacific Standard Time on May 5. InSight will launch from Launch Complex 3 and ride atop an Atlas V-401 rocket. Image and caption via NASA.

Read more about this video from NASA JPL