Comet 2I/Borisov is the 2nd known object to pass near our sun from outside our solar system. Its 2019 pass near our sun might have been its first-ever interaction with a star. If so, it’s among the most pristine, or unspoiled, objects yet known.

We know of only two interstellar visitors – that is, visitors from other star systems – to our solar system. They are 1I/’Oumuamua and 2I/Borisov. ‘Oumuamua gets a lot of press as a strangely-shaped traveler that might be anything from a piece of an exoplanet to an alien spacecraft. The lesser known 2I/Borisov is more clearly a comet that might have originated near a red dwarf star. Its chemical signature suggests it may never have interacted with a star before. If so, said Stefano Bagnulo of the Armagh Observatory and Planetarium in Northern Ireland, U.K.:

2I/Borisov could represent the first truly pristine comet ever observed

He and his team believe 2I/Borisov had never passed close to any star before it flew past our sun in 2019. If that’s so, this object might still hold clues to the gas and dust cloud in which it formed. 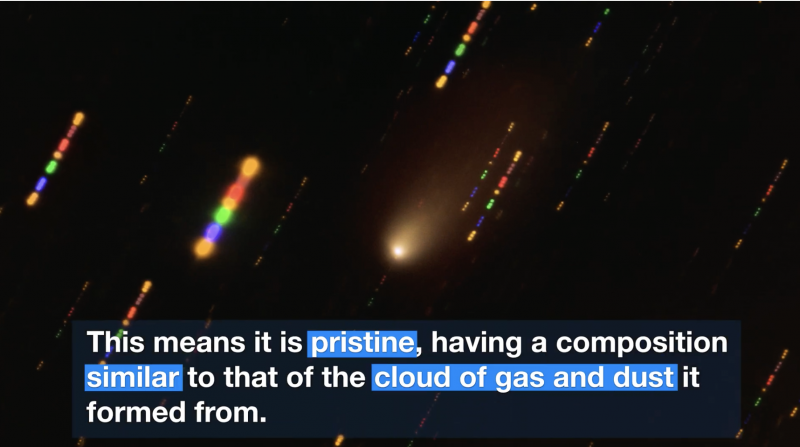 Comet 2I/Borisov passed near our sun in late 2019. In this photo from the Very Large Telescope in northern Chile, the comet is the fuzzy object in the center. The stars appear as streaks because the telescope was trained on the moving comet, not the stars. The rainbow colors of the stars are the result of combining observations at different wavelengths into a composite image. Image via ESO/ O. Hainaut.

A team of scientists led by Bagnulo used a technique called polarimetry to measure polarized light from 2I/Borisov. Light becomes polarized when it passes through filters, such as the lenses of sunglasses or cometary material. By studying the properties of sunlight polarized by a comet’s dust, researchers can learn about the physics and chemistry of comets.

This analysis showed 2I/Borisov to be different from almost all other comets studied except Hale-Bopp. Astronomers believe Comet Hale-Bopp only passed by the sun once before its magnificent return in the late 1990s. That earlier return is thought to have happened thousands of years ago, in 2215 B.C., when Hale-Bopp may have had a near-collision with Jupiter, altering its orbit and bringing it past the sun for the first time. Because of its few interactions with the sun, Hale-Bopp is also considered a pristine comet, having a composition very similar to that of the cloud of gas and dust our solar system formed in 4.5 billion years ago.

The polarization data shows that 2I/Borisov is even more pristine than Hale-Bopp. 2I/Borisov shows untarnished signatures of the cloud of gas and dust of its formation. The evidence also shows that both comets formed under similar conditions, just in different solar systems. As Alberto Cellino of Astrophysical Observatory of Torino said: 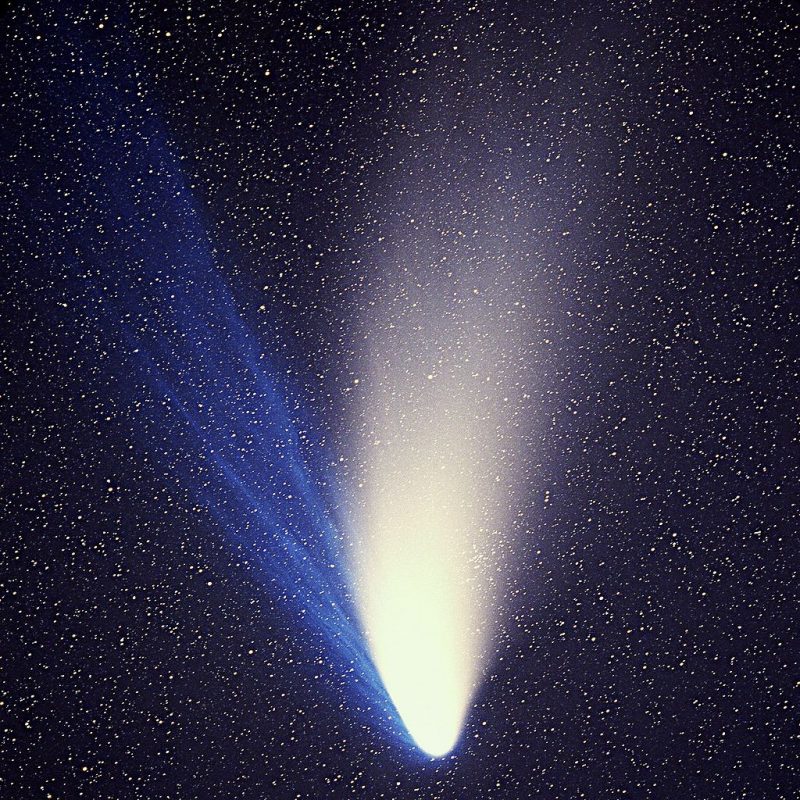 Comet Hale-Bopp, seen here on April 4, 1997, was another of the most pristine comets known, meaning that it has had few interactions with its star, in this case our sun. Comet 2I/Borisov is also pristine, with its flyby near the sun in 2019 believed to be its first interaction with any star. Image via E. Kolmhofer/ H. Raab/ Johannes-Kepler-Observatory/ Wikimedia.

A second team of scientists used telescopic data to analyze the dust grains from 2I/Borisov and published their findings March 30, 2021, in the peer-reviewed journal Nature Astronomy.

They discovered that the comet’s coma – which is the envelope of dust surrounding the main body of a comet – contains compact pebbles. These pebbles are grains about 1 millimeter (.04 inches) in size or larger. The team also noted that the relative amounts of carbon monoxide and water in the comet changed drastically as it neared the sun. According to these scientists, these changes indicate:

… that the comet is made up of materials that formed in different places in its planetary system.

The observations by [Bin Yang, an astronomer at ESO in Chile] and her team suggest that matter in 2I/Borisov’s planetary home was mixed from near its star to further out, perhaps because of the existence of giant planets, whose strong gravity stirs material in the system.

Astronomers believe that a similar process occurred early in the life of our solar system.

When amateur astronomer Gennady Borisov discovered Comet 2I/Borisov in August 2019, it became only the second-known object to visit our solar system from interstellar space. The first discovered was ‘Oumuamua in October 2017. ‘Oumuamua was moving at a swift 58,900 miles (94,800 km) per hour until its swing past the sun sped it up to 196,200 miles (315,800 km) per hour.

These zippy interstellar visitors are both now headed out of the solar system and back on their way to interstellar space.

This diagram compares the paths of the 2 known interstellar objects that have entered our solar system, 1I/ ‘Oumuamua (red, discovered in 2017) and 2I/Borisov (yellow, discovered in 2019). Image via Wikimedia/ Tony873004.

Bottom line: The second-known interstellar object, called Comet 2I/Borisov by earthly astronomers, may be one of the most pristine objects ever seen, according to a new study.

Source: Compact pebbles and the evolution of volatiles in the interstellar comet 2I/Borisov