Previously, only one RR Lyrae star – of many thousands known – was found to orbit in a double star system. Now astronomers have upped the tally by 2000%! 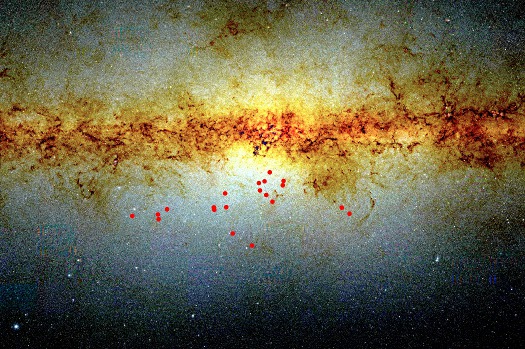 View larger. | Looking towards the central bulge of our own galaxy, the Milky Way, with the positions of the RR Lyrae binary candidates indicated as red circles. Image via D. Minniti / Royal Astronomical Society

Astronomers know of many double star systems, and some systems where three, four, and even more stars all orbit each other. But, for reasons that no one could explain, the class of stars known as RR Lyrae variables appeared to live their lives all alone. Earlier this month (April 1, 2015), astronomers changed this perception, when they announced their finding of some 20 RR Lyrae systems that appear to consist of two stars. That’s an increase in known RR Lyrae binary systems of up to 2000% with respect to previous tallies (in other words, just one such system was known prior to this study). These researchers published their research in Monthly Notices of the Royal Astronomical Society Letters.

RR Lyrae variables – named for the first such star known, the variable star RR in the constellation Lyra – are among the oldest known stars in our galaxy and other galaxies. Studies of them might reveal hidden knowledge about the origin and evolution of our Milky Way. The Royal Astronomical Society explained in a statement:

Suitable binary systems are of extreme importance in astrophysics, as their properties can be inferred with unparalleled accuracy from detailed analysis of their orbital properties.

… the lack of RR Lyrae stars in binary systems has made a direct assessment of some of their key properties difficult.

Most often, theory had to be invoked to fill the gap.

RR Lyrae variables are old stars. They change in brightness in a regular cycle of a few Earth-days, sometimes ranging down to a few hours. The brightness change happens as the star varies in size. As it shrinks, its surface heats up, like a piston compressing air into a small volume. Then, as the RR Lyrae’s surface expands, it cools. Image and caption via edocs.uis.edu.

Of the 22 RR Lyrae binary candidates, 12 have enough data collected about them for the astronomers to conclude with high confidence that they do indeed consist of two stars orbiting each other. Astronomer Gergely Hajdu, lead author of the study, said:

In the solar neighborhood, about every second star is in a binary. The problem with RR Lyrae variables is that for a long time only one of them was known to be in a long-period binary system. The fact that among 100,000 known RR Lyrae stars only one of them had been seen to have such a companion was something really intriguing for astronomers.

In their paper, the astronomers used a method they call the light-travel time effect, which exploits subtle differences in the time it takes starlight to reach us. Hajdu said:

The RR Lyrae stars pulsate regularly, significantly increasing, and then decreasing, their sizes, temperatures, and brightness, in a matter of just a few hours.

When a pulsating star is in a binary system, the changes in brightness perceived by us can be affected by where exactly the star is in the course of its orbit around the companion. Thus, the starlight takes longer to reach us when it is at the farthest point along its orbit, and vice-versa.

This subtle effect is what we have detected in our candidates.

He said the 20 candidate RR Lyrae binaries were found by analyzing roughly 2,000 of the best observed RR Lyrae stars – about 5% of the known population of RR Lyrae variables – located in the direction of the central parts of our Milky Way galaxy. 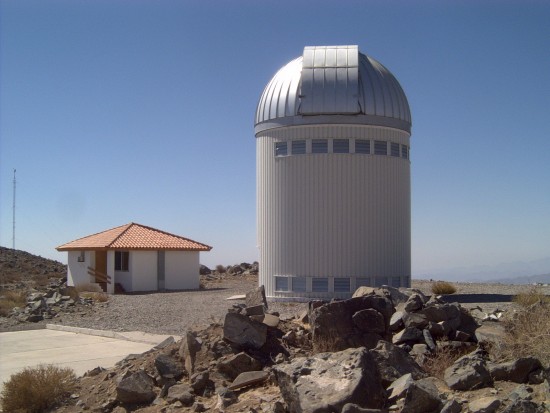 The 1.3-meter telescope used by the OGLE project is located at Las Campanas Observatory in northern Chile. This telescope, used over many years, made the discovery of the RR Lyrae variables in binary systems. Image via University of Warsaw.

The researchers said their new results were due to the high quality of their data, which came from the Polish OGLE Project. The OGLE team has obtained its data using the 1.3-meter Warsaw telescope in Chile. The team repeatedly observed the same patches of the sky for many years. Hajdu said:

The long timespan of these observations let us finally find signs of companions around so many of these stars.