It had been theorized that some young stars might devour their planets. Now astronomers have the 1st solid evidence – from the Chandra X-ray Observatory – of just such an event caught in the act.

Stars give birth to planets. That’s part of the natural order of things in our universe. But did you know that stars can also sometimes eat their planets? Usually, planets will perish when their host star eventually dies and expands; such is the fate awaiting our own Earth and some of the other planets in our solar system. But on July 18, 2018, astronomers at MIT announced the first evidence of a planet being devoured by its star, while the system is still quite young. The astronomers’ findings were published in the peer-reviewed Astronomical Journal.

The star in question, RW Aur A, is part of a group of young stars – 450 light-years from Earth – in the direction of the constellations Taurus and Auriga. It is also part of a binary system, where it circles another young star, RW Aur B.

Other nearby young stars in this same star group had exhibited unusual variability during the near-century that astronomers have been observing them. RW Aur A, in particular, stood out as odd, with its light dimming and then brightening again every few decades. Each dimming period of the star would last about a month. Most recently, the star has dimmed more frequently, for longer periods of time – in 2011, it dimmed for half a year, before fading again in mid-2014 and then returning to full brightness in 2016. Why?

Astronomers now think they have an answer to this baffling mystery. Based on observations using NASA’s Chandra X-Ray Observatory, it’s now thought that a collision between two infant planetary bodies created a huge cloud of dust and gas, which then fell into the star itself. According to Guenther:

Computer simulations have long predicted that planets can fall into a young star, but we have never before observed that. If our interpretation of the data is correct, this would be the first time that we directly observe a young star devouring a planet or planets. 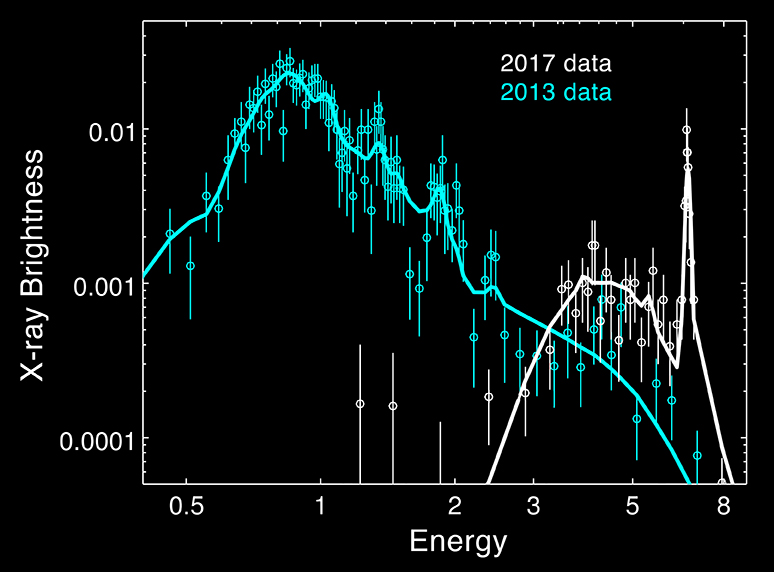 Chandra spectra from the observations in 2013 and 2017. The sharp peak on the right side of the 2017 spectrum is a signature of a large amount of iron. Image via NASA/CXC/MIT/H.M. Guenther. 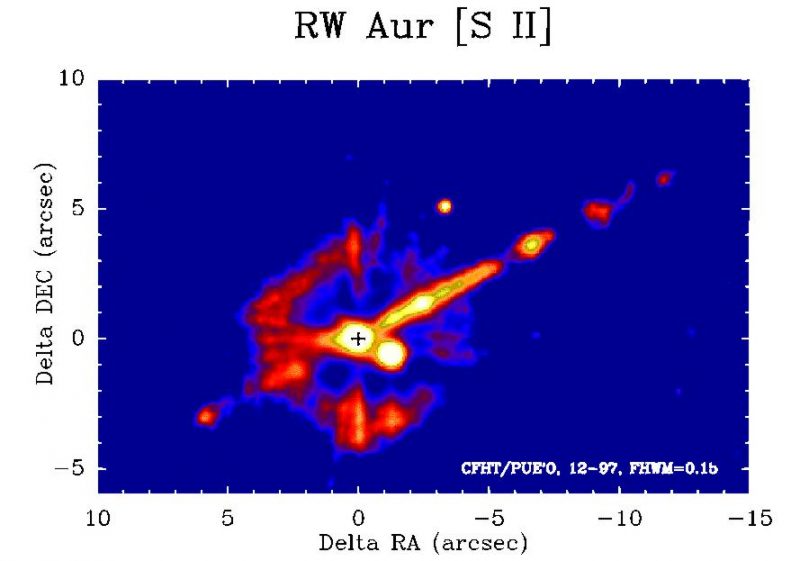 RW Aur A and B as seen by the Canada-France-Hawaii Telescope. Image via C. Dougados/S. Cabrit/C. Lavalley/F. Ménard.

Theories to explain the observations of RW Aur A have ranged from a passing stream of gas at the outer edge of the star’s debris disk to processes occurring closer to the star’s center. According to Hans Moritz Guenther, a research scientist in MIT’s Kavli Institute for Astrophysics and Space Research, who led the study:

We wanted to study the material that covers the star up, which is presumably related to the disk in some way. It’s a rare opportunity.

He said a planet-devouring star would explain the most recent dimming, as well as accounting for previous intermittent dimming of the star. Those previous dimmings could be the result of similar collisions, or the leftover pieces of even earlier collisions that collided again. As Guenther noted:

It’s speculation, but if you have one collision of two pieces, it’s likely that afterward they may be on some rogue orbits, which increases the probability that they will hit something else again.

The Chandra X-Ray Observatory was used to observe the star when it dimmed again in January 2017. The astronomers recorded 50 kiloseconds, or almost 14 hours of X-ray data. As Guenther noted:

The X-rays come from the star, and the spectrum of the X-rays changes as the rays move through the gas in the disk. We’re looking for certain signatures in the X-rays that the gas leaves in the X-ray spectrum.

Here, we see a lot more iron, at least a factor of 10 times more than before, which is very unusual, because typically stars that are active and hot have less iron than others, whereas this one has more. Where does all this iron come from? 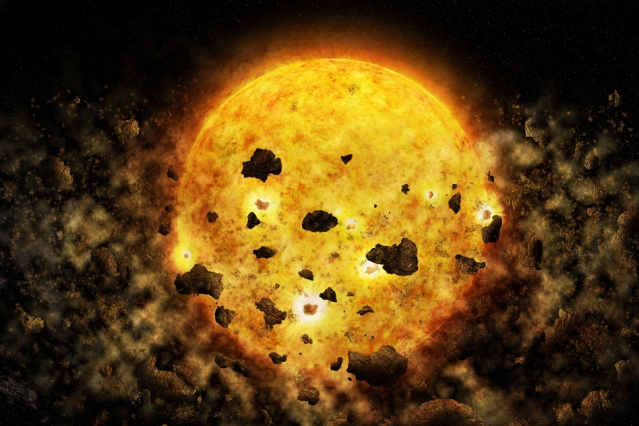 Artist’s concept of the young star RW Aur A devouring a planet. Image via NASA/CXC/M. Weiss.

It is not yet known where the extra iron comes from, but theories include a “dust pressure trap,” where small grains or particles such as iron can become trapped in “dead zones” of a debris disk, or that excess iron is created when two planetesimals, or infant planetary bodies, collide, releasing a thick cloud of particles.

The new results should help astronomers better understand the formation processes of young stars and their solar systems. Very young stars still have debris disks surrounding them, composed of dust, gas and other clumps of material from which planets can form. Our own solar system started out that way. As Guenther explained:

If you look at our solar system, we have planets and not a massive disk around the sun. These disks last for maybe 5 million to 10 million years, and in Taurus, there are many stars that have already lost their disk, but a few still have them. If you want to know what happens in the end stages of this disk dispersal, Taurus is one of the places to look.

Much effort currently goes into learning about exoplanets and how they form, so it is obviously very important to see how young planets could be destroyed in interactions with their host stars and other young planets, and what factors determine if they survive.

Along with Guenther, the research team includes David Huenemoerder and David Principe, both of MIT, as well as researchers from the Harvard-Smithsonian Center for Astrophysics and other collaborators in Germany and Belgium. 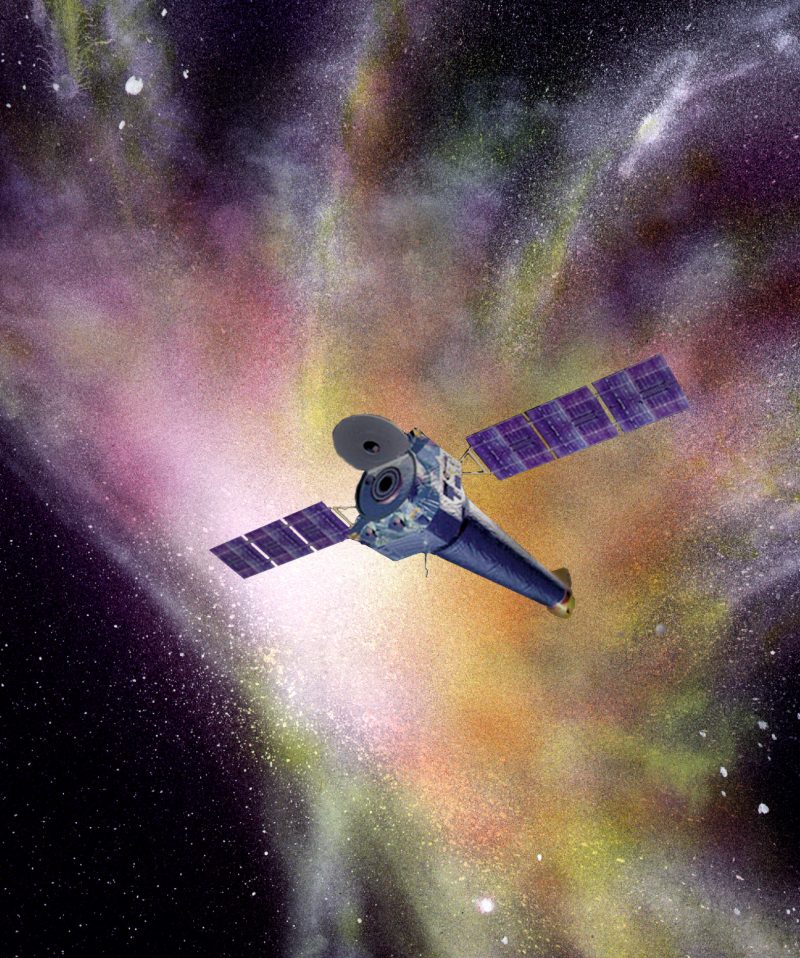 Illustration of the Chandra X-ray Observatory. Image via NASA/CXC/NGST.

Bottom line: It has long been theorized that stars can sometimes devour their own planets, and now astronomers think they have discovered the first evidence of that happening, thanks to X-ray observations from NASA’s Chandra X-Ray Observatory. The new data will provide clues as to how young stars and their planets form and evolve.