For the 1st time, researchers have been able to observe the motion of gas clouds around a central supermassive black hole. This particular black hole powers the famous quasar 3C 273.

Back in the 1960s, astronomers began using the name quasar to describe what they at first called quasi-stellar objects. The first quasars looked starlike, like pinpoints, through optical telescopes, but analysis of their light perplexed astronomers. Now the theory of quasars has made huge strides. They’re pictured as the highly active cores of galaxies in the early universe, powered by gigantic black holes. Yet we still see quasars as starlike through optical telescopes, and detailed observations about the area around the black holes has been hard to come by. Last week – on November 29, 2018 – the Max Planck Institute for Extraterrestrial Physics (MPE) announced that its astronomers have used a new instrument called GRAVITY to get a better look than ever before – in optical light – into the heart of one of astronomy’s most famous quasars, the first quasar ever discovered, called 3C 273.

The new work was published on November 28, 2018, in the peer-reviewed journal Nature.

This international team of astronomers was able to observe the structure of rapidly moving gas around the central supermassive black hole believed to power 3C 273. Prior to this new work, the small angular size of this inner region – its size on our sky’s dome, described as about that of our solar system seen from a distance of 2.5 billion light-years – had made this observation impossible.

The video animation at the top of this post tries to convey some of this story, by first showing you an optical image of 3C273 (you’ll also see this image below). The video then goes to an artist’s impression of the surroundings of the supermassive black hole thought to power this quasar. In the animation, you see the typical components believed to make up supermassive black holes: a dusty torus, very hot, infalling material and a jet of material ejected at high speeds from the black hole’s poles.

Then, in the video, you see what’s new here: a depiction of a spinning whirlpool, an artist’s concept of the recent work completed by astronomers, who were able to get some details about the so-called broad line region, where gas clouds whirl around 3C 273’s central black hole. 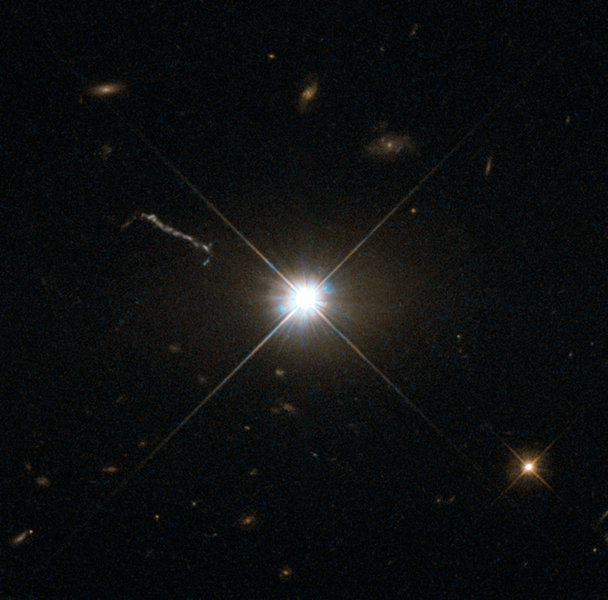 Optical image of the quasar 3C273, obtained with the Hubble Space Telescope. The quasar resides in a giant elliptical galaxy in the constellation of Virgo at a distance of about 2.5 billion light-years. It was the 1st quasar ever to be identified. Image via ESA/Hubble/NASA/MPE.

The technique used by these astronomers isn’t new, but the instrument engaged in the process is relatively new, commissioned in 2016. The instrument is called GRAVITY, and astronomers say it’s allowed for a huge gain in angular resolution, that is, in the clarity with which we see this very distant quasar.

All four of the telescopes that make up the Very Large Telescope (VLT) – located on top of Cerro Paranal in Chile – were used with the GRAVITY instrument to make the new observations of 3C 273. These telescopes combine together via interferometry.

Used with GRAVITY, the astronomers said, the four telescopes became the equivalent of one telescope with a diameter of 427 feet (130 meters, or about the length of one-and-a-half American football fields). 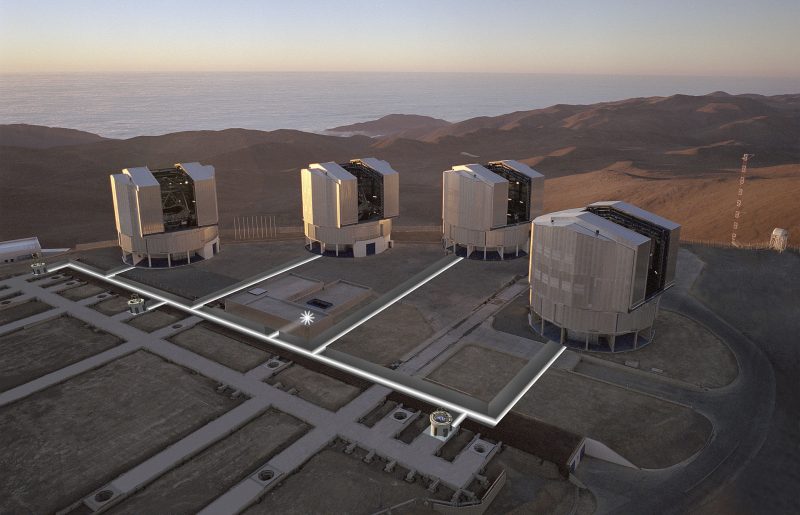 Aerial view of the observing platform on the top of Cerro Paranal, with the four enclosures for the 8.2-meter (27-foot) Unit Telescopes (UTs) and various installations for the VLT Interferometer (VLTI). Read more about this image via Wikimedia Commons.

So with these optical telescopes and the GRAVITY instrument, the astronomers can now see into distant space more clearly. That’s how they’ve obtained never-before-seen details about the central region of quasar 3C 273. Eckhard Sturm of MPE is lead author of the new study. He said:

Detailed observations of the quasar 3C 273 with the GRAVITY instrument reveal the structure of rapidly moving gas around the central supermassive black hole, the first time that the so-called ‘broad line region’ could be resolved. The international team of astronomers was thus able to measure the mass of the black hole with unprecedented precision. This measurement confirms the fundamental assumptions of the most commonly used method to measure the mass of central black holes in distant quasars. Studying these black holes and determining their masses is an essential ingredient to understanding galaxy evolution in general.

This is the first time that we can spatially resolve and study the immediate environs of a massive black hole outside our home galaxy, the Milky Way.

Black holes are intriguing objects, allowing us to probe physics under extreme conditions – and with GRAVITY we can now probe them both near and far. 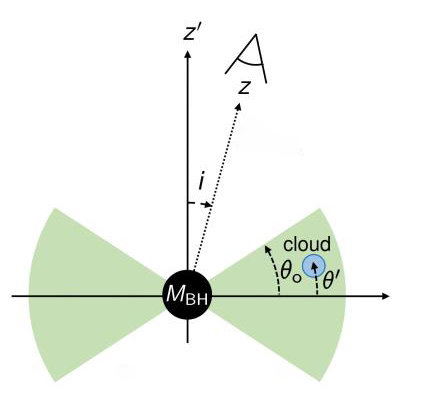 Here the principle geometry of the Broad Line Region of the quasar is shown. The individual clouds are distributed in a thick ring (green shaded area), and rotate around the central black hole. Image via NASA/GRAVITY Collaboration.

More than 50 years ago, in 1963, the astronomer Maarten Schmidt identified the first quasi-stellar object or quasar – this very same quasar still being studied today, 3C 273 – as an object that’s exceedingly distant and almost unimaginably bright. It was clear, even in the 1960s, that the energy emitted by quasars is vastly greater than in normal galaxies such as our Milky Way and cannot be produced by regular fusion processes in stars.

In the decades since then, theoretical astronomers have detailed the theory that quasars get their energy from the processes occurring near supermassive black holes.

Observations such as these recent ones by Eckhard Sturm et al. go a long way toward confirming the work of the theorists. And – because galaxies are the basic structure of our universe, and since supermassive black holes are now thought to lie at the heart of most if not all large galaxies – the work also moves forward astronomers’ understanding of the evolution of the whole universe.

Bottom line: For the first time, researchers have been able to observe the motion of gas clouds around a central supermassive black hole. This particular black hole powers the famous quasar 3C 273.

Source: Spatially resolved rotation of the broad-line region of a quasar at sub-parsec scale