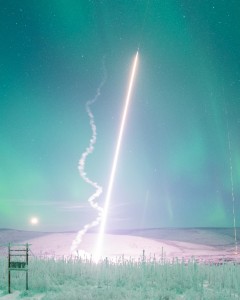 Four rockets launched tonight into the aurora from Poker Flat Research Range in Alaska. The rockets studied mesospheric inversion layers and winds and the upper atmospheres response to auroral precipitation. Four launches within 30 minutes, two of which released trimethyl aluminum trails, was quite spectacular to watch. The smoke trail is from another rocket launched 1 minute prior, and the falling streak in the wider image is the first stage from that rocket falling back down.

Thank you! Your submission has been received!
Oops! Something went wrong while submitting the form.
END_OF_DOCUMENT_TOKEN_TO_BE_REPLACED