These next several days – on June 4, 5 and 6, 2019 – use the young moon to find the planets Mercury and Mars. Then watch for the Mercury-Mars conjunction around June 17 and 18.

Start looking for the young moon in the evening sky around June 4, 2019. Will anyone see it on June 3? Possibly, but by June 4 we should all be able to see it, near the sunset point, shortly after sunset. Elusive Mercury, innermost planet in our solar system, is also in that part of the sky. Red Mars – now rather faint – shines above Mercury. Mercury can be found near the moon on June 4; then on June 5 and 6, the moon’s lighted face points to Mars. Just note that Mars is far behind Earth now in the race of the planets around the sun. Earth will soon “turn the corner” ahead of Mars in orbit, sending the planet into the sunset glare. Mars is so faint now that it might not be visible until nightfall, after the moon and Mercury have already set. In other words, have your binoculars handy.

View at EarthSky Community Photos. | Our friend Helio de Carvalho Vital in Rio de Janeiro, Brazil, caught images of Mercury on May 31, 2019, to make this time-lapse movie. He wrote: “The photo shows elusive Mercury, shining at magnitude -1.2, 24 minutes after sunset. It was a mere 3 degrees above Rio`s horizon, while the sun was 6 degrees below … The western sky was mostly clouded, but fortunately a narrow gap in the clouds that lasted about 2 minutes allowed me to get some images.” Thanks, Helio!

Mercury, on the other hand, is brighter than Mars now, although it might not look brighter to you this week because it’s still near the sunset. In both the Northern and Southern Hemispheres, June 2019 presents a fine apparition of Mercury in the evening sky. On these early June evenings, Mercury is some five times brighter than a 1st-magnitude star and 10 times brighter than Mars. Even though this planet has to contend with the afterglow of sunset, you might be able to see Mercury with the eye alone an hour or so after sunset. If not … yep, you guessed it. Try your binoculars. 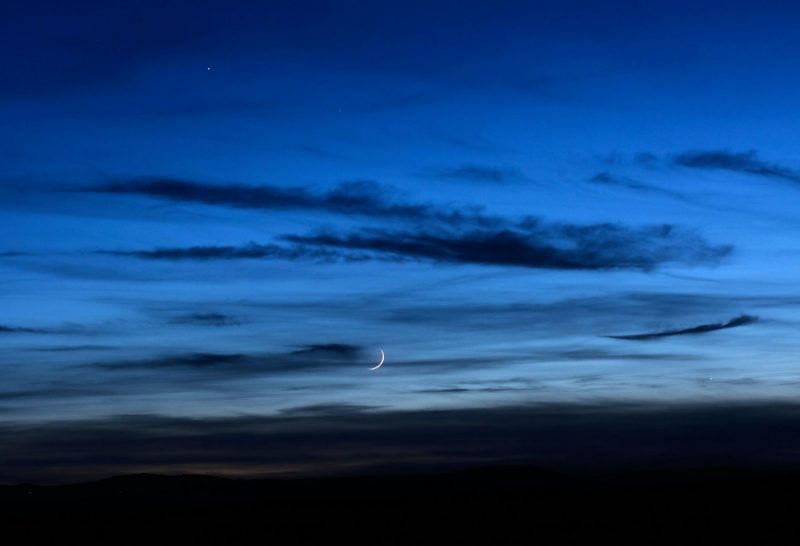 Be forewarned. On June 4, the moon is a thin and pale lunar crescent that pops out rather low in the western sky (along with Mercury) at evening dusk. Both the June 4 moon and Mercury will follow the sun beneath the horizon before it gets good and dark. Depending on where you live worldwide, the June 4 moon might – or might not – stay out as late as nightfall. No matter where you live worldwide, your best bet for catching the moon and Mercury is to find an unobstructed horizon in the direction of sunset. Also, on this evening, watch for earthshine softly illuminating the darkened portion of the moon.

If you miss seeing the waxing crescent moon after sunset on June 4, try again on the evenings of June 5 and 6 (when the moon will be higher up and closer to Mars). Day by day, a wider and brighter lunar crescent will will stay out longer after dark. By June 6, the moon will be near the two brightest stars in the constellation Gemini the Twins. These stars are noticeable for being bright and close together in our sky.

Read more: Castor is 6 stars in one

Day by day, Mercury will climb upward, away from the glare of sunset, until this inner world reaches its highest point in the evening sky on June 23, 2019. Meanwhile, Mars will be falling downward, sinking closer and closer to the setting sun. So watch for Mercury and Mars to snuggle up quite close together in the evening sky on June 17, 18 and 19, with Mercury passing a scant 0.2 degrees north of Mars on June 18, to present the closest conjunction of two planets in 2019. (For reference, 0.2 or 1/5th degree spans less than a pencil width at arm’s length.) Starting around June 11, Mercury and Mars should be close enough together on the sky’s dome to take stage within a single binocular field. 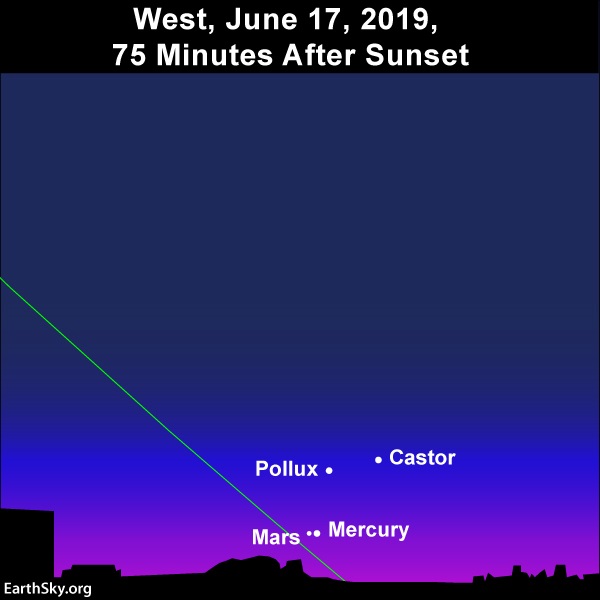 As seen from North America, Mercury and Mars will stand side by side after sunset June 17, 2019.

Click here to know when the moon sets in your sky, remembering to check the moonrise and moonset box

Click here to find out when Mercury and Mars set in your sky, remembering to choose Mercury or Mars as your celestial object of interest.