Fresh from Monday’s eclipse, the moon is now back in the west after sunset, about to sweep near the bright planet Jupiter. 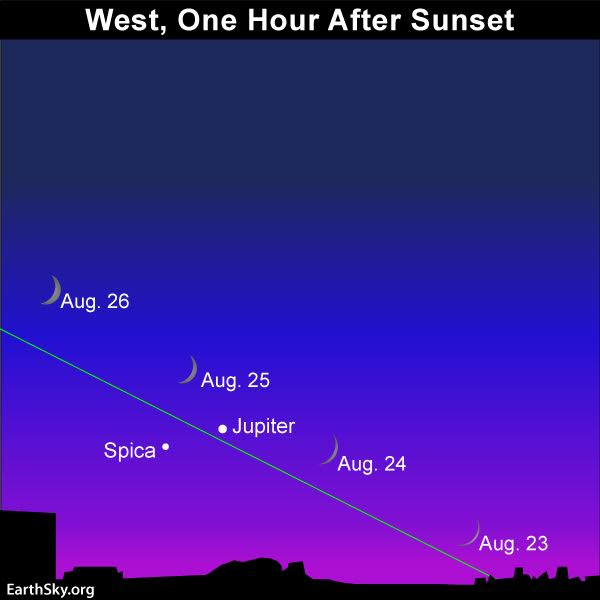 Tonight – August 23, 2017 – go young moon hunting. It might be your first glimpse of the moon since Monday’s eclipse (or you might have seen the moon last night).

Look for the slender waxing crescent moon low in your western sky at dusk and nightfall. The bright object nearby is a planet, Jupiter. Just don’t delay. The moon will follow the sun beneath the horizon by nightfall or early evening. Click here to find out the moon’s setting time in your sky, remembering to check the moonrise and moonset box.

More often than not, the new moon – that is the moon most directly between the Earth and sun for any given month – doesn’t cover the sun as seen from Earth. So, most of the time, you can’t see the new moon. It rises and sets with the sun, and travels across the sky during the day, lost in the sun’s glare.

At Monday’s eclipse, of course, the moon took dead aim on the sun in our sky, blotting it from view. In the months to come, the new moon will swing above (north of) the Earth-sun line for five months (September, October, November, December and January). Finally, on February 15, 2018, we’ll have another eclipse – a partial solar eclipse this time – visible over the far-southern part of the globe.

That’s what is happening on August 23. 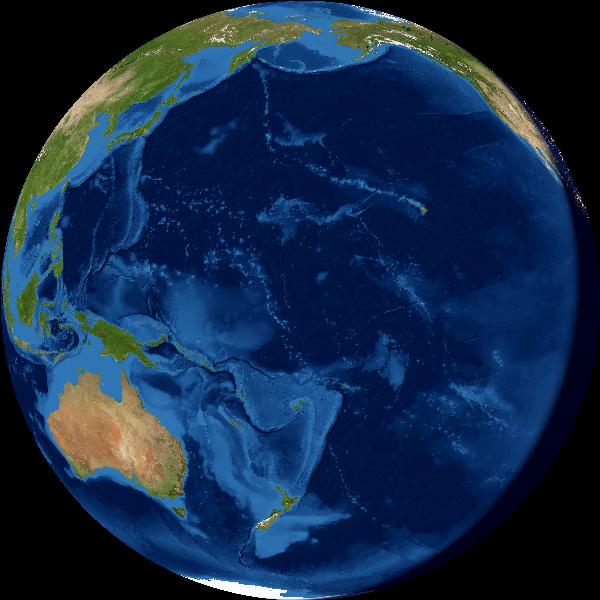 If you were on the near side of the moon as the sun sets over North America on August 23, 2017, you’d only see a tiny sliver of the Earth’s nighttime side (at far right). The Earth – seen from the moon – would be in what’s called a waning gibbous phase. Image via EarthView.

When the moon is a waxing crescent in Earth’s sky, then someone on the moon would see a waning gibbous Earth in the moon’s sky.

That’s a bright Earth! And it’s why – when we see a crescent moon – we see the dark portion of the moon glowing faintly. It’s because that bright Earth shines in the lunar night, casting reflected sunlight on the lunar landscape, just as a nearly full moon softly illuminates our earthly landscape at night. This dim glow of light on the moon is called earthshine. Look for it to softly illuminate the dark side of the moon for the next few nights.

Binoculars may well enhance the view of earthshine.

Binoculars will also accentuate the three-dimensional view of the lunar terrain along the terminator – the line dividing day from night on the moon.