A beautiful sight in the west after sunset for the next few evenings … the brightest planet Venus near the returning young moon. 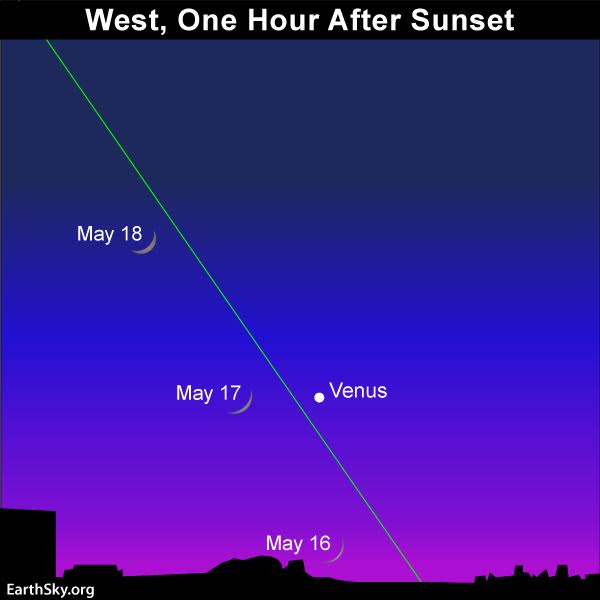 On the evenings of May 16 to 18, 2018, watch for the young moon and the dazzling planet Venus at evening dusk.

Most of the world has a reasonably good chance of catching the lunar crescent with the eye alone on May 16, given an unobstructed horizon and clear skies. North and South America, Hawaii and the islands of the Pacific have the advantage because – from those locations – a wider lunar crescent stays out longer after sundown on May 16. Even so, a good deal of the world’s Eastern Hemisphere will be in a decent position to catch the May 16 young moon and Venus as well.

On the evening of May 16, the whisker-thin and pale lunar crescent will be sitting low in the sky, below Venus. It’ll be to your advantage to find an unobstructed horizon in the direction of sunset on that evening. 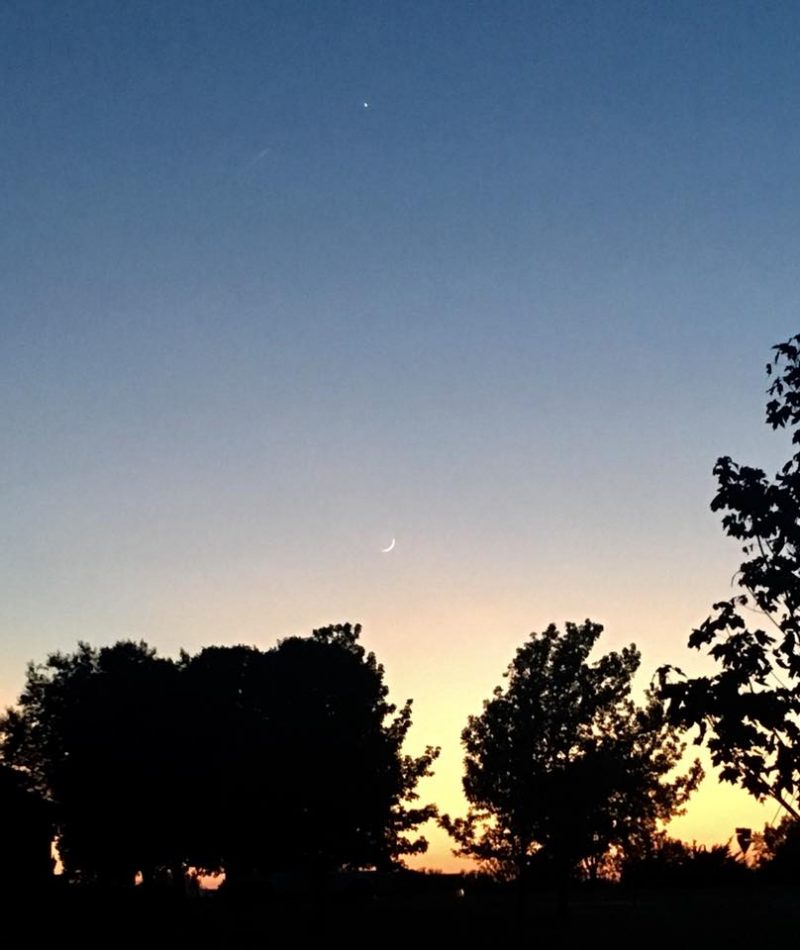 On May 17, a wider lunar crescent will pair up more closely with Venus, and, moreover, stay out longer after dark. On May 18, the moon will be a wider crescent still, staying out still later in the evening. This movement of the moon from night to night is, of course, due to its motion in orbit around Earth.

Keep in mind that binoculars always come in handy for skywatching. That’ll be especially true on May 16, when the moon will be in bright twilight.

On any of these evenings, you should have little trouble catching Venus, assuming you have clear skies to the west after sunset. Once you spot Venus at dusk or early evening, turn around and look in the opposite direction. That bright beauty will be the king planet Jupiter, the second-brightest planet after Venus.

Jupiter, the fifth planet outward from the sun, is what’s called a superior planet. That is, it’s a planet that orbits the sun outside of Earth’s orbit around the sun. Through the telescope, a superior planet always appears full or close to full in Earth’s sky.

If you looked through a telescope now, perhaps you’d expect Venus to display a phase close to that of the waxing crescent moon we see on May 16 to 18. It’s natural to think it, because these two worlds reside so close on the sky’s dome. But, no, you wouldn’t see Venus in the same phase as a crescent moon now. The moon looks like a crescent now because it’s located in space just to one side of a line between the sun and Earth. On the other hand, Venus lies on the far side of the sun from Earth right now. If you saw it through a telescope, you’d find it in a waning gibbous phase, more than half lighted but less than full.

Image of the inner solar system – Mercury, Venus, Earth and Mars – via Solar System Live. Venus appears as a waning gibbous phase in the telescope during May 2018 because Venus lies on the far side of the sun as viewed from Earth.

On September 21, 2018 – near the day of the September equinox for 2018 – Venus will be about 25% illuminated by sunlight. At that time, it’ll reside in between the sun and Earth.

Day by day in the coming months, Venus in its orbit will be sweeping up behind Earth in the race of the planets around the sun. In mid-August 2018, the telescope will reveal Venus as half-illuminated (like a last quarter moon). After that, the phase of Venus will continue to wane to a crescent phase.

Want to know the present phase of the moon and Venus? Click here.

Believe it or not, Venus will appear brightest in our evening sky around the September 2018 equinox, when it’s about 25% illuminated by sunshine.

Venus will finally disappear from the evening sky in October 2018.

Bottom line: There’s a beautiful sight in the west after sunset on May 16 to 18, 2018 … the brightest planet Venus near the returning young moon.