Springtime is a beautiful time of year to watch for young moons. You might have seen one last night. Friday evening’s young moon is even easier to spot, especially if you’re in the Northern Hemisphere.

From many places worldwide – especially at temperate latitudes to the south of Earth’s equator – it was a challenge to spot the young moon in the west after sunset on March 7, 2019. After all, the moon was new – or most nearly between the Earth and sun for this month – on March 6 at 16:04 UTC; translate to your time. So it was a very skinny waxing crescent that was out after sunset on March 7, a pale whisker of a crescent bleached out by the haze of early evening twilight. Plus the moon set shortly after the sunset on March 7.

On the other hand, the young moons on the evening of March 8, 9 and 10 will be much easier to see. And the weeks around the spring equinox are the best time to look for very young moons.

For the Northern Hemisphere, that means now! 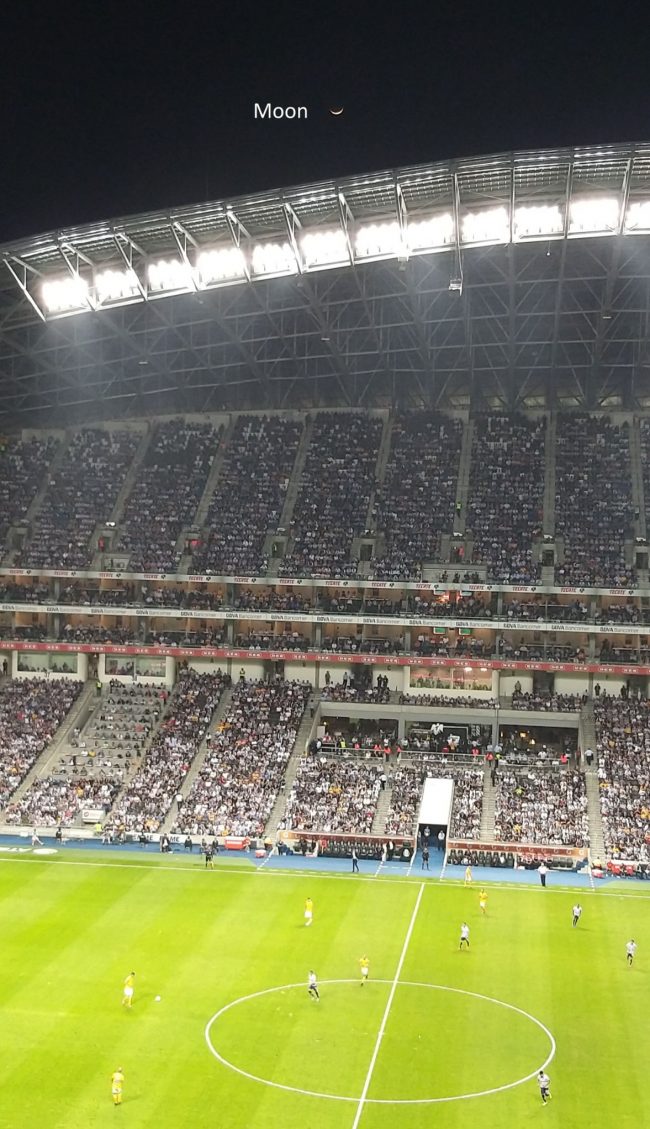 By the way, for the fun of it, we also show Mercury on our sky chart above. We don’t know if any of you super sky gazers will spot this faint world, which is also near the sunset now.

After March 7, the evening crescent moon will get progressively easier to glimpse, while Mercury heads back into the sunset glare. 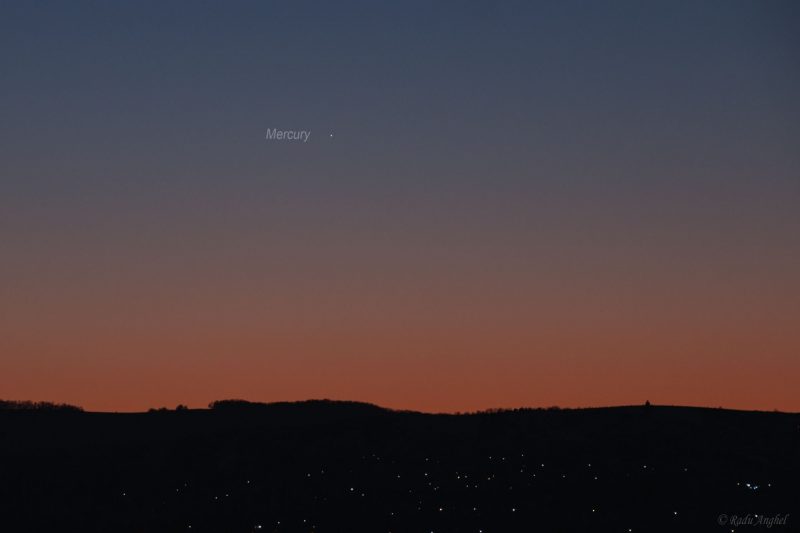 View at EarthSky Community Photos. | EarthSky friend Radu Anghel in Bacau, Romania, caught Mercury after sunset on February 17, 2019. He said it was about an hour after sunset. Thank you, Radu!

It’s tough to catch a moon that’s less than a day (24 hours) from new. The worldwide map below shows you where the sun set over eastern Europe and eastern Africa when it was exactly one day (24 hours) after new moon (March 7, 2019, at 16:04 UTC).

In this part of the world, on March 7, the moon was less than one percent illuminated by sunshine and set less than one hour after sunset. 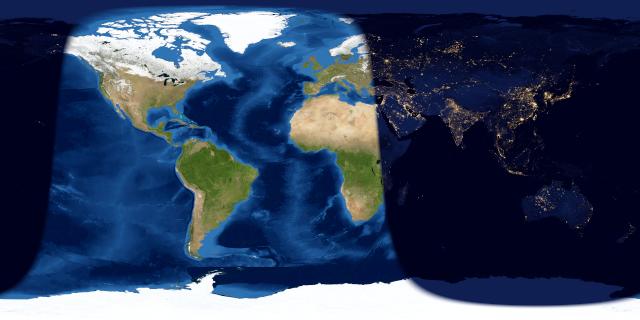 Worldwide map showing the line of sunset exactly one day after new moon. New moon fell on March 6, 2019, at 16:04 UTC, so one day after full moon was March 7 at 16:04 UTC. If you were east of this line, the moon was harder to see on March 7. If you were west of it, you had an easier time because – as Earth spins under the sky – the moon was moving in orbit, increasing its distance from the sun. By March 8, 9, and 10, we’ll all be able to see the young moon. Image via Fourmilab’s EarthView.

And – as we said – young moons are easiest to see around late winter/early spring and least so around late summer/early autumn. Thus the Northern Hemisphere was favored for the March 7 young moon sighting, and it’s favored on the nights after that as well. The reason is that the ecliptic – the approximate monthly path of the moon in front of the constellations of the zodiac – hits the horizon at a relatively steep angle as the sun sets in the Northern Hemisphere. See featured sky chart at the top of this post. 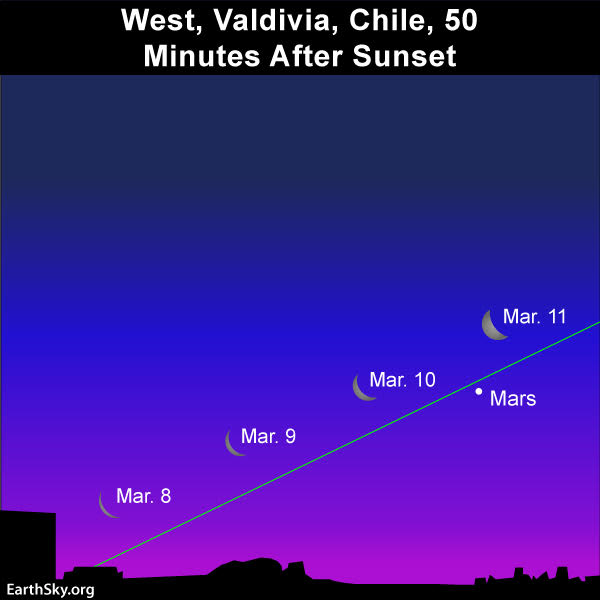 Here’s a view of March 2019’s young moon from Valdivia, Chile, South America (40 degrees south latitude). From the Southern Hemisphere in March, the ecliptic – or path of the sun, moon and planets – makes a narrow angle with the evening horizon. So the distance of the young moon from the sunset is more sideways along the horizon, not straight up above it.

No matter where you live worldwide, it’ll be easier to spot the young moon in the evening sky in the days following March 7. That’s because, day by day, the waxing crescent widens as the moon in its orbit moves farther east from the setting sun. Watch for the moon to climb upward, in the direction of the planet Mars, over the next several days.

From 40 degrees north latitude, where the angle of the ecliptic is steep, the young moon will set approximately one hour later each day for the next several days.

Yet, from 40 degrees south latitude, where the angle of the ecliptic is shallow, the young moon will set roughly 1/2 hour daily later for the next several days.

Click here to find out when the moon sets in your sky, remembering to check the moonrise and moonset box. 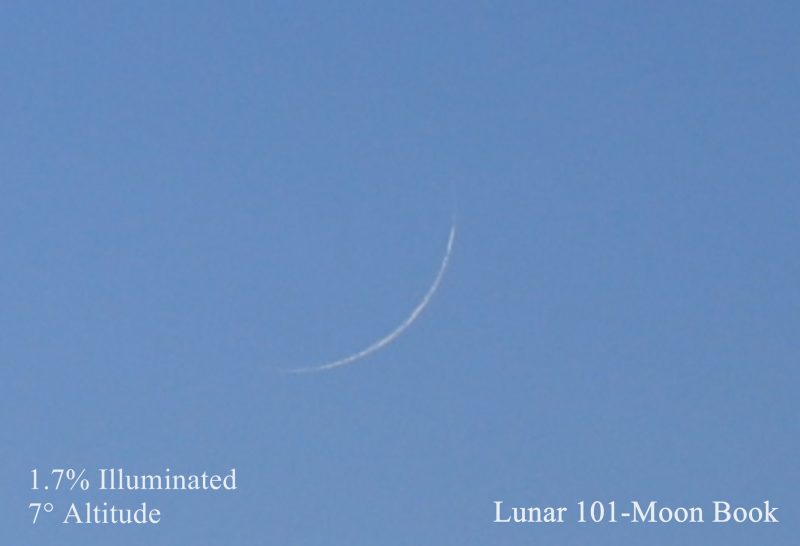 View at EarthSky Community Photos. | Steven A. Sweet of Lunar 101-Moon Book caught the young moon from the North American east – Ontario, Canada – on March 7, 2019. He said he couldn’t see it with the eye, but found it later while going through his photos. Thanks, Steven! 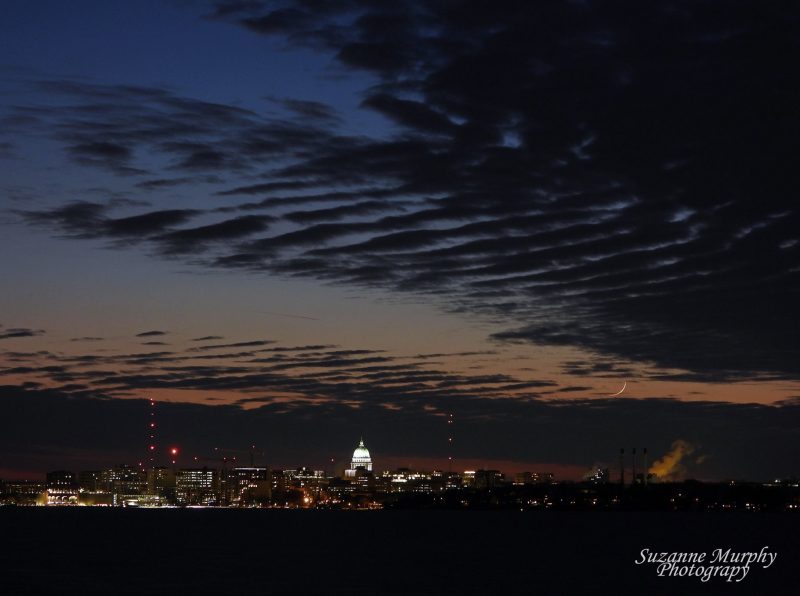 Despite the cloud cover, our friend Suzanne Murphy managed to catch the young waxing crescent moon over Madison, Wisconsin – in mid-North America – at dusk March 7, 2019. Thank you, Suzanne!

Bottom line: Springtime is a beautiful time of year to watch for young moons.