Notice … the year’s most distant perigee comes when the moon is near last quarter phase.

Image above: The moon’s orbit around Earth isn’t a perfect circle. But it’s very nearly circular, as the above diagram shows. Diagram by Brian Koberlein.

The moon sweeps to perigee – its closest point to Earth in its orbit – on December 18, 2019. This perigee counts as the most distant of this year’s 13 perigees. So you might say today’s moon is the farthest close moon. Notice … this most distant perigee comes when the moon is near last quarter phase. That is not an accident. More below. 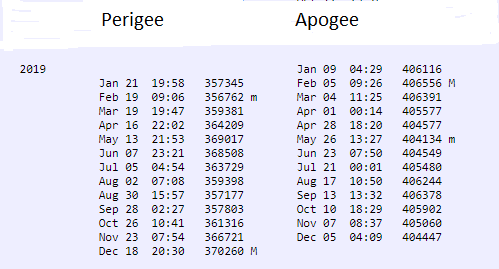 What’s more, like everything else in nature, the moon’s orbit is always in flux. Its shape and its orientation relative to the Earth and sun change all the time.

So we have a moon at perigee – closest to Earth for the month – and also a moon at its last quarter phase only 1/3rd day later.

The moon’s orbit is closer to being a circle than the diagram suggests, but the exaggeration helps to clarify. The moon is closest to Earth in its orbit at perigee and farthest away at apogee.Image via NASA.