Will you see Mercury before sunrise?

From the Southern Hemisphere, these next weeks are your best opportunity of 2018 to spot the sun’s innermost planet, Mercury. From the Northern Hemisphere … not so much. 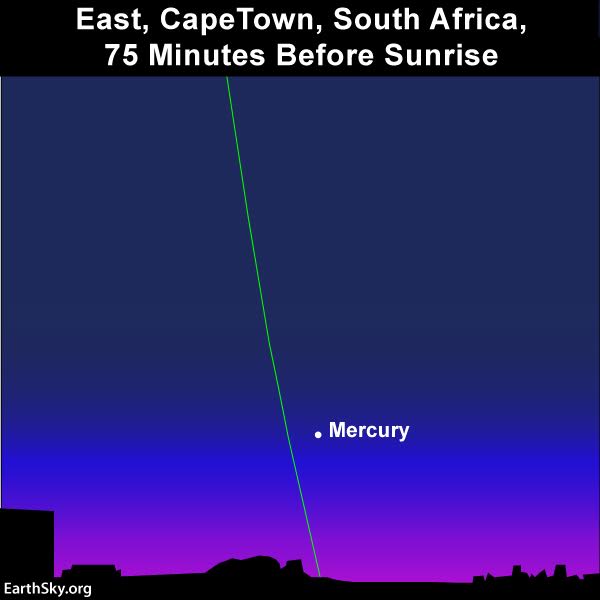 Looking for info on the April 29-30 full moon? Click here

In late April 2018, the sun’s innermost planet Mercury swings to its greatest western elongation from the sun, that is, its farthest point west of the sun in our sky for this morning apparition. Mercury is 27 degrees west of the sun at its farthest, this time around. It’s low in the eastern sky before sunrise. Farthest from the sunrise … sounds easiest to view, right? That’s true for the Southern Hemisphere, and the coming few weeks offer Mercury’s best apparition in the morning sky for all of 2018 for southerly latitudes. Yet at northerly latitudes, this is Mercury’s poorest showing in the morning sky for the year.

The featured sky chart above is especially for the Southern Hemisphere. It’s specifically for Cape Town, South Africa, which is roughly the same latitude as Sydney, Australia; Auckland, New Zealand; and Santiago, Chile. Given an unobstructed eastern horizon, all these places should be able to view Mercury with the eye alone in a predawn sky. At temperate latitudes in the Southern Hemisphere (South Africa, southern Australia, New Zealand), Mercury rises better than two hours before the sun.

That’s in spite of the fact that this present morning apparition will last for yet another month.

Click here for recommended almanacs; an almanac can give you Mercury’s rising time in your sky. 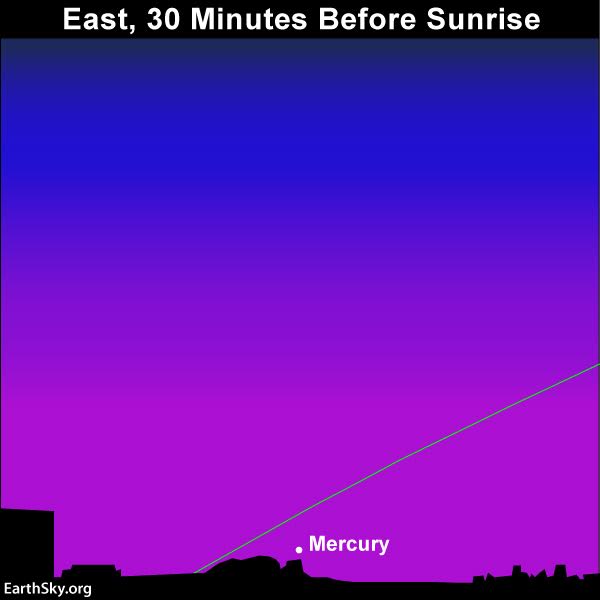 At northerly latitudes, the shallow angle of the ecliptic – the pathway of the sun, moon and planets – on springtime mornings keeps Mercury buried in the glare of sunrise.

Why is this morning showing of Mercury so outstanding from the Southern Hemisphere, but so poor in the Northern Hemisphere? Mercury’s distance west of the sun (27 degrees) is the same for the whole Earth. Here’s what’s different. The ecliptic – the roadway of the sun, moon and planets across the sky – makes a narrow angle with the predawn horizon in spring. Meanwhile, in autumn, it makes an exceptionally steep angle (nearly perpendicular) with the predawn horizon … and it’s autumn now south of the equator.

Bottom line: If you live in the Southern Hemisphere, late April and early May 2018 present your best opportunity of 2018 to spot Mercury, the innermost planet, in the east before sunrise.