On October 5, the Harvest Moon

The Northern Hemisphere’s Harvest Moon is the full moon closest to the September equinox. It’s tonight! Watch for it. 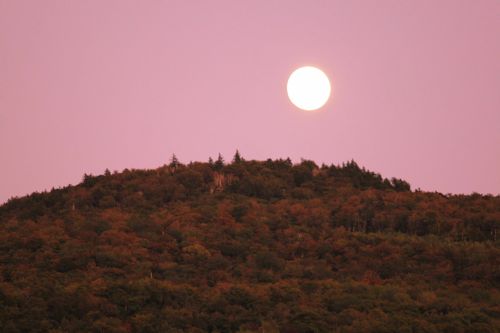 Tonight – October 5, 2017 – that full moon you’ll see ascending in the east after sunset is the Northern Hemisphere’s Harvest Moon.

Over the years, we’ve seen lots of informal uses of the term Harvest Moon. Some people (in the Northern Hemisphere) call the full moons of September and October by that name. And that’s fine. For the few months around the autumn equinox – both September and October for us in the Northern Hemisphere – the time of moonrise is close to the time of sunset for several evenings in a row, around the time of full moon. It’s as if there are a few full moons in a row during each autumn month.

Astronomers are scientists, though, and it’s no surprise that, to them, the term full moon or the name Harvest Moon means something very specific. To astronomers, the Harvest Moon is the full moon closest to the September equinox, and full moon comes at the instant when the moon is 180o from the sun in ecliptic – or celestial – longitude.

But don’t worry too much about the instant of full moon, or the time on your clock, or even where you are on the globe. No matter where you live worldwide, you’ll see a full-looking moon shining from dusk until dawn on the night of October 5.

Tonight’s October Harvest Moon rises in the east around sunset, climbs highest up around midnight and sets in the west around sunrise. At the vicinity of full moon, the moon – as always – stays out all night long.

Is tonight’s moon the Harvest Moon? It sure is – at least for the Northern Hemisphere!

Meanwhile, for the Southern hemisphere, this is the first full moon of spring. 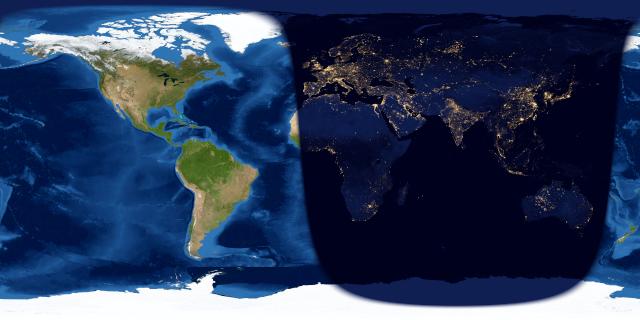 Day and night sides of Earth at the instant of full moon (2017 October 5 at 18:40 Universal Time) via Earth and Moon Viewer. The shadow line at left represents sunset October 5, and the shadow line at right depicts sunrise October 6. 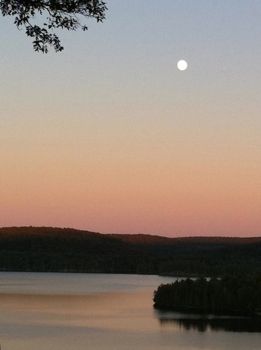 What’s the big deal about the Harvest Moon? Why are the full moons special in autumn? Around the time of the autumn equinox, the ecliptic – or the path of the sun, moon, and planets – makes a narrow angle with the horizon at sunset.

Every full moon rises around the time of sunset, and on average each successive moonrise comes about 50 minutes later daily. But, on September and October evenings – because of the narrow angle of the ecliptic to the horizon – the moon rises sooner than the average.

That fact was important to people in earlier times. For farmers bringing in the harvest, before the days of tractor lights, it meant there was no long period of darkness between sunset and moonrise for several days after full moon. And that meant farmers could work on in the fields, bringing in the crops by moonlight. Hence the name Harvest Moon.

At our mid-northern latitudes, watch for the Harvest Moon to shine from dusk until dawn for the next few to several days.