Waxing moon lights up Cancer the Crab on March 22

Use the moon to locate the constellation Cancer tonight, and in late March and early April, use key stars to star-hop to Cancer in a dark sky.

Cancer, the faintest constellation of the Zodiac, will be easy to locate but hard to see in tonight’s moonlit sky. As soon as darkness falls this Friday, March 22, look skyward for bright waxing gibbous moon. It shines in front the constellation Cancer the Crab tonight.

By the end of the month, the moon will drop out of the early evening sky. That will be the time to see the celestial crab in all its glory. The trick is to find the bright stars in the moon’s vicinity tonight and use them to locate Cancer in a dark sky. Cancer fills the section of sky between the Gemini stars Castor and Pollux, and Regulus, the brightest star in the constellation Leo the Lion.

By the way, the brightest star in the evening sky tonight is no star at all but the planet Jupiter. It’ll be high in the south to southwest sky at dusk and early evening as seen from mid-northern latitudes. (From the Southern Hemisphere, look for Jupiter in the northern sky at nightfall.)

Jupiter, the moon, the constellation Cancer and all the stars – as always – will move westward across the sky tonight. They do so for the same reason that the sun goes westward during the day. The Earth rotates eastward on its axis, making it appear as if these heavenly bodies are moving westward. But it’s really Earth that’s doing the moving.

Use the moon to locate the constellation Cancer tonight, and in late March and early April, use key stars to star-hop to Cancer in a dark sky.

Comet PANSTARRS fading but may still be visible through binoculars 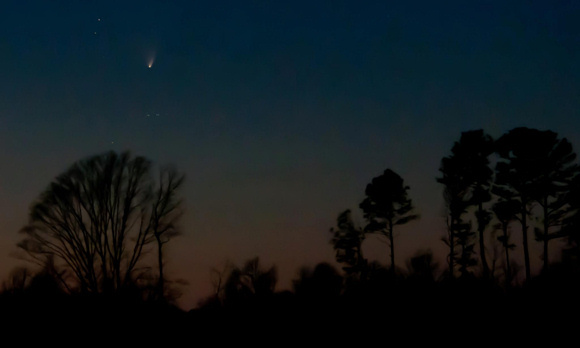 Photo of Comet PANSTARRS taken by Ken Christison from North Carolina in the deepening dusk on March 21, 2013. Thank you Ken! With binoculars you might still catch the comet over the west-northwest horizon some 60 to 80 minutes after sunset.