Enjoy the great sky show in the east before sunrise on March 17, 18, 19 and 20, 2020. The moon will appear as a thinner crescent each morning as it parades by the four morning planets: Jupiter, Mars, Saturn and Mercury.

Before sunrise on March 17, 18, 19 and 20 – the week of 2020’s early March equinox – look east! You’ll find the moon as a thinner crescent on each succeeding morning, and you’ll find the moon sweeping past four bright morning planets: first bright Jupiter and Mars, which are now very close together in the sky, then Saturn, then Mercury.

From around the world on the morning of March 17, the lit side of the lunar crescent points directly at this parade of planets. Be aware that Mercury rises in twilight. By the time Mercury ascends above your horizon, the glow of morning twilight might have washed fainter Saturn and Mars from view. Meanwhile, Jupiter and the moon will remain easily visible, even as the morning sky brightens.

On the morning of March 18, the moon will be closest to bright Jupiter and fainter, reddish Mars. Note how close together these two planets are now! Their conjunction comes on March 20 around 06:00 UTC. Mars will pass 0.7 degrees south of Jupiter (about the width of your little finger at arm’s length). These two planets are now in a single binocular field of view. After their conjunction, Jupiter will climb above Mars in the morning sky. Jupiter is now about 16 times brighter than Mars, the faintest visible morning planet. But Mars still shines as brilliantly as a 1st-magnitude star so it’s easy to see the red planet in Jupiter’s vicinity, assuming you have a dark sky. It might be hard to believe, but – by the time October 2020 comes rolling around – Mars will supplant Jupiter as the sky’s fourth-brightest celestial object. Read more: Why is Mars sometimes bright and sometimes faint?

On the morning of March 19 – the day of 2020’s early equinox, according to clocks in the Americas – the moon is closest to Saturn. Note Saturn’s golden color. It is the faintest of the bright planets to the eye, but a favorite among telescopic viewers.

On the morning of March 20, the moon will be a very thin crescent indeed. It’ll be what astronomers call an old moon, rising only shortly before the sun. Its lighted portion will be pointing to Mercury. Earthshine will likely be visible on the moon’s darkened portion. 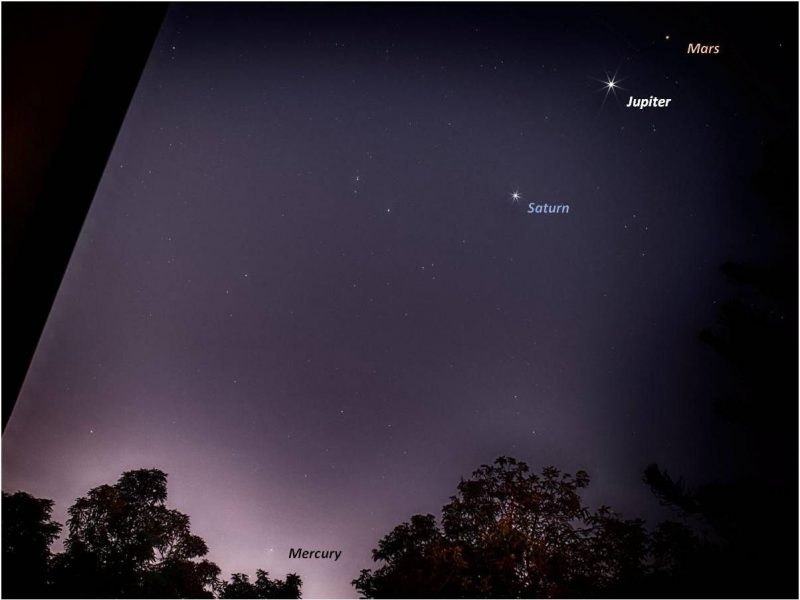 To view Jupiter and Mars close together – and Saturn nearby – try going outside before dawn begins to break, say about 1 1/2 hours before sunrise. Then the sky will be dark enough still for fainter Mars and Saturn to be visible.

An imaginary line drawn from Jupiter, the brightest morning planet, through Saturn and down to the horizon will show you Mercury’s rising spot on the eastern horizon. Note that Mercury will rise near the spot where the sun will rise.

Mercury is more easily viewed with the eye alone from the Southern Hemisphere and the northern tropics than at mid-northern latitudes in the Northern Hemisphere. At northerly latitudes, you might need binoculars to tease out Mercury from the glare of morning dawn.

The moon’s illuminated side points eastward (in the direction of sunrise). The moon travels in front of the constellations of the zodiac at the rate of about 1/2 degree (its own angular diameter) eastward per hour, or 13 degrees eastward per day (24 hours). Watch for yourself as the moon passes by these four morning planets in the mornings ahead.

The king planet Jupiter is by far the most brilliant planet in the morning sky and will remain so for months to come. In fact, Jupiter ranks as the fourth-brightest celestial body to light up the heavens, after the sun, moon and the planet Venus. But there’s no way to mistake Venus for Jupiter, or vice versa, right now. Venus lords over the evening sky while Jupiter rules the morning sky, and they will continue to do so for a couple more months.

Bottom line: Enjoy the great sky show in the east before sunrise on March 17, 18, 19 and 20, 2020. The moon will appear as a thinner crescent each morning as it parades by the four morning planets: Jupiter, Mars, Saturn and Mercury.