Enjoy the Venus-Jupiter conjunction in the predawn/dawn sky on January 22, 2019, as these two bright worlds meet each other at a near-maximum elongation from the rising sun.

Before sunrise on January 22, 2019, look eastward or in the general direction of sunrise to see the conjunction of the planets Venus and Jupiter in the predawn/dawn sky. At conjunction, these two brilliant worlds shine north and south of one another on the sky’s dome, with Jupiter passing 2.5 degrees south of Venus.

You simply can’t miss these two brilliant beauties, because Venus and Jupiter rank as the third-brightest and fourth-brightest celestial bodies, respectively, after the sun and moon! 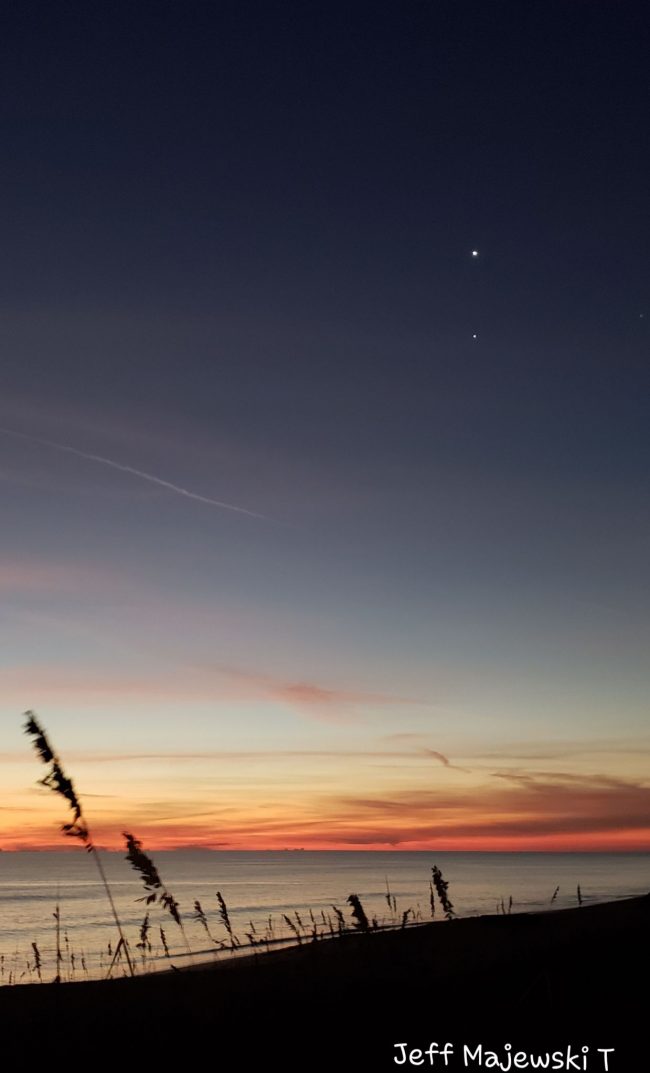 “Dawn at the beach,” wrote Jeff Majewski in Flagler Beach, Florida on January 19. Venus is above and brighter. Jupiter is slightly fainter, below. Jupiter will sweep up past Venus – so that the 2 brightest planets have a conjunction – on January 22. Jeff caught this image with a Samsung Galaxy S9+. Visit EarthSky Community Photos.

Of course, Venus and Jupiter are not actually close together in space. They just happen to reside along the same line of sight at conjunction. The king planet Jupiter is about 7 1/2 times Venus’ distance from Earth.

Click here if you’d like to know the present distances of the solar system planets from the Earth and sun in astronomical units. 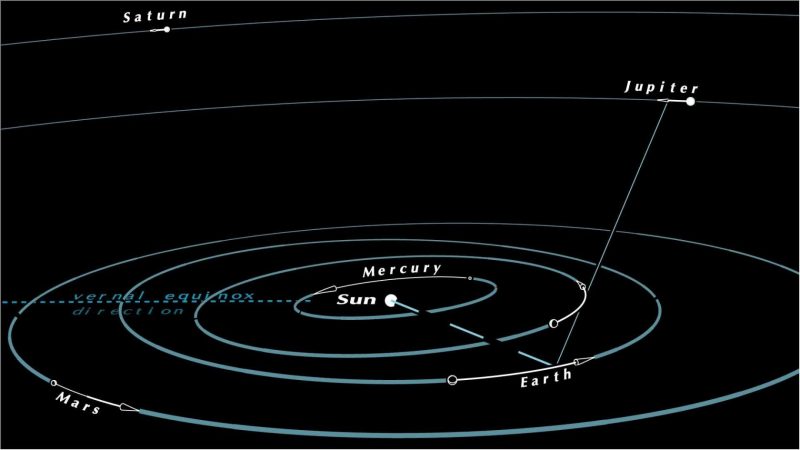 This illustration shows the heliocentric – sun-centered – view of Earth, Venus and Jupiter around the time of the January 22, 2019 Venus-Jupiter conjunction. Jupiter is an outer planet. Venus orbits one step inward from Earth. It’s from Guy Ottewell; visit his post on this conjunction.

After the conjunction of Venus and Jupiter on January 22, 2019, watch for Jupiter to climb upward and for Venus to sink downward in the morning sky. You simply can’t mistake Venus for Jupiter, or vice versa, because Venus is by far the brighter of these two brilliant worlds.

Amazingly enough, it looks as though very similar Venus-Jupiter conjunctions recur in periods of about 24 years plus one week. Looking backward and forward, we find this series of Venus/Jupiter conjunctions taking place on nearly the same spot upon the zodiac (near the star Antares), with Jupiter passing to the south of Venus.

Bottom line: Enjoy the Venus-Jupiter conjunction in the predawn/dawn sky on January 22, 2019, as these two bright worlds meet each other at a near-maximum elongation from the sun.