At nightfall on June 9, 10 and 11, use Venus to find the Gemini stars, Castor and Pollux, before their heliacal setting later this month. 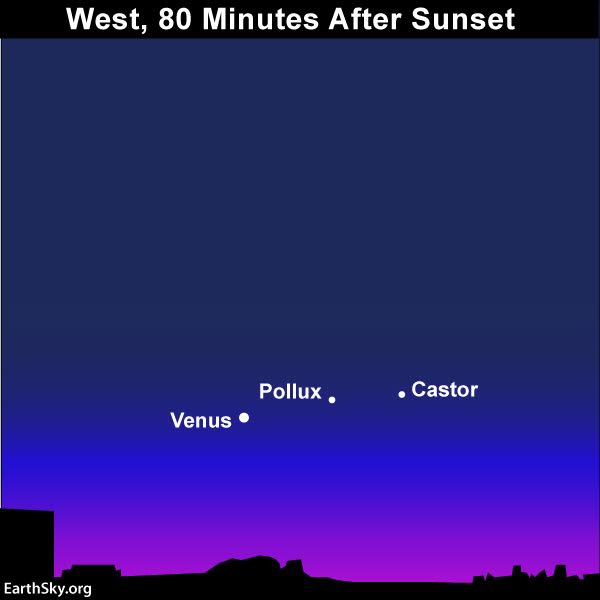 On June 9 to 11, 2018, look west after sunset to see the brightest planet Venus making a line with the Gemini stars, Castor and Pollux, on our sky’s dome.

So you’ll be looking in the sunset direction after the sun goes down. Venus (so bright!) will be the first “star” to pop out as night falls. Some people might see Venus as soon as 10 to 15 minutes after sunset (keen-eyed observers can spot it in a daytime sky), and of course you’ll see Venus the quickest if you scan for it with binoculars. The rest of us just need to wait. Never fear. If your sky is clear, you’ll easily see Venus.

Then, as dusk turn into darkness, look for the constellation Gemini’s two brightest stars, Castor and Pollux, to the north (or right) of Venus. Pollux rates as a 1st-magnitude star, or one of the brightest stars in our sky. Castor is slightly fainter, but also bright, the brightest of 2nd-magnitude stars. Yet both stars pale next to Venus, which outshines them by a hundredfold. 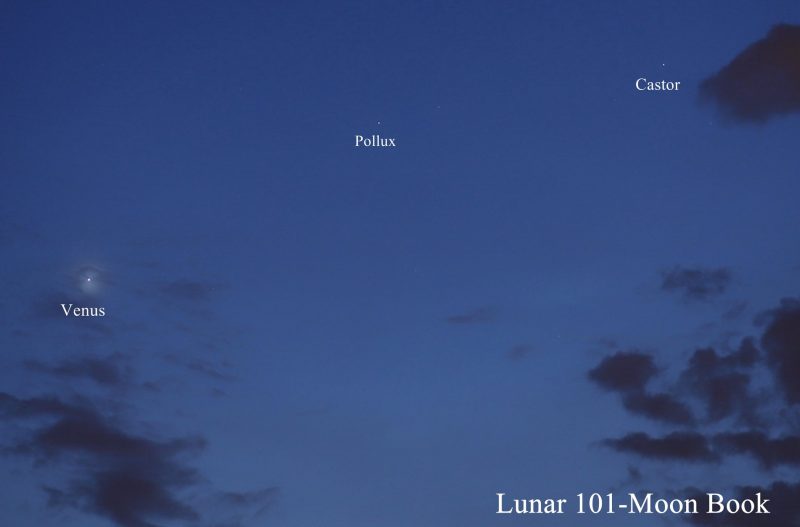 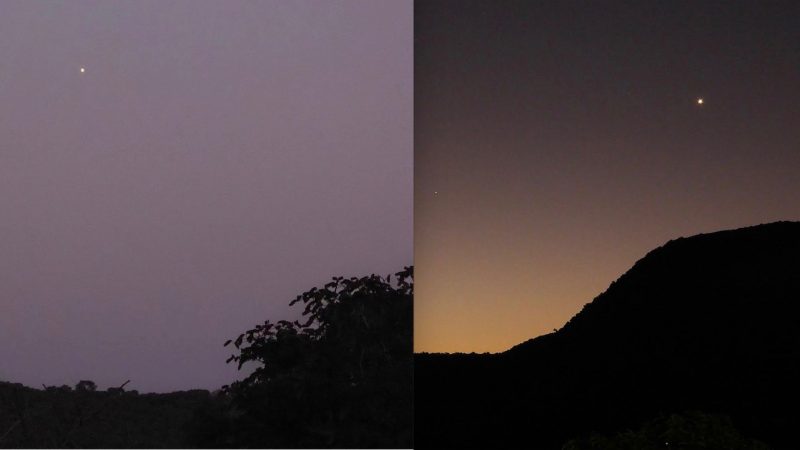 Got Venus? Quick! Turn around and look for Jupiter ascending in the east as night falls. It’s really fun to see the sky’s brightest planet (Venus) and 2nd-brightest planet (Jupiter) at the same time. As night passes, Venus will set, and Jupiter will ascend higher in the sky. Photos taken May 9, 2018, by Peter Lowenstein in Mutare, Zimbabwe.

Day by day, Venus is climbing away from the setting sun. But Castor and Pollux are sinking toward it, as they always do at this time of year. Venus is a planet in our solar system, and – remember – the word planet itself comes from an ancient root word meaning wanderer. Because they’re so much closer to us than the stars, planets move separately from the stars. Venus will remain in the evening sky until September or October 2018. But these Gemini stars will disappear in the solar glare later this month, drawn inexorably into the sunset by Earth’s own orbit around the sun, which is placing the sun between us and them. The exact date of their disappearance will vary, depending on where you live worldwide. It’d be fun to watch them each night, as long as you can!

The first day that a star disappears in the evening twilight is called a star’s heliacal setting. It’s similar to the more familiar term heliacal rising, which indicates when a star first becomes visible at morning dawn. The word heliacal, of course, just means related to the sun.

After its heliacal setting, a star is lost in the sun’s glare for some weeks or months, until it reappears in eastern morning twilight. All that time, Earth is moving along steadily in its orbit around the sun. It’s our movement around the sun that causes the stars to shift their positions across our sky, from one earthly season to another.

Thus coming to know even a few stars – being aware of their heliacal risings and settings – can place you in tune with nature on a grand and cosmic scale.

Bottom line: At nightfall on June 9, 10, and 11, 2018, notice the brightest planet Venus making a line with the Gemini stars, Castor and Pollux. Then watch for these stars’ heliacal setting later this month.