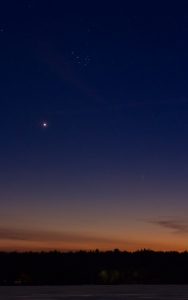 Post-processing Details
Minor elimination of a few cottage lights across the lake. Otherwise none.

Tell us about your image
Watching the sunset I realized Venus and Pleiades would be aligned and might make a nice photo. I wasn’t sure the exposure would be long enough to capture Pleiades. Turned out to be quite nice.

Thank you! Your submission has been received!
Oops! Something went wrong while submitting the form.
END_OF_DOCUMENT_TOKEN_TO_BE_REPLACED