Use the moon to locate the Crab on April 13

Cancer the Crab is famous, but faint. You likely won’t see it tonight, in the moon’s glare. But you’ll see bright stars around it, and they can guide you to Cancer when the moon moves away.

On April 13, 2019, the waxing gibbous moon can guide you to the location of the constellation Cancer the Crab on the sky’s dome. The night after – April 14, 2019 – you’ll find the moon closer to Regulus, the brightest star in the constellation Leo the Lion.

You’ve probably heard of Cancer, but it’s very faint. There’s a good chance you’ve never seen it. Cancer is well known not because it’s bright, but because the sun in its yearly journey passes directly in front of this constellation from about July 20 to August 9. So by definition, faint as it is, Cancer is a constellation of the zodiac.

In fact, as constellations go, Cancer the Crab may be the least seen among the zodiacal constellations. You won’t see it well in the moonlight, but don’t let that stop you from gazing at the moon these next few nights and using it to help locate Cancer, even if the moonlight makes it hard to see right now.

Just look above at our chart. Notice that Regulus, the brightest star in the constellation Leo the Lion, shines on one side of Cancer, while the Gemini stars, Castor and Pollux, shine on the other side. Take note of the position of these three “fixed” stars relative to the moon. Come back again in a night or two, and see if you can find them again. Then, on a dark night, when the moon has dropped out of the evening sky, use Regulus, Castor and Pollux to locate Cancer the Crab.

Here’s a more detailed chart of the stars in and around Cancer: 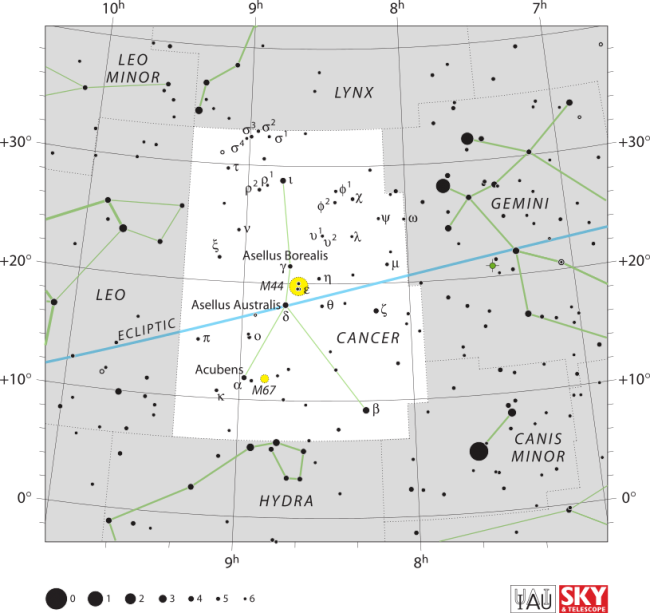 The constellation Cancer, with its famous Beehive star cluster (M44). On a dark night, look for the Beehive to make a triangle with the Gemini stars, Castor and Pollux, and the bright star Procyon in the constellation Canis Minor. Image via IAU.

If you treat yourself to a trip to a country location, where city lights don’t interfere – you’ll find this constellation. Just remember, Cancer’s brightest star is magnitude 3.5, meaning that none of Cancer’s stars can be seen from light-polluted cities or suburbs. Starting around April 21, 2019 – or so – the moon will have dropped out of the early evening sky, and you’ll be able to identify Cancer. Cancer faithfully glimmers between Regulus and the two bright Gemini stars, Castor and Pollux.

And, if you do see Cancer on a moonless night, you’ll have a wonderful surprise in store, especially if you’re looking in a dark sky away from city lights. In a dark sky, if your eyesight is good, you can make out a patch of haze in the midst of Cancer’s stars. If you have binoculars, you’ll more clearly see a cluster of stars within Cancer, called Praesepe – also known as the open star cluster Messier 44 – most frequently called the Beehive. 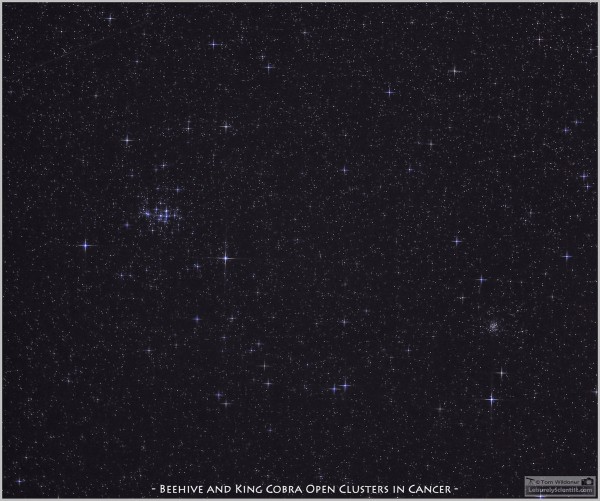 The cluster of stars on the left in this image is the Beehive, within the constellation Cancer the Crab. You can also see the King Cobra cluster here, on the right of the image. Image via Tom Wildoner at LeisurelyScience.com.

Bottom line: Cancer the Crab is famous, but faint. You likely won’t see it tonight, in the moon’s glare. But you’ll see bright stars around it, and they can guide you to Cancer when the moon moves away.