Use the moon to find red Mars and red Antares before dawn on January 19, 20 and 21, 2020. Then, after Mars and Antares have faded from view, but before the sun comes up, try to catch the king planet Jupiter near the sunrise horizon.

Before dawn on January 19, 20 and 21, 2020, look for the waning crescent moon in the neighborhood of the red planet Mars and a red star, Antares in the constellation Scorpius the Scorpion. If you wait until dawn breaks – possibly until both Mars and Antares disappear from the dome of the sky – you might see another planet, too, bright Jupiter. See the chart below.

Mars is only modestly-bright right now; 1st-magnitude Antares is brighter. But Mars is getting brighter. It will reach Antares’ brightness by early March 2020. By the time that October 2020 comes rolling around, Mars will be a good 40 times brighter than it is now. In fact, in October 2020, Mars will become the 4th-brightest celestial body to light up the heavens, after the sun, moon and the planet Venus.

The name Antares (Ant-Ares) means rival to Ares. Ares was the Greek name for the Roman war god Mars. And indeed Mars and Antares are rivals of sorts in our sky. Both the star and the planet look red, and Mars often gets brighter than Antares, as it will in 2020.

On January 19, 2020, note that the lit side of the waning crescent moon points right at Mars and Antares. On the following morning – January 20, 2020 – the view is even prettier. On that morning, the moon – in its eastward trek in front of the backdrop stars – will be swinging to the north of the planet Mars. Note that – between January 19 and 20 – the moon will have moved some 13 degrees or 26 moon diameters closer to Mars and Antares. This motion of the moon on our sky’s dome reflects the moon’s actual motion in orbit around Earth.

During the moon’s monthly trip in front of the constellations of the zodiac, the moon regularly passes Mars and Antares every month.

Click on Heavens-Above Moon for a chart showing which constellation is presently behind the moon.

Click on Heavens-Above Planets to for a table showing which constellations are presently behind Mars and the other planets.

Like the moon, the planet Mars also travels in front of the constellations of the zodiac, but at a much slower pace. Whereas the moon goes full circle in about four weeks, Mars takes nearly two Earth-years to complete one trip through the zodiac. At present, Mars is sweeping to the north of Antares, and will be noticeably east of Antares by the month’s end.

Now let’s talk about the giant planet Jupiter, which is now returning to the east before sunup … 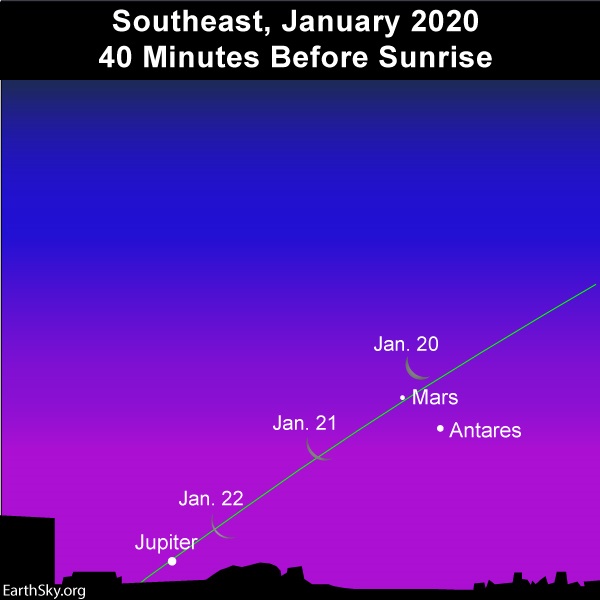 By the time Jupiter rises, Mars and Antares may well have faded from view. Mars is fainter than Jupiter now. But Mars will be brighter than Jupiter soon. For now, watch for Jupiter over the eastern sunrise horizon. If you’re able to spot it, you’ll get a thrill! It’ll be especially easy to spot Jupiter on the mornings of January 21 and 22, when the moon’s lighted portion will point toward it. Read more.

Sharp-eyed folks might be able to see Jupiter in the haze of twilight shortly before sunrise. See sky chart above.

Others may need binoculars to view Jupiter right now, as the king planet must compete with the glare of the coming sunrise. But Jupiter is bright. It’s normally the second-brightest planet, after Venus. So you might be able to pick it out with the eye, and, if so, it’ll delight you to find this bright object so deeply buried in morning twilight.

By the end of this month, or early February 2020, it should be fairly easy to catch Jupiter near the sunrise horizon with the eye alone, as the predawn darkness is giving way to dawn. When will you first see it? Watch for Jupiter!

By the way, be sure to circle March 20, 2020, on your calendar. That’s when Mars and Jupiter will meet up for a close-knit conjunction in the morning sky. It’ll be a good one!

Bottom line: Use the moon to find red Mars and red Antares before dawn on January 19, 20 and 21, 2020. Then, after Mars and Antares have faded from view, but before the sun comes up, try to catch the king planet Jupiter near the sunrise horizon.