Moon and star Antares on August 28

Tonight – August 28, 2017 – let the moon be your guide to the red star Antares. The humongous size of this red supergiant star is truly difficult to fathom! 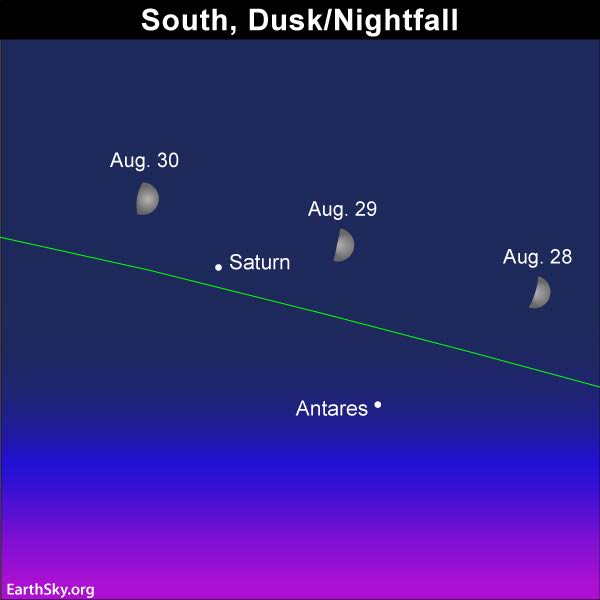 Tonight – August 28, 2017 – let the moon introduce you to Antares. It’s a red star and the brightest star in the constellation Scorpius the Scorpion. Look first for the moon, and the nearby bright star will be Antares. The other bright starlike object making a triangle with the moon and Antares tonight will be Saturn, 6th planet outward from the sun in our own solar system.

You can distinguish Antares from Saturn by color. Antares, the heart of the Scorpion, glows red while Saturn displays a golden color. If you have difficulty discerning color with the eye alone, try your luck with binoculars.

If Antares replaced the sun in our solar system, its circumference would extend beyond the orbit of the fourth planet, Mars. In this illustration, Antares is shown in contrast to another star, Arcturus, and our sun. Image via Wikimedia Commons.

Just how large is this incredible star? It’s not known with absolute certainty, but its radius is thought to be about 3 times the Earth’s distance from the sun (3 astronomical units). That’s about 3/5th the way from the sun to the orbit of Jupiter, the 5th planet outward from the sun. The radius of Antares is the equivalent of approximately 650 solar radii. 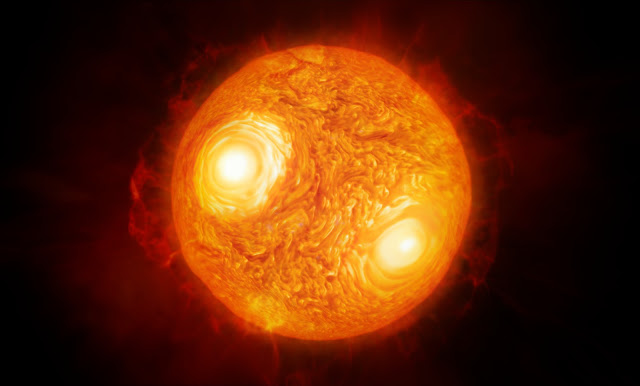 Bottom line: Tonight – August 28 – let the moon be your guide to Antares, a red supergiant star whose humongous size is truly difficult to fathom!