The brilliant planets Jupiter and Venus – and fainter Saturn, which is also closer to the sunrise horizon – will all be passed by the moon in late January and early February, 2019.

Starting around January 30, 2019 – and through the morning of February 1 and possibly even February 2 – watch the slender waning crescent moon slide by the planets Jupiter, Venus and then Saturn.

On January 30, the moon rises first, followed by Jupiter, then Venus and then Saturn. Given clear skies and an unobstructed horizon in the direction of sunrise, it’ll be easy to catch the moon, Venus and Jupiter. These worlds rank as the second-brightest, third-brightest and fourth-brightest celestial bodies to light up the heavens, respectively, after the sun. 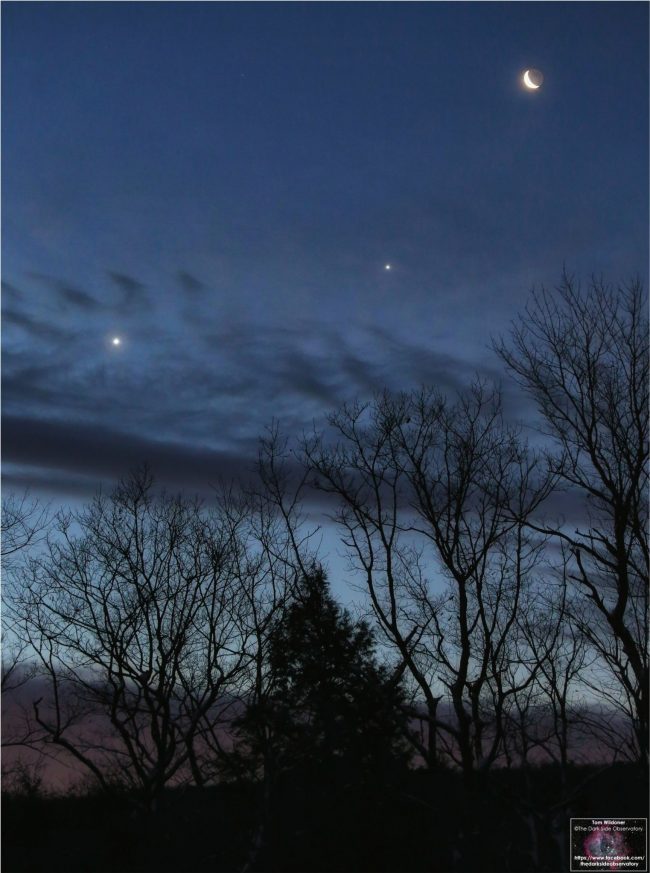 View larger at EarthSky Community Photos. | Our friend Tom Wildoner caught the moon and planets on January 30, 2019. Thank you, Tom! 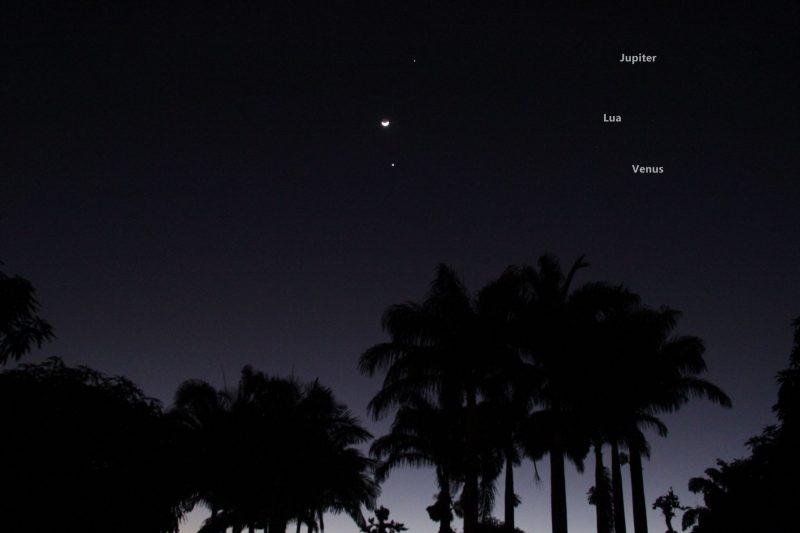 View larger at EarthSky Community Photos. | Roosevelt Silva in Brazil captured the moon and morning planets Venus and Jupiter on January 31, 2019. From the Southern Hemisphere, the view is essentially the same as in the Northern Hemisphere, but the orientation of the planets and moon with respect to the horizon is different.

Saturn is just now returning to the east before dawn, to begin its yearly trek across Earth’s skies. It’s not very prominent yet, and you might encounter haze or other murk near the horizon.

Thus Saturn will present more of a challenge, sitting, as it does, much closer to the sunrise horizon, with its luster tarnished by the glow of morning dawn. Although Saturn will be nowhere near as bright as the moon, Venus or Jupiter, the ringed planet nonetheless now shines as brightly as a 1st-magnitude star.

On any of these mornings, draw an imaginary line between Venus and Jupiter to spot Saturn near the horizon an hour or so before sunrise. That imaginary line will continue to work for you for a while, even after the moon has disappeared into the sunrise glare.

If you can’t catch Saturn with the eye alone, try your luck with binoculars.

Want to know when the moon and planets rise into your sky? Click here if you live in the U.S. or Canada. 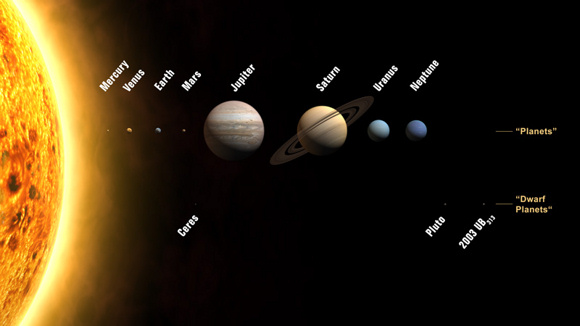 The planets of the solar system are scaled by size but not distance. Click here to find out planetary distances in astronomical units. Image via International Astronomical Union.

Note that – day by day – the moon shifts eastward (in the direction of sunrise). The lit side of the waning moon always points in the moon’s direction of travel in front of the stars and planets of the zodiac. In other words, the daily change of the moon’s position relative to the backdrop stars reveals how far the moon has traveled in its orbit around Earth.

In the time frame of one month, the moon swings through all the constellations of the zodiac and sweeps by every planet of the solar system. The moon does not actually come close to any of these planets, however. For a day or two each month, the moon and a particular planet more or less align on the sky’s dome, but are not truly close together in space. Click here to know the present distance of the moon (in Earth-radii) from Earth and the present distances of the planets (in astronomical units) from Earth. Incidentally, one astronomical unit = 23,455 Earth-radii.

Now and again, the moon occults – passes directly in front of – a bright star or solar system planet. The moon will occult Venus on January 31, 2019. Click here for more about the Venus occultation, and remember that all the occultation times are in Universal Time (UTC). 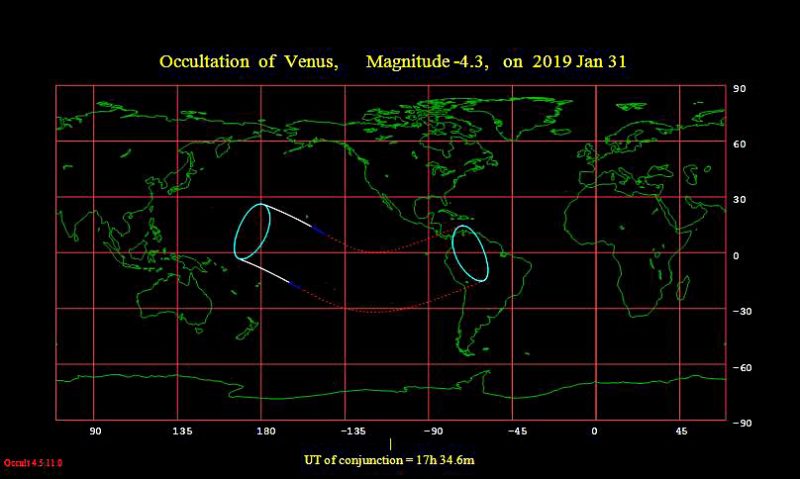 For the most part, the lunar occultation of Venus takes place over the Pacific Ocean. The red dotted line depicts where the occultation occurs in daytime, blue at twilight and white in a dark sky. Worldwide map via IOTA.

The moon will occult Saturn on February 2, 2019; click here for more about the Saturn occultation.

Note that you have to be at just the right place on Earth to witness either occultation. 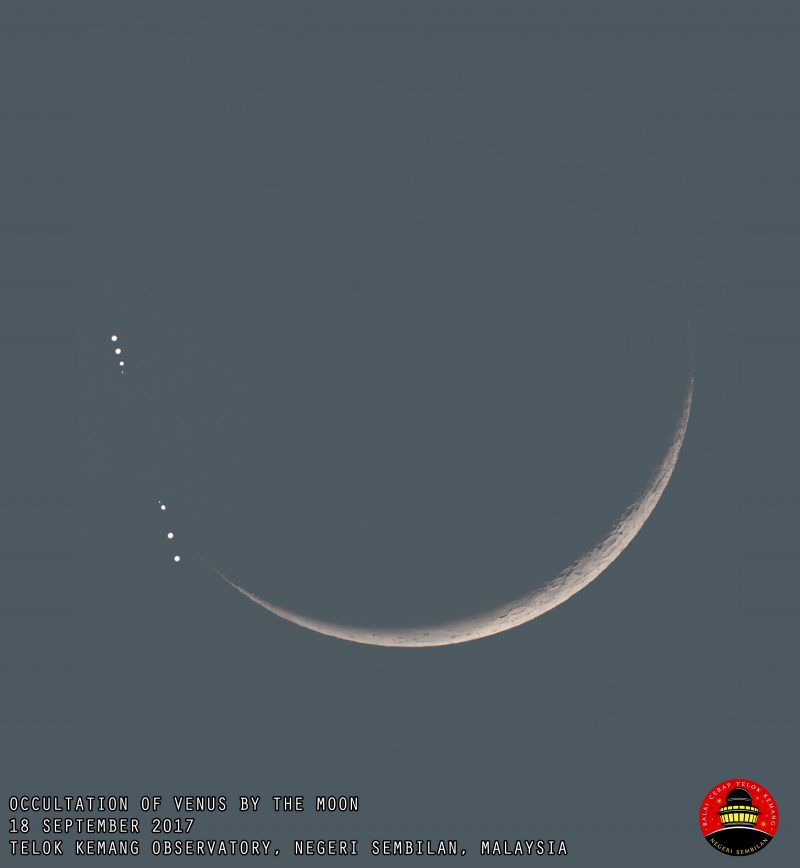 Bottom line: No matter where you live on Earth, let the slender waning crescent moon guide your eye to Jupiter and Venus (and possibly Saturn) before sunup in late January and early February 2019.