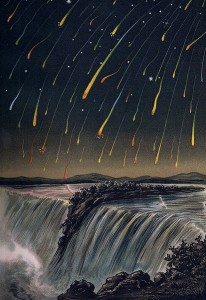 Leonid meteor storm, as seen over North America on the night of November 12-13, 1833. This woodcut was published in 1888 by E. Weib in his Bilderatlas der Sternenwelt (Illustrated Atlas of the Stars). Image Credit: Wikimedia Commons.

Thank you! Your submission has been received!
Oops! Something went wrong while submitting the form.
END_OF_DOCUMENT_TOKEN_TO_BE_REPLACED