Don’t miss the moon’s sweep past dazzling Venus and much fainter Mars, east before sunup. Lovely to view, and you might get a sense of the moon in orbit. 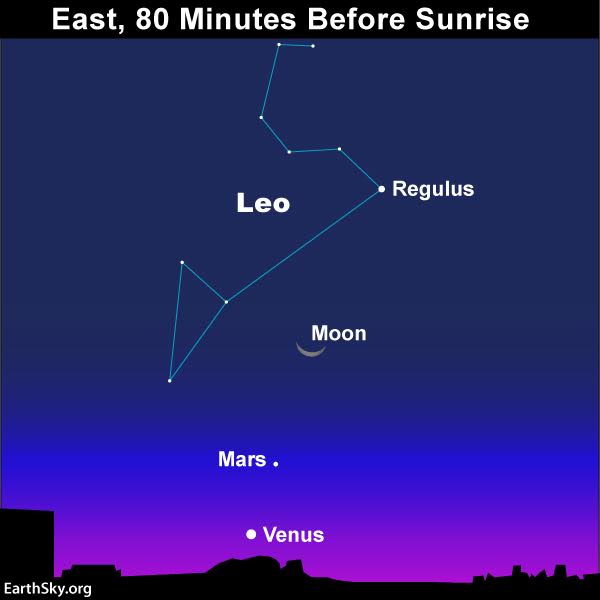 On the mornings of October 16 and 17, 2017, rise before the sun to view the moon and dazzling planet Venus in the eastern morning sky. Mars will be there, too, but much fainter than either Venus or the moon, which rank as the second-brightest and third-brightest worlds in our sky. Some sharp-sighted sky gazers might even see the moon and Venus after sunrise. And if you have a really good, unobstructed eastern horizon, you might also catch the moon on October 18.

On all of these dates, Mars will be a challenge to see, especially from cities, so faint and so near the sunrise.

To catch the red planet Mars – faint now because it’s far across the solar system from Earth – you’ll probably need to be up before dawn, say, 90 minutes or so before sunrise. On the morning of October 16, look for Mars beneath the moon and above Venus as seen from around the world. See our chart above for alternate dates.

Click here for some recommended almanacs to find out the the rising time of the moon, Mars and Venus in your sky.

The bow of the waning crescent points in the direction of sunrise, and the moon’s direction of travel through the constellations of the zodiac. As the moon moves in its orbit, you’ll be able to see it sweep by Mars and Venus in the next few days. Then it’ll be too close to the sun to be seen, not visible in the morning sky. The moon will turn new on October 19, 2017, and, at that time, it’ll officially transition out of the morning sky and into the evening sky.

If your sky is dark, also look for the famous “backwards question mark” pattern in the constellation Leo the Lion, above the planets Mars and Venus, in the east before sunup.

Autumn mornings free of bright moonlight are the best time to search for the zodiacal light, sometimes called false dawn. Since it follows the path of the zodiac – same path as that traveled by the sun, moon and planets, you can look for this cone of light to jut upward from the eastern horizon in the direction of the planets Venus and Mars, plus the star Regulus.

To see the zodiacal light, you’ll need to be watch before the light of the true dawn begins to break. Try watching a couple of hours before sunrise. It’ll look like a hazy pyramid of light, even “milkier” in appearance than the Milky Way.

What is the zodiacal light? It’s simply sunlight reflecting off dust grains that move in the plane of our solar system. Very beautiful to see! But you need a dark sky. 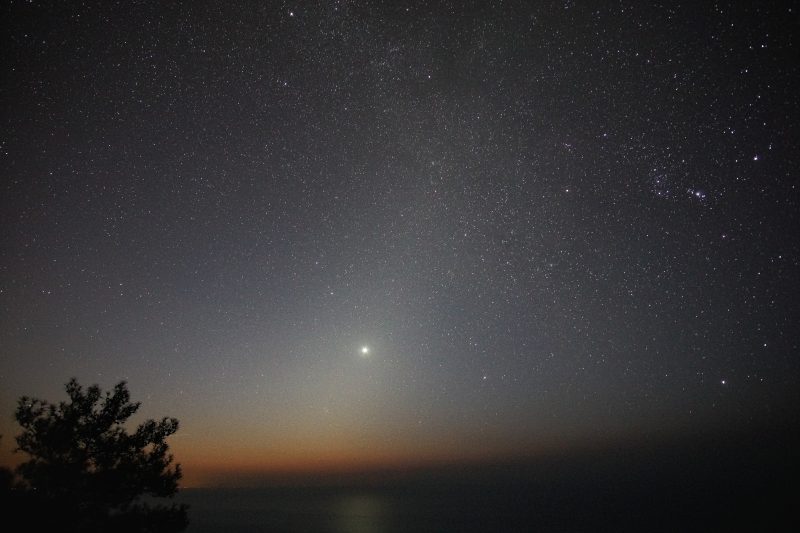 Talay Daniel Erol caught this image of bright Venus before dawn – in the midst of the zodiacal light – from Adrasan Antalya, Turkey.

Bottom line: On October 16 and 17, 2017, let the moon serve as your guide to the planets Venus and Mars. Look east before sunup.