Get an eyeful of the beautiful early morning scene as the moon joins up with Venus (and Mercury) in late March and early April 2019.

Late April and early May 2019 present the moon and the planet Venus adorning the eastern sky before sunrise. From most places worldwide, these two brilliant worlds can be viewed at dawn if you’re blessed with clear skies and an unobstructed horizon. After all, the moon and Venus rank as the second-brightest and third-brightest celestial bodies, respectively, after the sun. Unfortunately for far-northern latitudes, like Alaska, viewing the moon and Venus will be extremely difficult because the moon and Venus rise about the same time as the sun at those latitudes.

Elsewhere around the world, the moon rises first with the illuminated side of the moon pointing at Venus on April 30. The lit side of the waning crescent moon also points in the moon’s direction of travel relative to the stars and planets of the zodiac. So you’ll see a thinner crescent closer to Venus before sunrise on May 1 than on April 30. From mid-northern latitudes, you might not see the moon (even with binoculars) before sunrise on May 2. 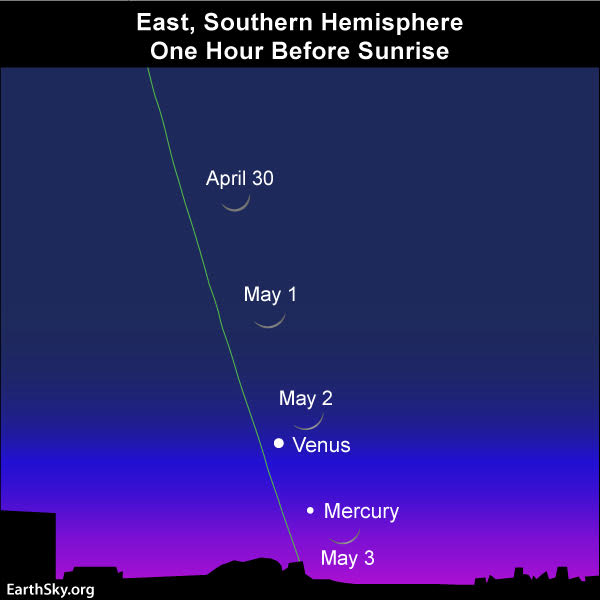 The Southern Hemisphere has the advantage for catching the moon, Venus and Mercury in the coming mornings, because, from there, they appear more directly above the sunrise.

At the equator (0 degrees latitude), Venus rises about 1 2/3 hours before the sun, and Mercury comes up around 1 1/4 hours before.

From 40 degrees north latitude, Venus rises about one hour before the sun, and Mercury comes up less than 40 minutes before.

Although Venus and Mercury have the same elongation (or angular distance) from the sun worldwide, we can attribute the great difference in the planets’ rising times between the Northern and Southern Hemispheres to the tilt of the ecliptic – the pathway of the sun, moon and planets in front of the constellations of the zodiac.

In short, an early spring sunrise finds the ecliptic making a narrow angle with the horizon, whereas an early autumn sunrise finds the ecliptic intersecting the horizon pretty much straight up and down. April is a springtime month for the Northern Hemisphere, yet an autumn month for the Southern Hemisphere. Therefore, the morning planets are found more to the side of the sun, instead of above it, at northerly latitudes, but more above the sun at southerly latitudes. 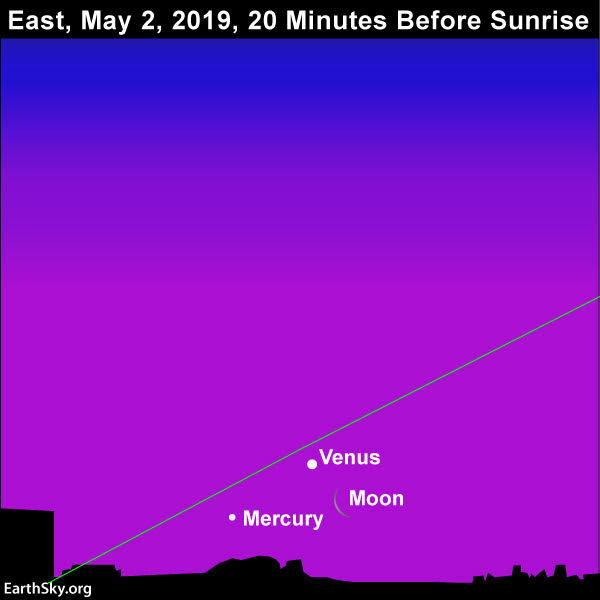 It’ll be quite a challenge to spot the moon and Mercury beneath Venus on May 2 from northerly latitudes!

Bottom line: Get an eyeful of the beautiful early morning scene as the moon joins up with Venus (and Mercury) in late April and early May 2019.