On March 28 and 29 – and even some evenings after that – see the waxing crescent moon and the planet Venus in the evening sky. They’re beautiful! And you can use them to find the constellation Taurus the Bull.

On March 28 and 29, 2020, the waxing crescent moon and dazzling planet Venus will pop out almost immediately after sunset, lighting up the western evening twilight. Given clear skies, they’ll be hard to miss! You can use the moon and Venus on these evenings to locate the constellation Taurus the Bull, with its brightest star Aldebaran and the famous Pleiades star cluster, also known as the Seven Sisters.

Unlike the stars, which shine by their own light, the moon and Venus shine by reflecting the light of the sun. They are literally heavenly bodies basking in sunshine. 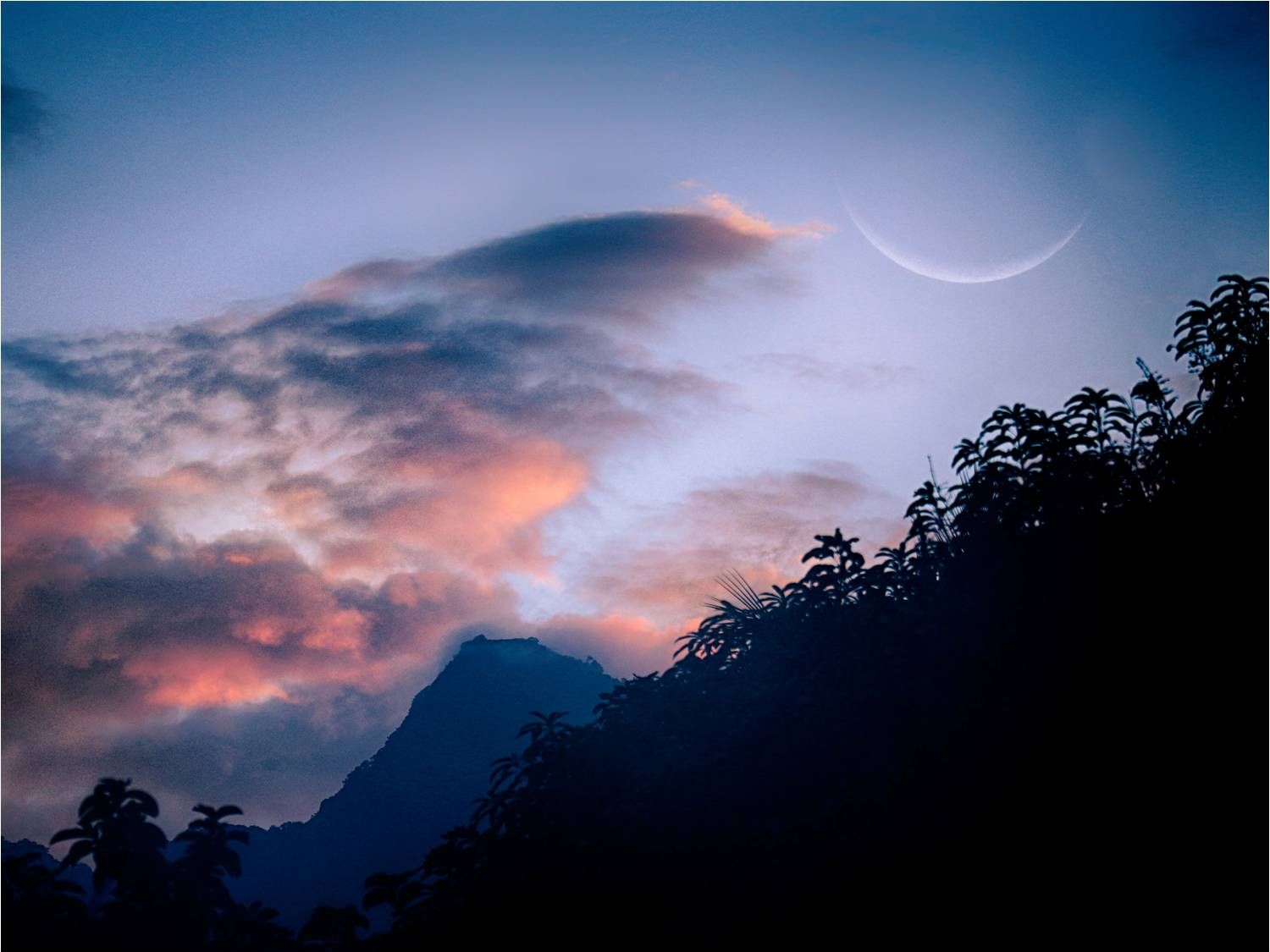 View at EarthSky Community Photos. | Dr Ski in Valencia, Philippines, created this beautiful composite photo of the moon from images captured on March 27, 2020. He wrote: “A wise man once told me that Nature’s beauty, indeed life itself, was made to be embellished. In that light, I decided to capture 2 nice images taken at different focal lengths and present them as one. I’m trying to convey my feeling of wonder and awe as I was enjoying the western view from the Observatory. Being confined in an Observatory is not so bad.” Thank you, Dr Ski!

The Pleiades cluster looks like a tiny dipper. It’s more dipper-like, some think, than the famous Big Dipper asterism, now in the northeast in the evening. Although the Pleiades are also called the Seven Sisters, most people see six stars here. Binoculars show more stars in the Pleiades, and a telescope reveals that this tiny pattern within Taurus is an actual open cluster of several hundred stars.

The star Aldebaran depicts Taurus the Bull’s ruddy eye, and highlights a V-shaped assemblage of stars that outlines the Bull’s face. These stars (with the exception of Aldebaran) make up another open star cluster, called the Hyades. Like the stars in the Pleiades, the Hyades stars are siblings, born from a single cloud of gas and dust. Aldebaran, at a distance of 65 light-years, just happens to be on the same line of sight as this cluster. The Hyades cluster resides well over twice Aldebaran’s distance, at a distance of 150 light-years. 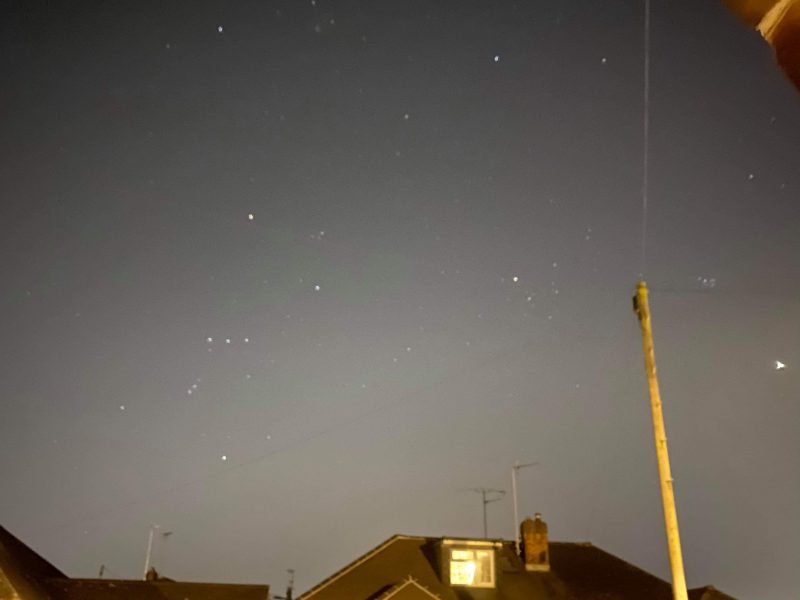 View at EarthSky Community Photos. | Vic Pablo in Luton, Bedfordshire, U.K., caught Venus (brightest object in image, to the right of the pole), and the constellations Orion and Taurus on March 26, 2020. He wrote: “Facing west an image of Orion constellation on top of the roof. Also visible is Venus and Pleiades on the right side of the wooden post. Aldebaran, Capella and Pollux which is part of Winter Circle is on the background.” Thank you, Vic! 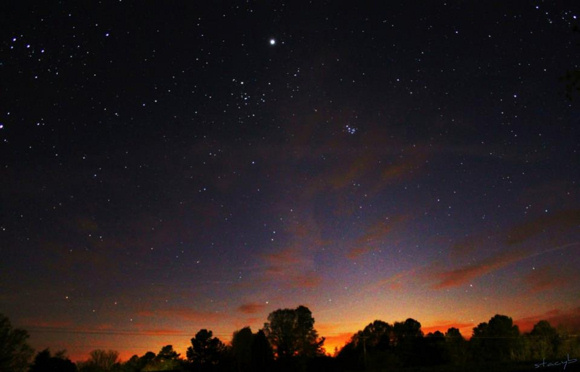 Photo of the planet Jupiter and the constellation Taurus by Stacy Oliver Bryant on April 6, 2013. Note the three stars of Orion’s Belt at upper left. Orion’s Belt always points to the star Aldebaran and the Pleiades star cluster

The 3 stars at the midsection of Orion – called the Belt of Orion – always point to the bright red star Aldebaran, in the V-shaped face of Taurus the Bull. Chart via IAU.

The lit side of the waxing crescent points westward, or in the direction of sunset. Although the moon appears to travel westward (in the sunset direction) every day, this is not the moon’s true motion. The moon, planets and stars appear to travel westward across the sky for the same reason that the sun appears to travel westward during the day. The Earth spins from west to east on its rotational axis every day, making it appear as if the sun, moon, planets and stars actually move from east to west daily. But it’s really the rotating Earth that is doing the moving.

However, the dark side of the waxing moon points in the moon’s direction of travel relative to the stars and planets of the zodiac. The moon moves in front of the background stars at the rate of about 1/2 degree per hour or about 13 degrees eastward per day. At the same time for these next several evenings, note the moon’s change of position relative to the “fixed” star, Aldebaran. This is the true measure of the moon’s orbital motion around Earth. Watch for the moon to traverse eastward through the constellation Taurus the Bull these next several days.

Venus was farthest from the sun on the sky’s dome on March 24. It’s now a glorious, dazzling sight in the western twilight. This week, watch as Venus sweeps closer to the lovely Pleiades star cluster. Venus will pass a scant 0.3 degrees south of the Pleiades on April 3 and a whopping 10 degrees north of the bright star Aldebaran in mid-April. Clouded out this week? The Virtual Telescope Project in Rome will be offering an online view of Venus and the moon. See their poster below.

Since it’s past its March 24 greatest elongation, Venus is now moving westward relative to the sunset, but eastward relative to the backdrop stars of the zodiac, at a slower pace than the moon. Starting on May 13, 2020, Venus will move in retrograde, or westward in front of the backdrop stars. The retrograde will end on June 24, 2020 (at which juncture, Venus will be in the morning sky). 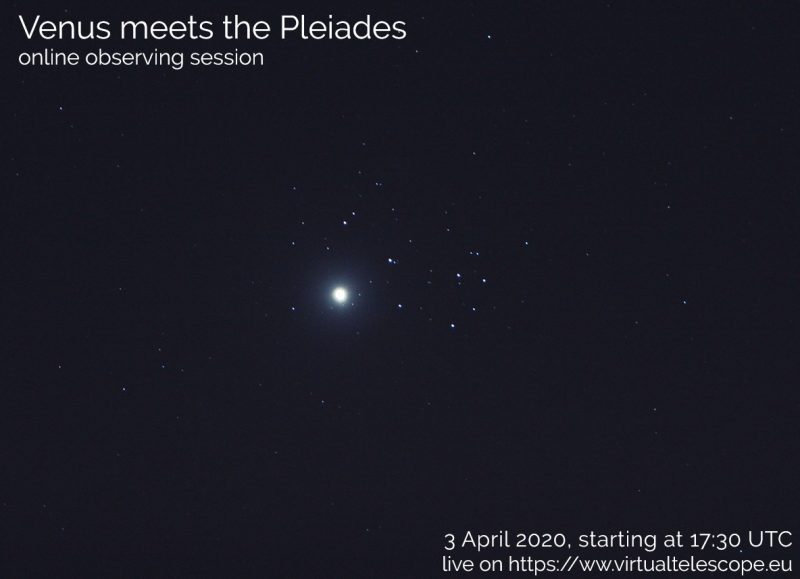 Gianluca Masi of the Virtual Telescope wrote: “In the coming week week, the sky will offer us something unique, coming back every 8 years only: a stunning conjunction, involving planet Venus, the brightest object up there these evenings and the wonderful Pleiades, a spectacular star cluster, one of the best gems of the deep sky. To bring some joy from this cosmic show to people worldwide, often quarantined to limit the dissemination of Covid-19, the Virtual Telescope will share this celestial treasure with everyone, offering a live view covering the climax of this cosmic hug between Venus and the Pleiades.” Read more about this April 3 online event. And notice the times are in UTC; here’s how to translate UTC to your time. 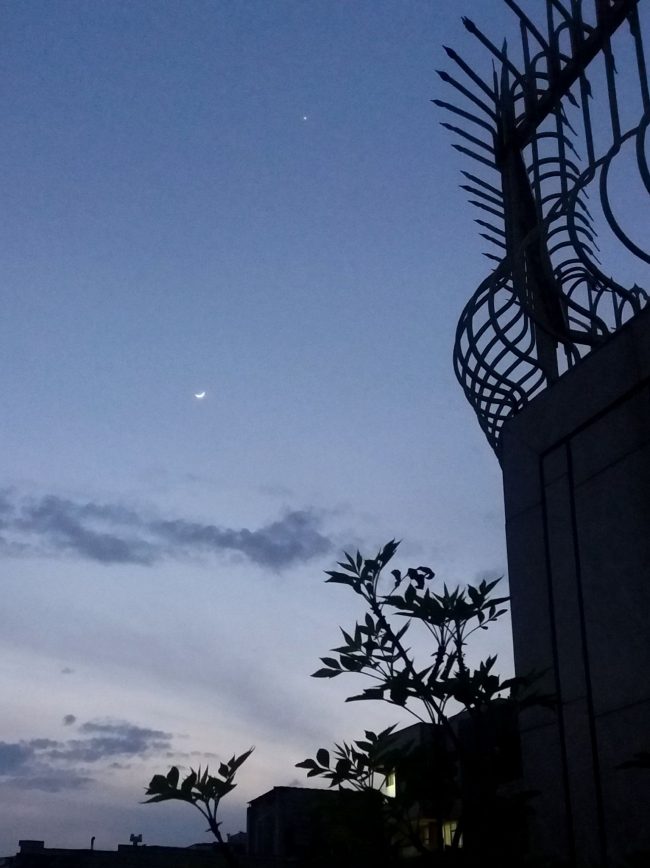 View at EarthSky Community Photos. | Hassan Dadashi.arani in Esfahan, Iran, caught the moon and Venus on March 27, 2020. Thank you, Hassan!

Bottom line: Watch for the brilliant evening couple – the moon and Venus – to adorn the evening sky on March 28 and 29, 2020.