They’re the sky’s 2 brightest objects after the sun, and they’re near each other Monday and Tuesday mornings. 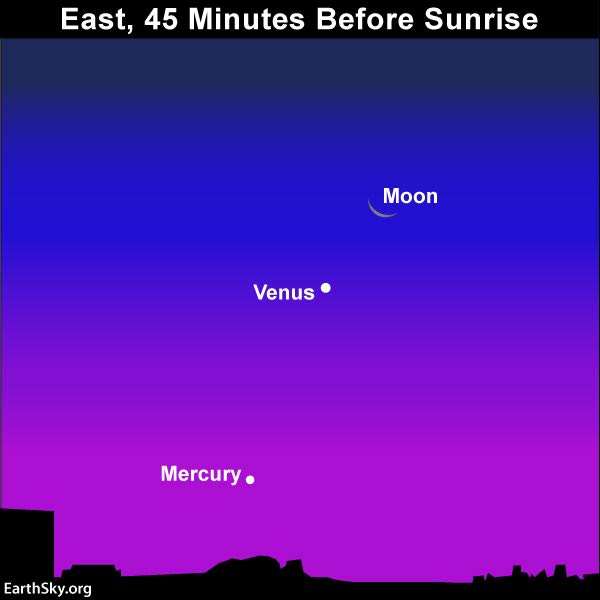 Before dawn in the next two mornings – September 17 and 18, 2017 – the waning crescent moon and dazzling planet Venus pair up in the east before sunrise. Given clear skies, it’ll be hard to miss them. The moon and Venus rank as the second-brightest and third-brightest celestial bodies, respectively, after the sun.

Some sharped-eye people might even see the moon and Venus after sunrise.

If you get up before dawn, or about 120 to 90 minutes before the sun, you should have little trouble spotting the star Regulus a short hop below Venus. Although Regulus is a 1st-magnitude star, it pales next to Venus, which outshines this star by a good hundredfold. Watch for Venus to pass about 0.5o of Regulus on the mornings of September 19 and 20. For reference, 0.5o is the equivalent of one moon diameter.

Given an unobstructed horizon in the direction of sunrise, people in the Northern Hemisphere also have a good chance of spotting the planet Mercury, the solar system’s innermost planet, near the sunrise point on the horizon. As the predawn darkness is first giving way to dawn, look for Mercury more or less on line with the moon and Venus. Mercury is quite bright – some 8 times brighter than Regulus – so it may be visible even after Regulus fades. Binoculars always come in handy for your Mercury search, especially if the view is murky near your horizon.

A third planet, red Mars, is also up before the sun. It lodges very close to Mercury on the sky’s dome, but is considerably fainter than Mercury. In fact, Mercury outshines Mars by about 12 times. We’ve been seeing photos of the pair, so telephoto lenses are catching them. Lacking a camera, you might also try your binoculars. They might let you to see Mars, and, if so, Mars and Mercury may well be in the same binocular field of view.

Click here for recommended almanacs. An almanac can help you find the rising times of the sun, moon and planets in your sky.

By the way, if you live in Indonesia, Australia or New Zealand, the moon will occult (cover over) Venus during the daylight hours on September 18.

Click here for more information about the occultation of Venus. 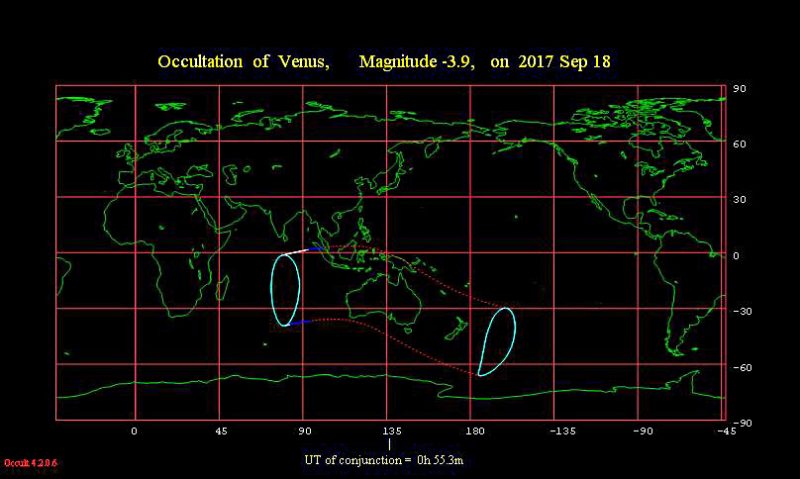 Here’s who will see the daylight occultation of Venus on September 18, 2017. Click here for more info.

Bottom line: The moon and Venus will be spectacular on the mornings of September 17 and 18, 2017. Given clear skies and an unobstructed eastern horizon, you might also catch Mercury and Mars below the moon and Venus. Good luck!