Agogee means ‘farthest from Earth.’ This most-distant moon of October, 2017 lingers near Saturn on the sky’s dome. 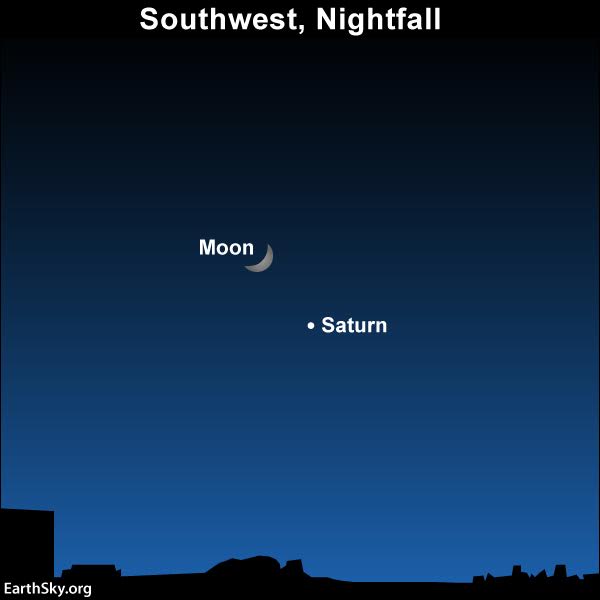 Tonight – October 24, 2017 – the moon is still near Saturn, and it’s this month’s apogee moon, that is, a moon at its most distant from Earth for this month.

The reason for the moon’s varying distance is that the moon’s orbit around Earth isn’t perfectly circular. Rather, the moon’s orbit is an ellipse (“squashed” circle) with our planet Earth residing at one of the two foci of the ellipse. 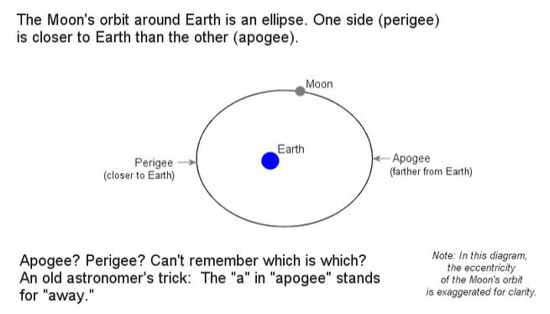 The moon’s orbit is nowhere this eccentric, as its orbit is closer to circular than depicted in the diagram. The exaggeration makes it easier to distinguish apogee from perigee.

On the other hand, when the moon’s orbital eccentricity increases to a maximum (most “flattened”), it’s the direct opposite. The perigee comes closer to Earth than the mean perigee; and the apogee resides farther away than mean apogee.

The moon’s mean eccentricity equals 0.055, but its actual value varies from 0.026 (least eccentric) to 0.077 (most eccentric). For the next couple of months, the moon’s orbital eccentricity will be increasing, resulting in more distant apogees and closer perigees:

Then the greatest extreme is reached during the following lunar apogee and lunar perigee:

Bottom line: Watch the moon this evening, on October 24, as the evening crescent pairs up with the planet Saturn on the stellar sphere. Depending on where you live worldwide, the moon sweeps to its most distant point from Earth for the month on October 24 or 25, 2017.