Spica – Virgo’s brightest star – will appear faint in the moon’s glare this evening. Jupiter will be blazing brightly nearby. 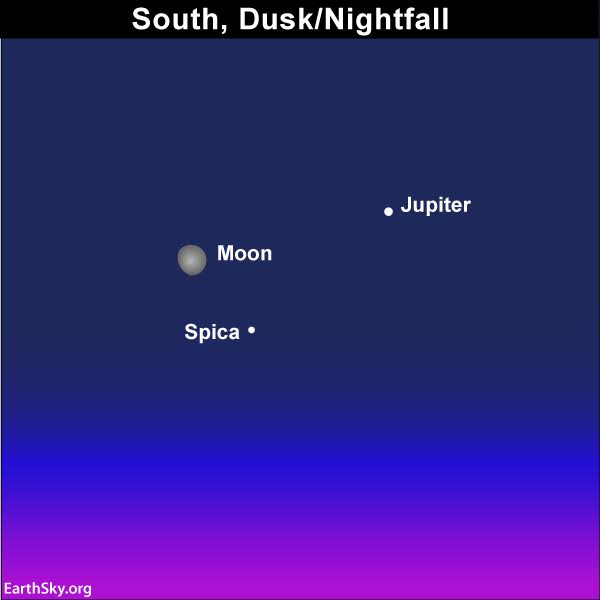 Tonight – June 4, 2017 – the moon couples up with Spica, the brightest star in the constellation Virgo the Maiden. That much brighter point of light near the moon and Spica is the giant planet Jupiter.

Spica ranks as a first-magnitude star; in other words, it’s one of our sky’s brightest stars. But the glare from tonight’s waxing gibbous moon might make Spica look meek this evening. Meanwhile, it’ll be hard to miss Jupiter, the evening’s brightest planet, even though it’s fairly close to tonight’s moon.

You can also look for the planet Saturn and star Antares on this June 4 evening. You’ll find them in the eastern half of the sky at nightfall and early evening (southeast from the Northern Hemisphere). 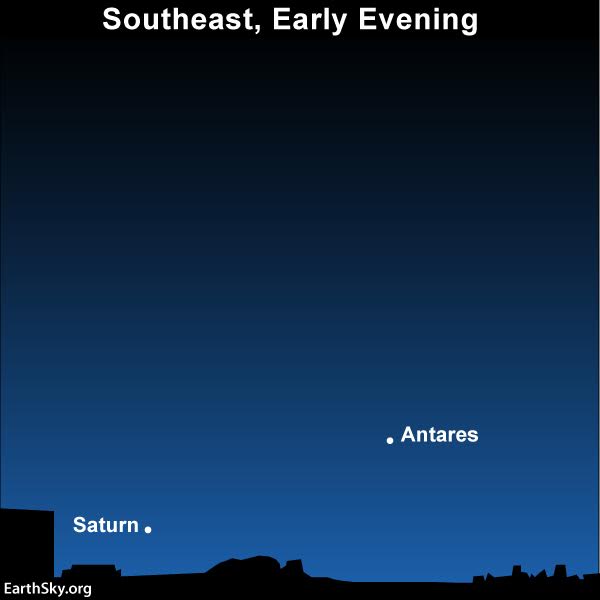 On these June 2017 evenings, no matter where you are on Earth, look in eastern half of the sky for golden Saturn in the vicinity of the ruddy star Antares.

Throughout the night, from everyplace worldwide, the moon, planets and stars will go westward across the sky. They go westward throughout the night for the same reason that the sun goes westward during the day: Earth’s west-to-east spin on its rotational axis. This apparent daily movement of the heavens caused by the Earth’s rotation is called diurnal motion by astronomers.

If you watch the moon from day to day, you can easily notice its true orbital motion around our planet. For example, over the course for the next several evenings, you’ll see the moon moving away Spica, and toward the the star Antares and the planet Saturn. 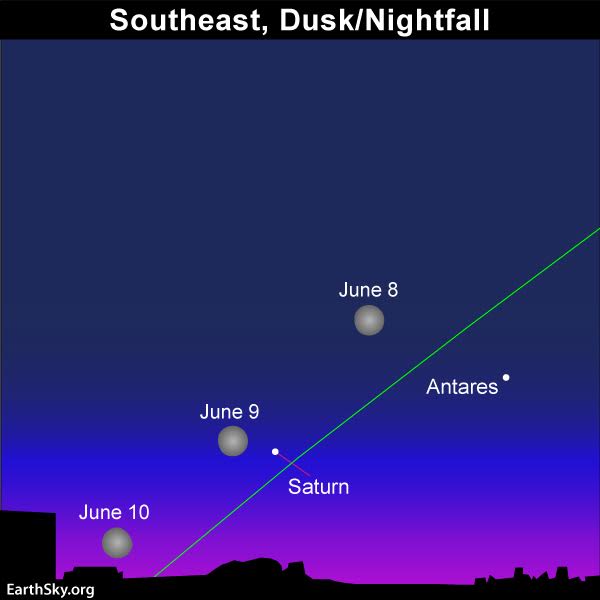 If you have difficulty spotting the planet Saturn and the star Antares this evening, let the moon help guide you on the evenings of June 8, 9 and 10. Read more.

As always, the moon goes full circle in front of the backdrop stars of the zodiac in a little less than one calendar month.

Bottom line: The June 4, 2017 moon is near the star Spica on the sky’s dome and the moon is heading toward the golden planet Saturn.